ST. LOUIS -- A couple hundred protesters marched in the Shaw neighborhood of St. Louis on Sunday night to remember two black men who were shot to death by white police officers in the past few months.

"Black lives matter!" the crowd chanted, as they held hands and blocked traffic at the intersection of Kingshighway Boulevard and Manchester Avenue. 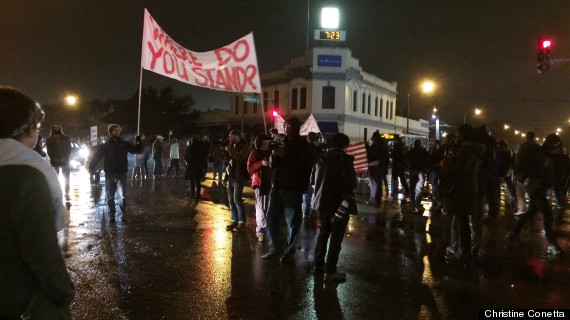 Demonstrators stopped several times during the march, and even blocked a major intersection for four and a half minutes to symbolize the almost four and a half hours Brown's body lay on the street before it was taken to the morgue.

Police arrived not long after the march began, and they blocked off streets for the remainder of the event. No arrests were made.

One reporter, Matt Pearce of the Los Angeles Times, was hit in the head by a flying object, possibly a rock, but appeared to be fine after medics treated him. The object hit him as several demonstrators gathered around a vehicle and got into a confrontation with a driver. He visited the hospital as a precaution, and did not need stitches.

Our victim @mattdpearce, post-treatment from the protest medics who he is now interviewing pic.twitter.com/oo7bM6KRNV

After the march ended, several members of the community came together for a prayer, reminding one another to stay safe and act peacefully after the release of the grand jury decision regarding Wilson, which is expected soon.

Linda Tirado, author of a blog post on poverty that went viral last year and the book "Hand To Mouth," also came out Sunday night to support the community's call to end police violence.

"If you can come here, you should come here," Tirado told The Huffington Post about the protests. "That is what we do as Americans, when we see someone's civil liberties be violated, we stand up and say we can't do that, and that's what's happening."