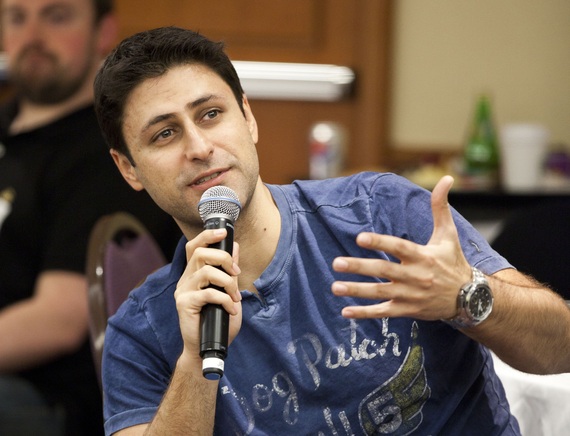 With the goal of harnessing the untapped potential of Iranian-Americans, and to build the capacity of the Iranian diaspora in effecting positive change in the U.S. and around the world, the West Asia Council has launched a series of interviews that explore the personal and professional backgrounds of prominent Iranian-Americans who have made seminal contributions to their fields of endeavour. We examine lives and journeys that have led to significant achievements in the worlds of science, technology, finance, medicine, law, the arts and numerous other endeavors. The following is our interview with Shayan Zadeh.

Shayan Zadeh is co-founder of Gear Zero. Along with Alex Mehr, Shayan started Gear Zero to rethink the way people work.Previously, Shayan co-founded Zoosk, one of the world's largest online dating platforms and a top 10 grossing app in the Apple App Store. Prior to founding Zoosk, Shayan was a program manager and software engineer for Microsoft. For more details, please click [here]

Could you give us a brief account about your life?

I was born to a middle-class Kurdish family in Iran. My father was an electrical engineer and my mom a high school science teacher. Given that background, education was always at the forefront in my family. I grew up in Urmia and finished my high school at NODET, the National Organization for Development of Exceptional Talents, surrounded by the best students in the state.

One of the greatest things that my parents did for me was introducing me to the hacker/maker culture. Given my father's electrical engineering background, he introduced me to building circuit boards and kits for building ham radios and such very early on. I developed a strong love of building stuff that has turned out to be the consistent theme throughout my career.

A few years later my parents bought me a Commodore 64 as a middle school graduation gift. They thought it's just the next generation of video game consoles but it turned out to be what changed my life's trajectory completely: I discovered software programming. I loved coding so much that my parents had to put time limits on my computer use, not because I was playing too many games but because I was coding too much.

At the age of 16 I already had summer jobs coding in local software companies with salaries that dwarfed other summer jobs and I loved doing it. That made major selection decision very easy: I wanted to become a software engineer.

After participating in the national university entrance exam, I managed to rank high enough (40th nationwide, top 10 in my state) to get into the best technical school in the country, Sharif University of Technology. At Sharif, I continued to develop my computer science skills. I also continued to work in the industry through internships as well as freelance projects.

Advertisement
Why did you decide to pursue a graduate degree in United States?

As I was finishing college, I had a major decision to make about my future. I could stay in Iran and have a successful career in my field. However, I felt the values that I aspired to and the opportunities that I wanted for myself were not available in my birth country. I wanted to continue my education and I knew I wanted to do so in US. All the breakthroughs in computer science were happening in United States universities and companies and I wanted to be part of that.

Despite difficulties of migrating to United States from Iran, I managed to move to US and continue my education at University of Maryland. There, I continued to follow my passion for building things and discovered entrepreneurship. Despite my drive and passion, there were still obstacles for me realizing the dream of building products for my own companies: meet the broken US immigration policy!

Since I knew what I wanted to do with my life now, I just needed a way to get my immigration status corrected. I decided why not kill two birds with one stone: I joined Microsoft as a software engineer to both learn how a big enterprise works and also get on the path for green card. During the five years at Microsoft, I not only learned a lot about software but also how to build and grow a team. I also managed to get my MBA at University of Washington.

What ignited the spark in you to start a business and how did the idea for your business come about?

While in grad school, by pure accident I attended a series of talks on entrepreneurship that was organized by the dean of engineering school at the time. The goal of the series was to introduce graduate students in STEM fields to an alternative career path. I don't remember much about the content of the talks but what stuck with me was the passion of the entrepreneurs presenting about their companies. I had never seen someone talk about their job like that before and I was instantly hooked! I wanted to be like that person.

Once I became a permanent resident, I knew I had to fulfill this dream. I regrouped with my best friend, Alex Mehr, who at the time was working at NASA and started our first company together: Zoosk. We knew we wanted to build a company where we could put our unique skills to good use but also make a positive dent in the world. In graduate school we both had focused on data mining and optimization. Once we realized we could put this algorithmic knowledge use and improve online dating we knew we had something special. What can be more positive than helping people meet the love of their lives. You impact that couple forever and that was a cause worth working hard for.

Advertisement
How different is Zoosk approach compared to other dating apps?

We took a unique approach to online dating with Zoosk. Based on psychology literature and our personal experiences, we knew if you ask most people who they are interested in, they either can't describe their ideal or the person they describe would be vastly different from the one they would fall in love with. So instead of asking people what they want on Zoosk, we look at their actions (who they approach, who responds back to them, etc) and optimize their experience based on this data. This differentiated approach, we call behavioral matchmaking, has been very effective for our 35 million members around the world.

In eight years, we grew Zoosk to 200 employees and $150+ million in revenue. On the way to this milestone, we relied on hard work of our team and support of amazing mentors and investors raising over $60 million in venture capital in the process. With the business thriving and an amazing executive team in place, last year we stepped back from the day-to-day operations of the company and took some time off.

What was the biggest hurdle to overcome? What have been some of your failures, and what have you learned from them?

I think throughout my career, the biggest hurdle for me has been my own mental blocks. In many instances, we have a hard time imaging big things because our brain is not used to thinking big. Once you overcome that internal obstacle, you can accomplish amazing things.

Entrepreneurship is an exercise in pushing the boundaries of what is possible. And failing and learning from your failures sits at the heart of this endeavor. Over the past decade I have made many business and product mistakes but every time I have been able to get up, dust myself up, and get back to work. The ability to learn from your mistakes but not allow them to keep you down is crucial to the having a successful career in any field but specially if you want to start a business.

Advertisement
To what do you most attribute your success? Do you believe there is some sort of pattern or formula to becoming a successful businessman and entrepreneur?

I think your value system has a lot to do with how you do in life. I have been fortunate to believe hard work is the foundation for every successful person. I have also learned to keep an open mind about everything and learn from the evidence that I see. These apply both in personal life and in business and have been the foundation of my life.

What has helped Zoosk become one of the world's largest online dating platforms and a top 10 grossing app in the Apple App Store?

I think in addition to having a differentiated approach to online dating with our behavioral matchmaking engine, we foresaw the explosion of the consumer mobile adoption and built a great product for iOS and Android platforms. We made significant investments on mobile way ahead of our competition.

We also knew that our behavioral matchmaking approach would translate very well to the mobile world. Since we didn't have to bother our users with long questionnaires on their mobile phones and just let them be who they are and observe their actions, we were able to build a delightful experience on mobile devices which has ultimately resulted in the success of the company.

Advertisement
What are you doing next?

I think once you have the bug of building stuff, it's really hard to get rid of it. So I am going at it once again. For the past nine months, I have been working with a small group of amazing people building my second company, Gear Zero. We are still in stealth mode but hopefully we can introduce our product to the world soon.

You were among a group of Iranian Americans world-class entrepreneurs who has published an open letter-a full-page ad in the New York Times- to support Iran deal. What did you get involved in this?

I am an American citizen now. And as a first generation immigrant, I have worked really hard to get that status. This country has been great for me as well. I have accomplished more in US than I could have even in the country I was born. Once President Obama announced the foundation of the deal with Iran, I felt like we have an opportunity to save our country, US, from human and financial loss, while making sure our national security is well served if we can prevent a potential military confrontation. The people of Iran want peace, prosperity, and the pursuit of happiness just as much as Americans do. And here we are presented with a win-win scenario for all sides involved. That's why when I saw I had a chance to join fellow Iranian-Americans to tell the the American public about this opportunity, I jumped on it.