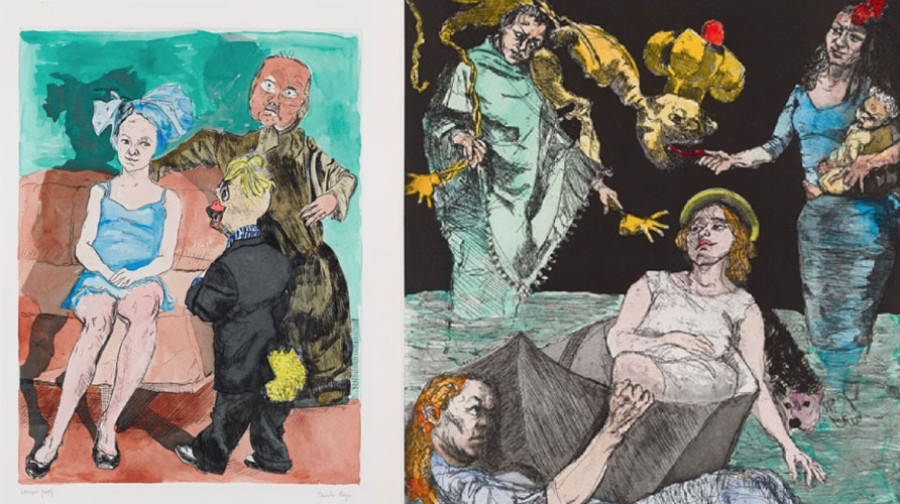 Paula Rego, DBE was born in Lisbon, Portugal in 1935. Today, at 80 years old, the artist is known worldwide for her spellbinding visual tales, weaved together from scraps of religious texts, fairy tales, myths, picture books, sexual fantasies and other abnormal manifestations. The gruesome and enchanting images tell mythical stories that never were, normally revolving around women -- whether old witches, breastfeeding mothers or Mary Magdalene herself.

"The grotesque is beautiful," the artist said in an interview with The White Review. "The grotesque is quite sexy. I just like the grotesque." Beneath the monstrous and mutilated adornments, Rego's work speaks of women's experiences, replacing domestic scenarios with surrealist nightmares.

Rego's work is at the center of "She Came to Stay," a cross-generational exhibition of women artists depicting women's stories, whether autobiographical, symbolic or abstract. Curated by Aretha Campbell and Lucy Farley, the exhibition takes its name from Simone de Beauvoir's book of the same name, an existentialist novel about a relationship gone awry, which explores themes including freedom and the other.

Beginning June 23, Rego's images will show alongside paintings by Eileen Cooper, Marie Jacotey, Lucy Farley and Annie Kevans, together yielding a rich vision of the female perspective, collaged from a variety of times and places. We reached out to the artists joining Rego to hear their thoughts on the exhibition. 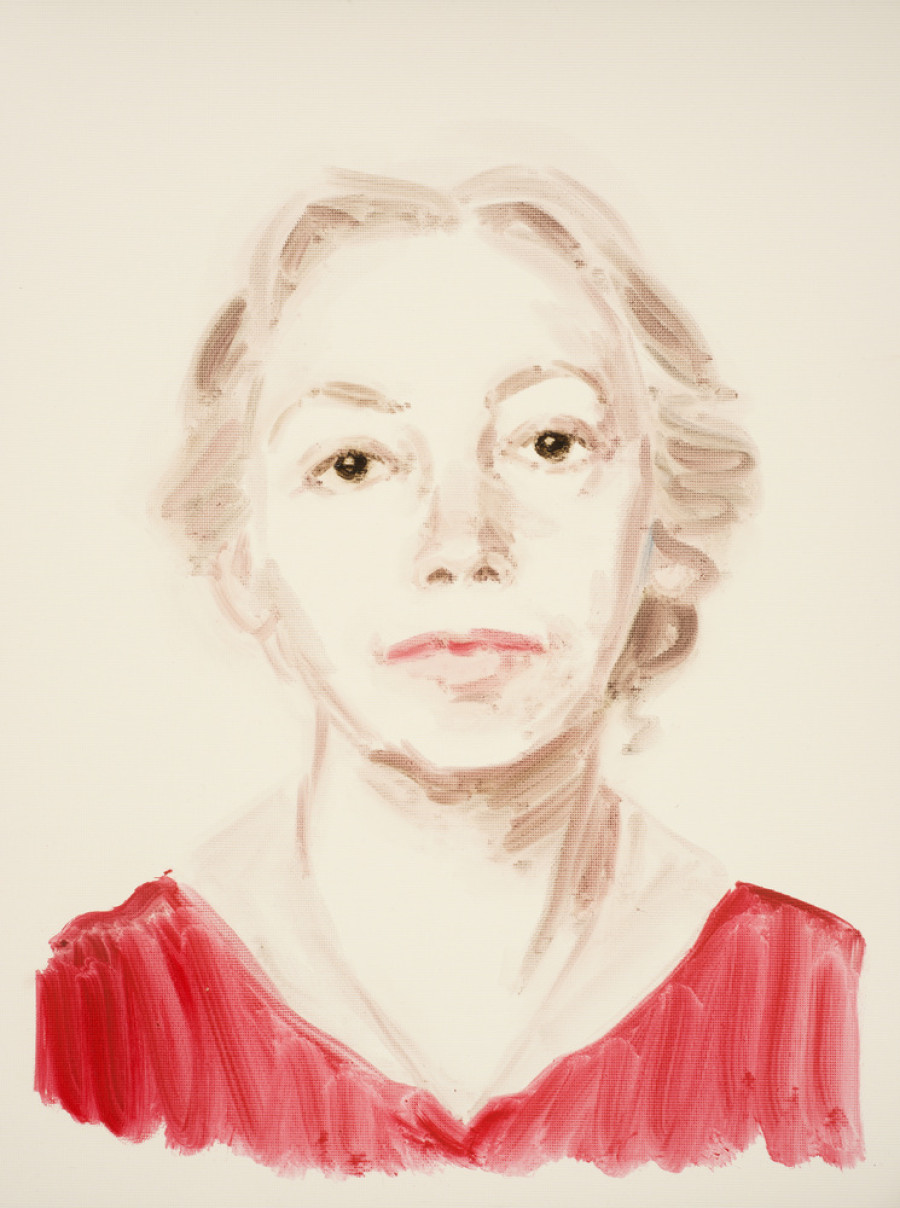 How would you say a woman's perspective has informed your work? I probably wouldn’t have produced my latest body of work had I been born a man. My series "The History of Art" depicts successful women artists from history who have been largely forgotten by modern audiences. It pisses me off because I am a woman and an artist. I was astonished to learn throughout the course of my research that, despite the massive obstacles in their path, many women managed to have successful careers as artists as early as the 16th century. Although many have been championed in the last decades having been "rediscovered" by later art historians, these women still remain "separate" from art history. Their work is consistently sidelined in major exhibitions and women artists are deemed only worthy as subjects within the secondary realm of feminist art history.

I chose to paint artists who were as successful and in some cases, more so, than their male counterparts, artists such as Sofonisba Anguissola who was the first Italian woman to become an international celebrity as an artist in her own time. Other artists are known for their personal lives but their works remain invisible. Despite being the first woman painter admitted to the Société Nationale des Beaux-Arts, Suzanne Valadon is more famous for her personal relationships with Renoir, Erik Satie and Degas. Likewise, Victorine Meurent is more famous for being the subject of Manet’s paintings than she is for being an artist. Her paintings were selected for the famous Salon numerous times including in 1876, a year in which Manet failed to get any of his work accepted. Like many of her female contemporaries, her name means nothing to the general public or to many female artists working today.

What do you hope to communicate through the exhibition? I hope that people will realize that, contrary to what Georg Baselitz says, there are numerous examples of "great" women artists in history. It would be nice if people could understand that women have suffered for centuries from being seen as "the Other" in a male-dominated art world. With more women graduating from art schools than men, it’s true to say we now constitute a majority that, paradoxically, is treated like a minority. 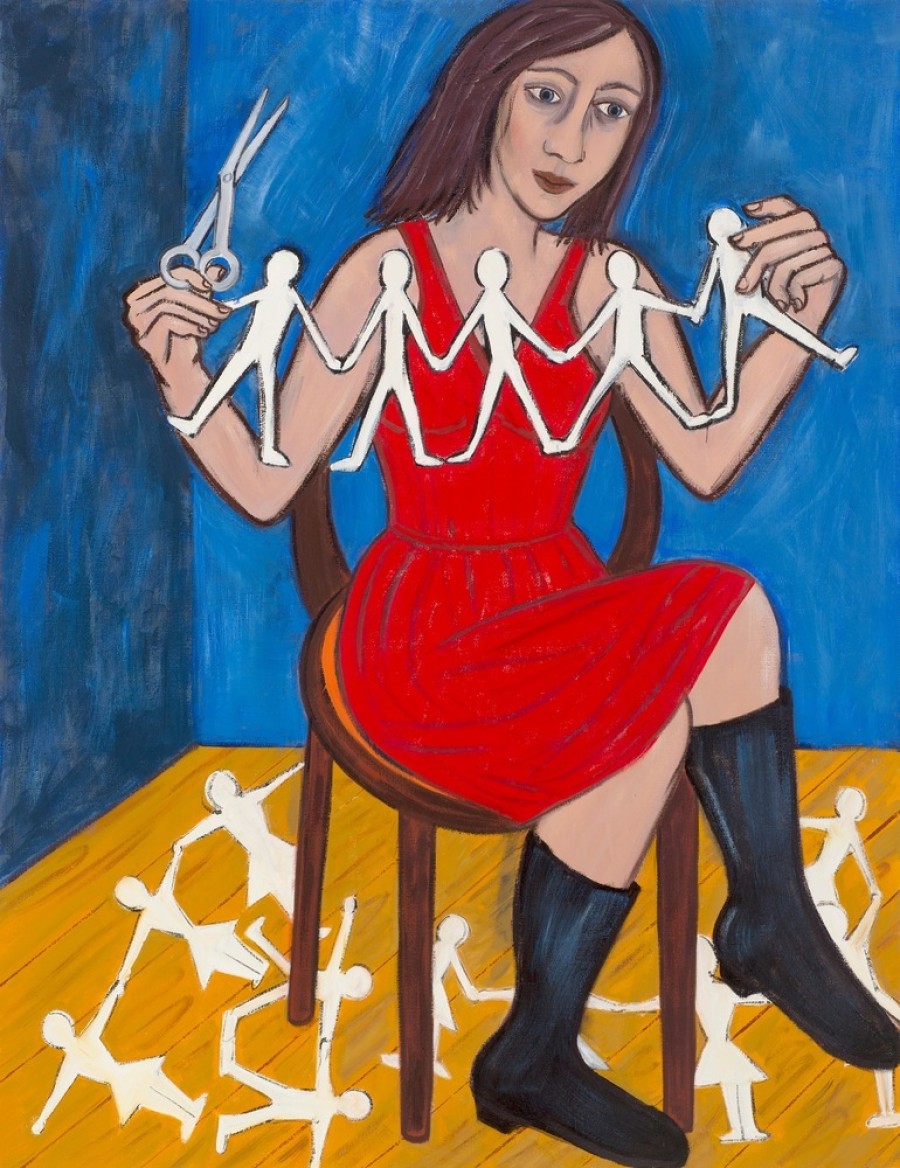 What do Simone de Beauvoir's words "She came to stay" mean to you? Perhaps it's about invasion, having to reconsider your position, personal space and identity compromised by another. How would you say a woman's perspective has informed your work? This is so intrinsic to my work, I find it really difficult to comment on. I never intended to use sexuality, birth, fertility , creativity, love and loss as my big subjects. Over more than 40 years as an artist, there simply was no choice.

What do you hope to communicate through the exhibition? A strong sense of female identity, which can take many forms. I hope my work is both personal and universal, the female figure has always been at the core of my practice. In my painting "Night Music," the couple is dancing closely together, but they both have closed eyes, independent in their personal worlds, but together, and involved in a dance which is both expressive and concentrated. 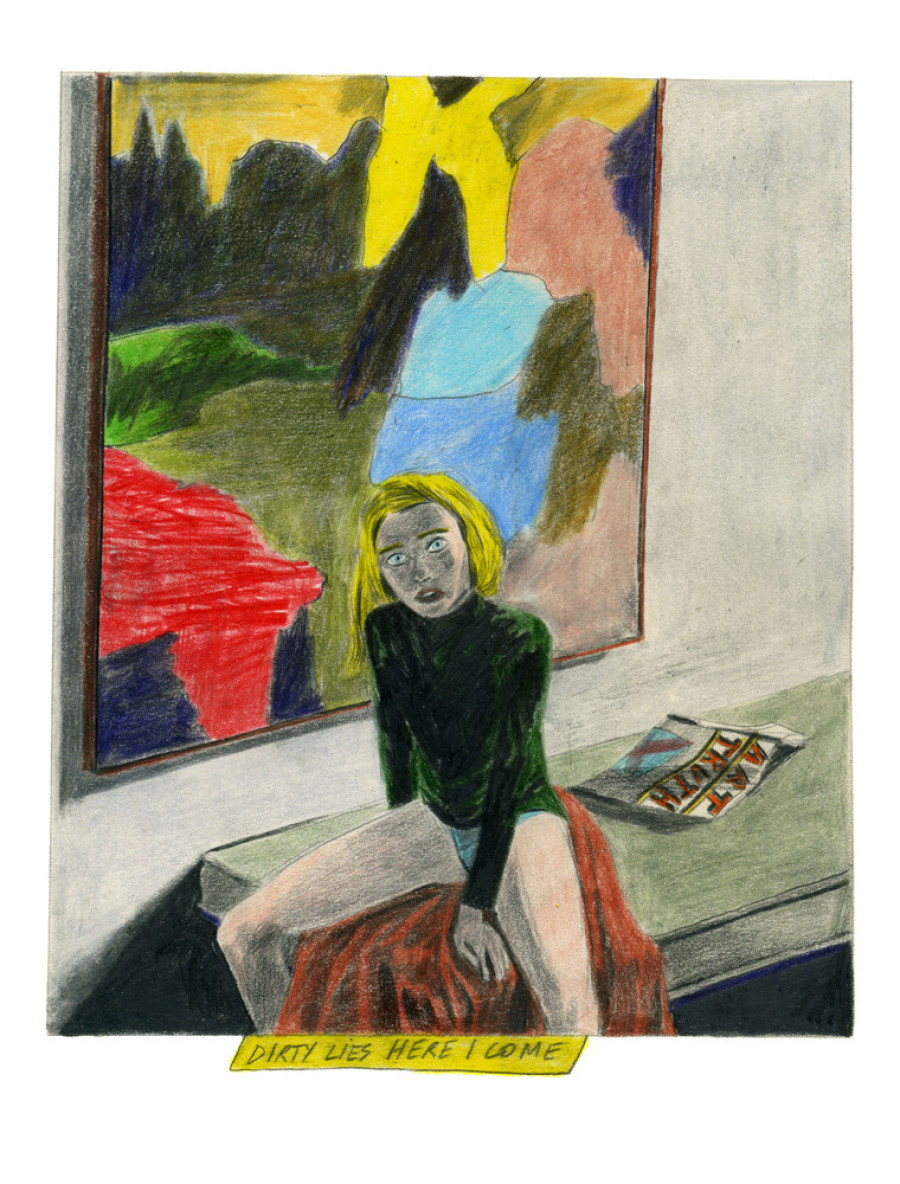 The interest of this sentence lies for me in this duality embodied in the book by the character of Xavière. Indeed, this young girl that arrives and overthrows the established order of Françoise's couple is, rather paradoxically, a very still element -- she refuses to change or only very reluctantly -- she is inanimate, she has no passion, no projects, but a very still element of chaos, which tears everything apart, precisely because her immobility questions the set dynamics of Françoise and Pierre.

I personally feel very close to this way of exploring through the fictional observation of relationships the turmoil brought in when questioning the meaning of life; to some extent those same questions are what I am trying to convey through my overall work. How we deal with this terror of our own finitude and the conscious of our loneliness is a main subject for me.

How would you say a woman's perspective has informed your work? I wouldn't be able to describe precisely how a woman's perspective has informed my work, mainly for I feel, especially in the texts coming most often with my drawings, that there is a very strong sense of a masculine voice running through them. Actually, I even have the sentiment that, a lot of time, to draw I need to embody some other identities, a bit like in a theater play, that allows me to play indifferently male or female parts. This said, my work depicts rather obsessively women, and I guess my fondness for this particular topic is being born from the fact that I am myself a woman. 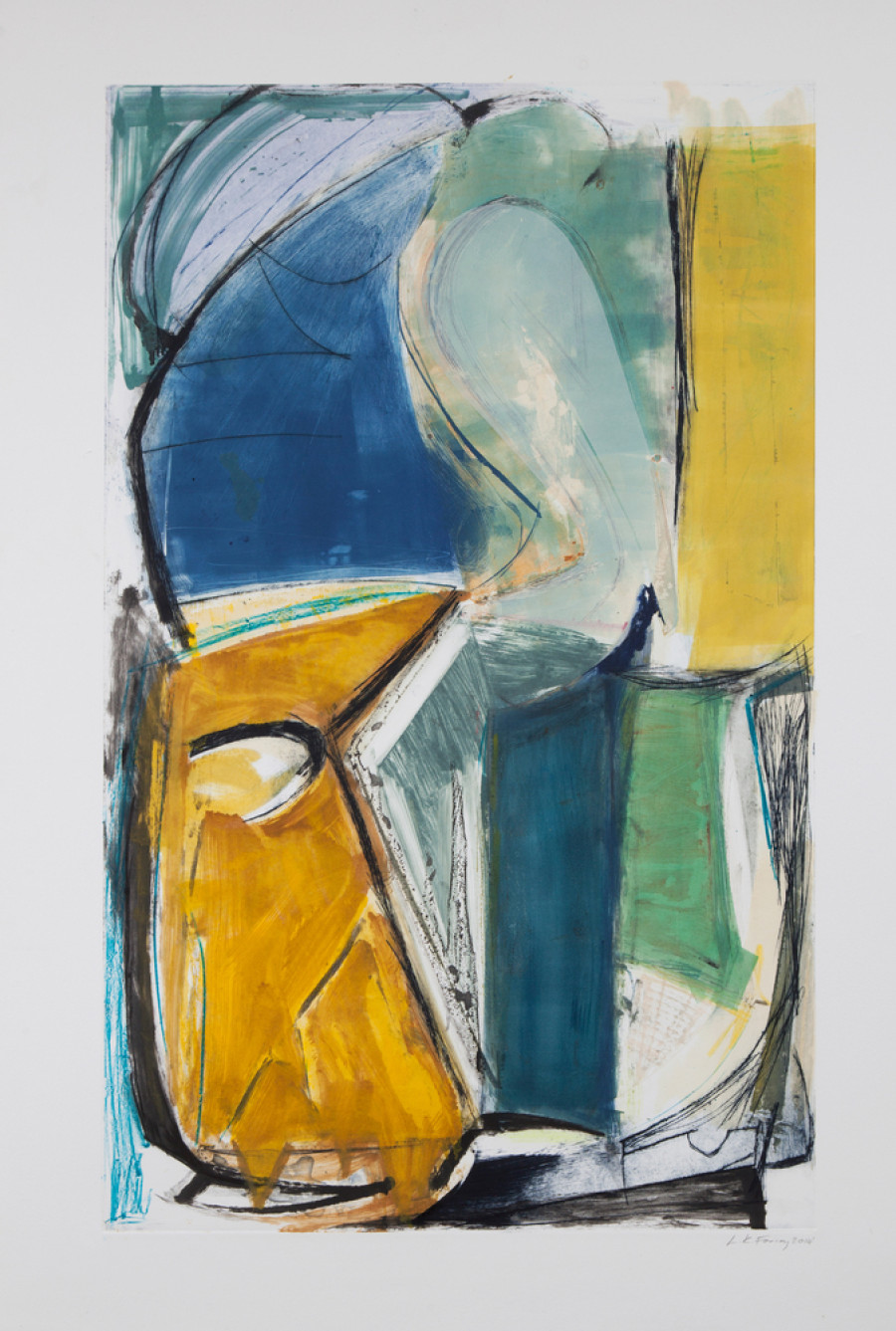 What do Simone de Beauvoir's words "She came to stay" mean to you? I'm interested in the ambiguity of the title -- there is a fleetingness to it in the sense of "just passing through" before heading off into a new experience which is wide and open but at the same time it can have a permanence to it, as in coming to stay and claiming territory, to mark ground, which implies something far more loaded with a sense of foreboding.

The title leaves it wide open for readers or audiences viewing work and echoes the sense of ambiguity that is present in all of de Beauvoir's writing. There are meanings and values, but it is up to each of us to discover, create or reveal them.

How would you say a woman's perspective has informed your work? The novel She Came to Stay is a meditation on the Hegelian problem of the existence of the other. The novel questions the extent to which coexistence is possible and deals with the central existentialist theme of letting others absorb one's freedom, which are themes that I am dealing with in the new paintings: My current body of work is the result of a preoccupation with the possession of space, both mentally and physically and the human need to re-claim our territory, whether it be against each other, in nature or in the virtual world.

What do you hope to communicate through the exhibition? The show muses on various "states," be it physical or of the mind of the individual artist, and expresses the always tenuous and questioning aspect of human consciousness, the human tendency to ask, Why?

My aim in this exhibition is to communicate the messier side of a shared existence which is often covered up to suit what we wish to project. In today's world, where there are an abundance of "virtual spaces" being created to inhabit and project a series of manipulated untruths, [my artistic influence] Jean Cooke's self portraits are the polar opposite -- devoid of the need to impress but more importantly address the "true set of circumstances."