Sheida Soleimani learned early about injustice. Her parents, outspoken critics of the Iranian government, fled the country during the regime collapse of the 1970s, alongside so many moderates. Sheida’s mother was imprisoned and tortured on her way out, forced to endure an indefinite period of time apart from her husband and eldest daughter, Sheida’s older sister. Her father was luckier: he made it across the mountains to Turkey, eventually cutting a path for himself and his family to the bovine calm of the midwestern United States. 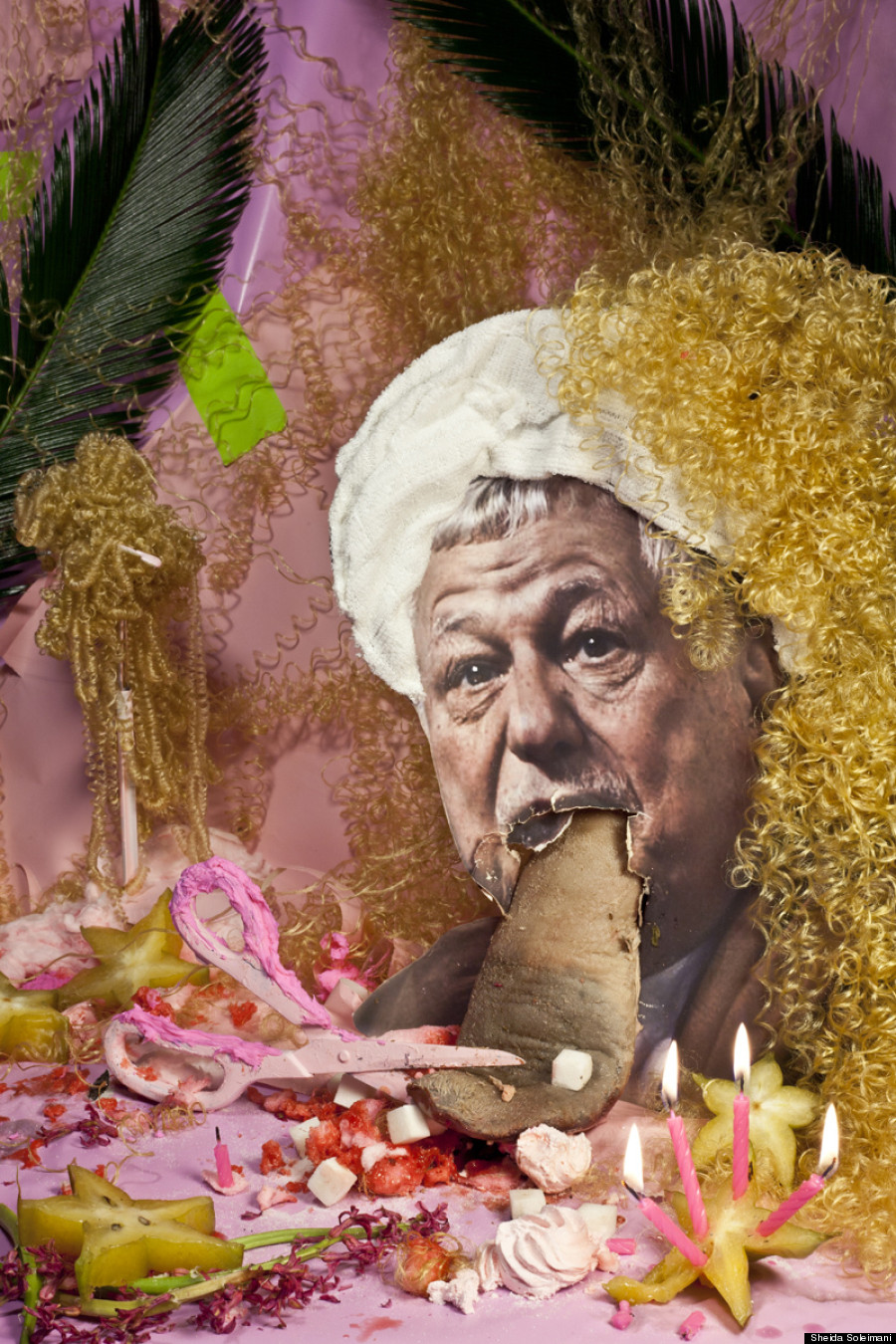 This is where Soleimani grew up, going to school with kids who asked her excitedly about magic carpets (circa the release of "Aladdin"). Despite the relative peace of her childhood, wounds are embedded in the work she makes today. A 24-year-old MFA student in Detroit, she has caught the eye of art bloggers captivated by her disturbing collage series, "National Anthem."

Her Chagallian take on Soviet-era propaganda art mixes images and objects of her own making with what she calls a “deep ongoing database” of photographs sourced from Twitter. Soleimani's subjects range from the bruised bodies of enemies of the state, to native Iranian foodstuffs like pomegranates, rice and octopus. In these dreamlike tapestries, she filters the story of today’s Iran through the spirit of her family's personal history. 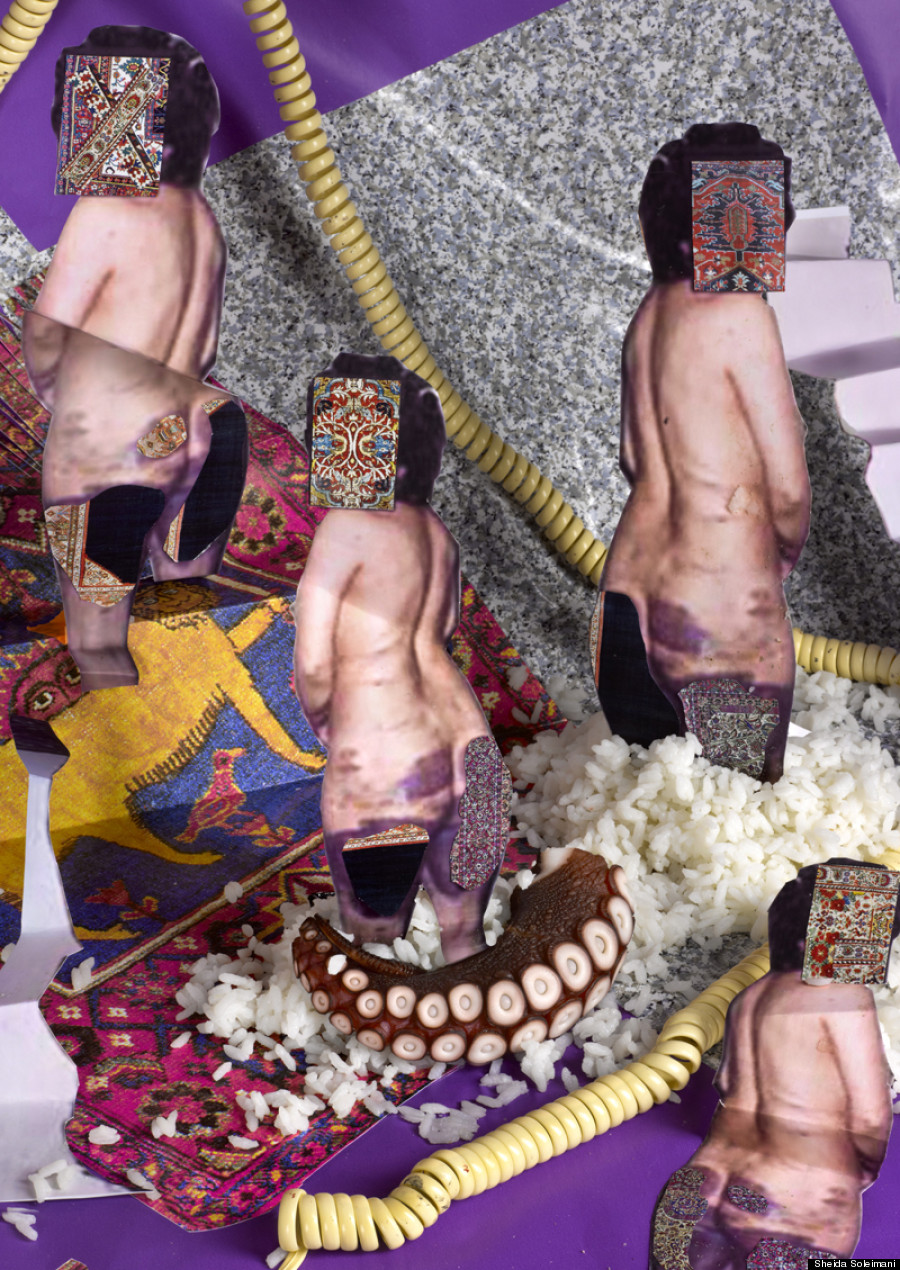 The image above is built heavily from a photograph circulated on Twitter in 2013, of a woman punished by government officials after supposedly speaking against the Iranian government. "They censored her face, but you can see how completely bruised and tortured she was," Sheida said by phone. "The caption in Farsi was 'Victim of the Islamic Republic.' I thought that was pretty poignant. She's clearly a victim. She looks like a woman whose husband beats her." 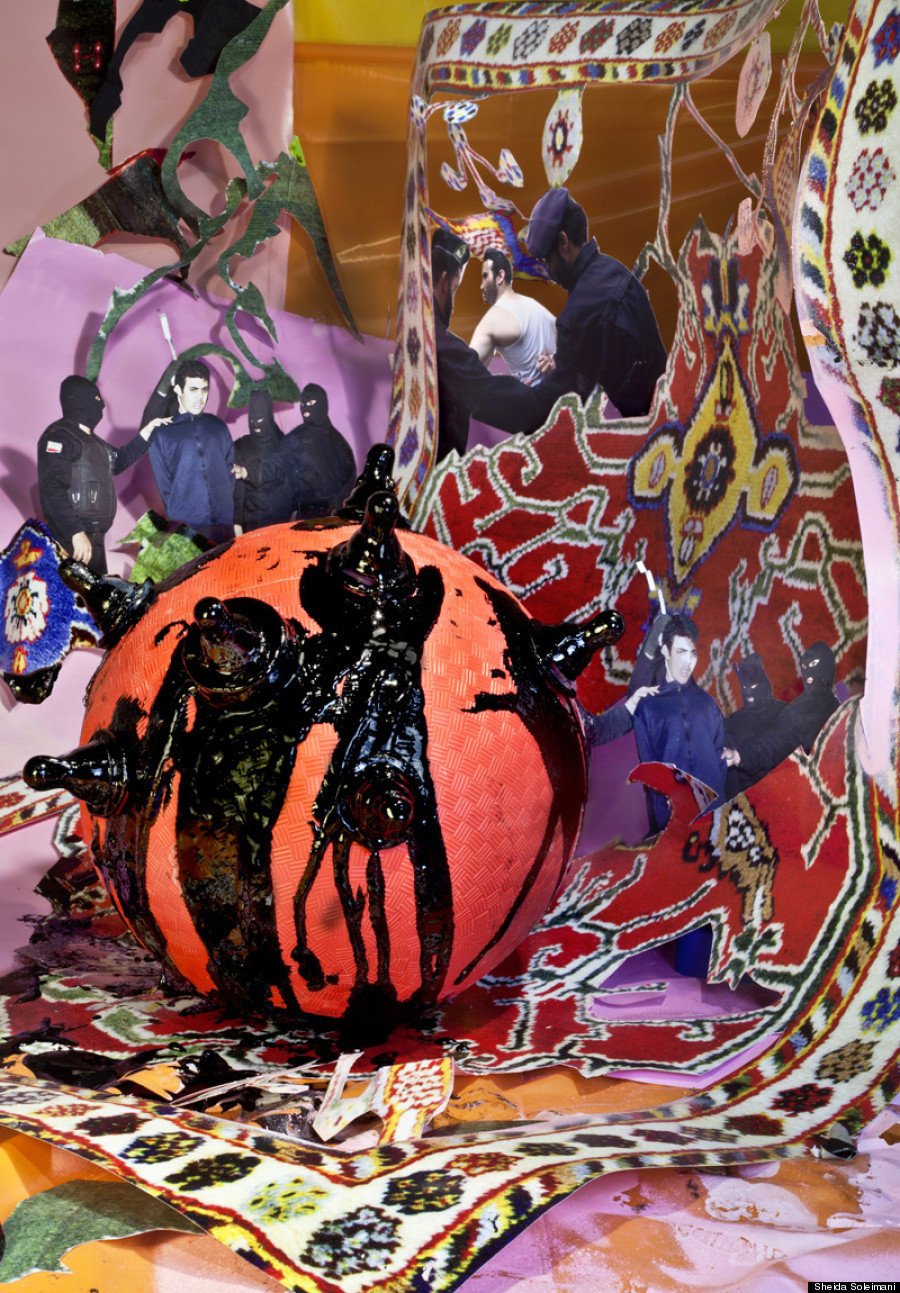 Communist propaganda posters made use of symbols to reach illiterate peasants -- for instance, agricultural imagery to promise prosperity. In a nod to this visual tactic, Sheida weaves in Iran's GDP-boosting products like rice and seafood. She also questions the role of Orientalism in how Iran is seen by way of squares of carpet patterns, which often approximate the censoring motif of the original media images. Her objects have "specific symbolic heft," she says. "I think of that severed octopus tentacle," she says, "broken but still grasping, like the woman." 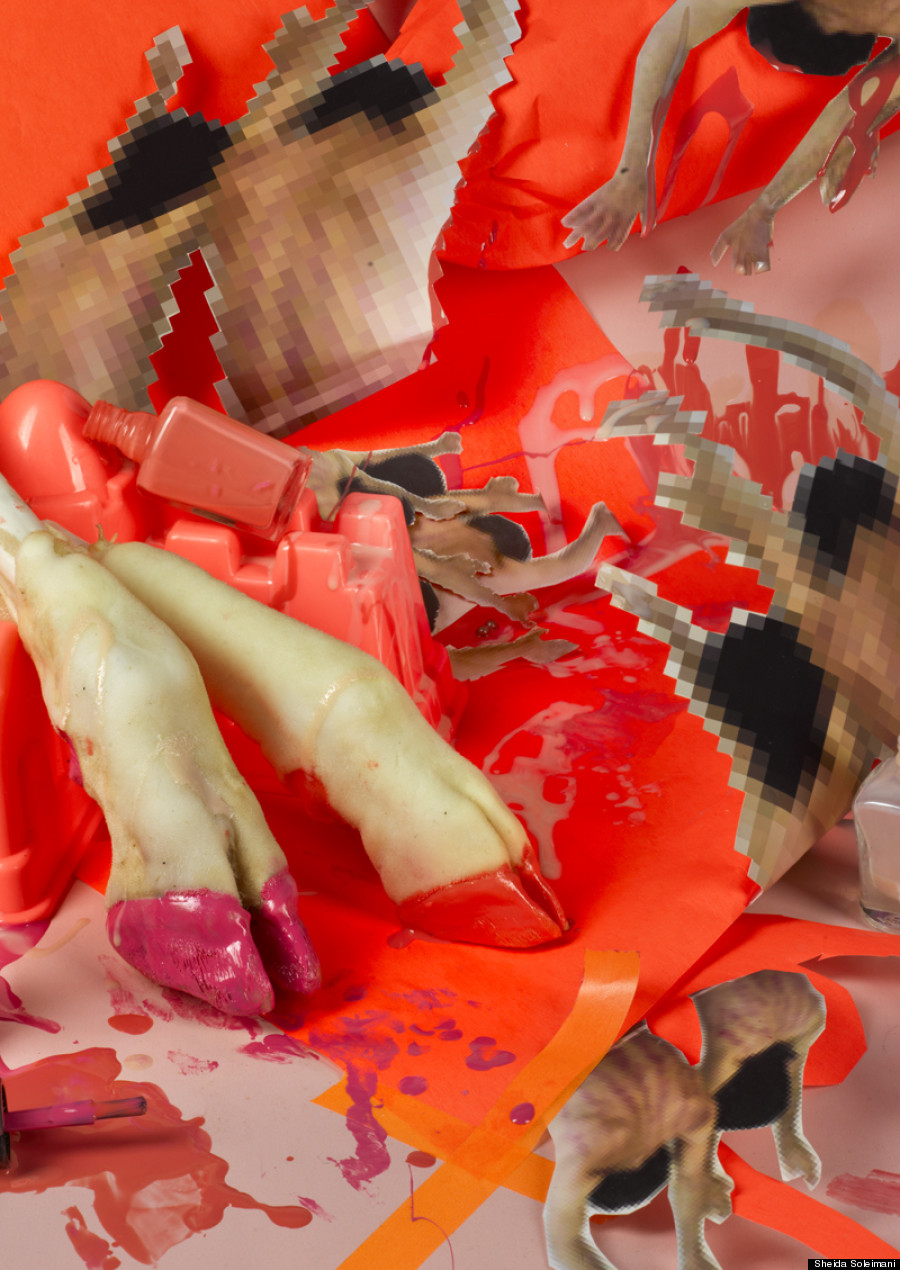 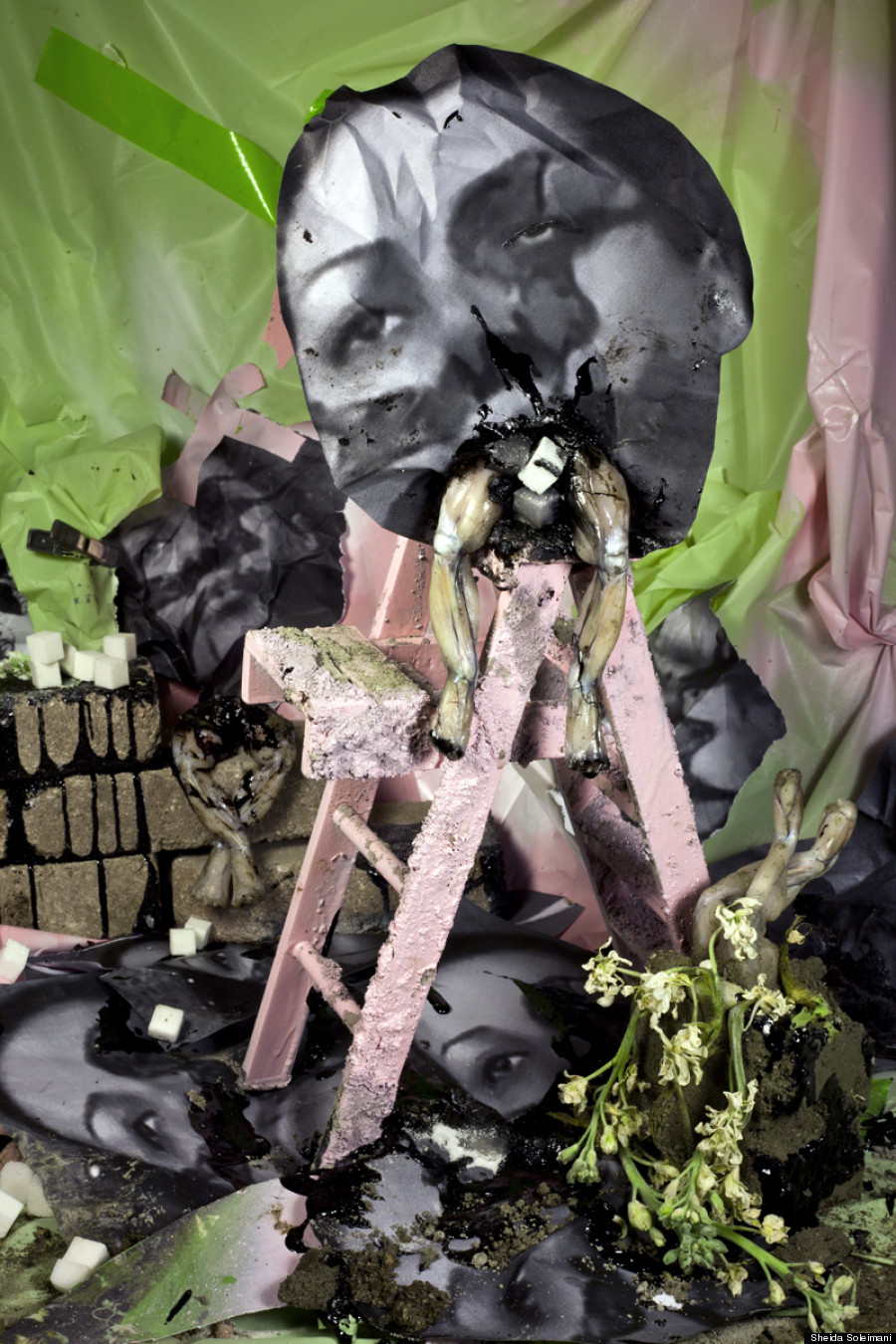 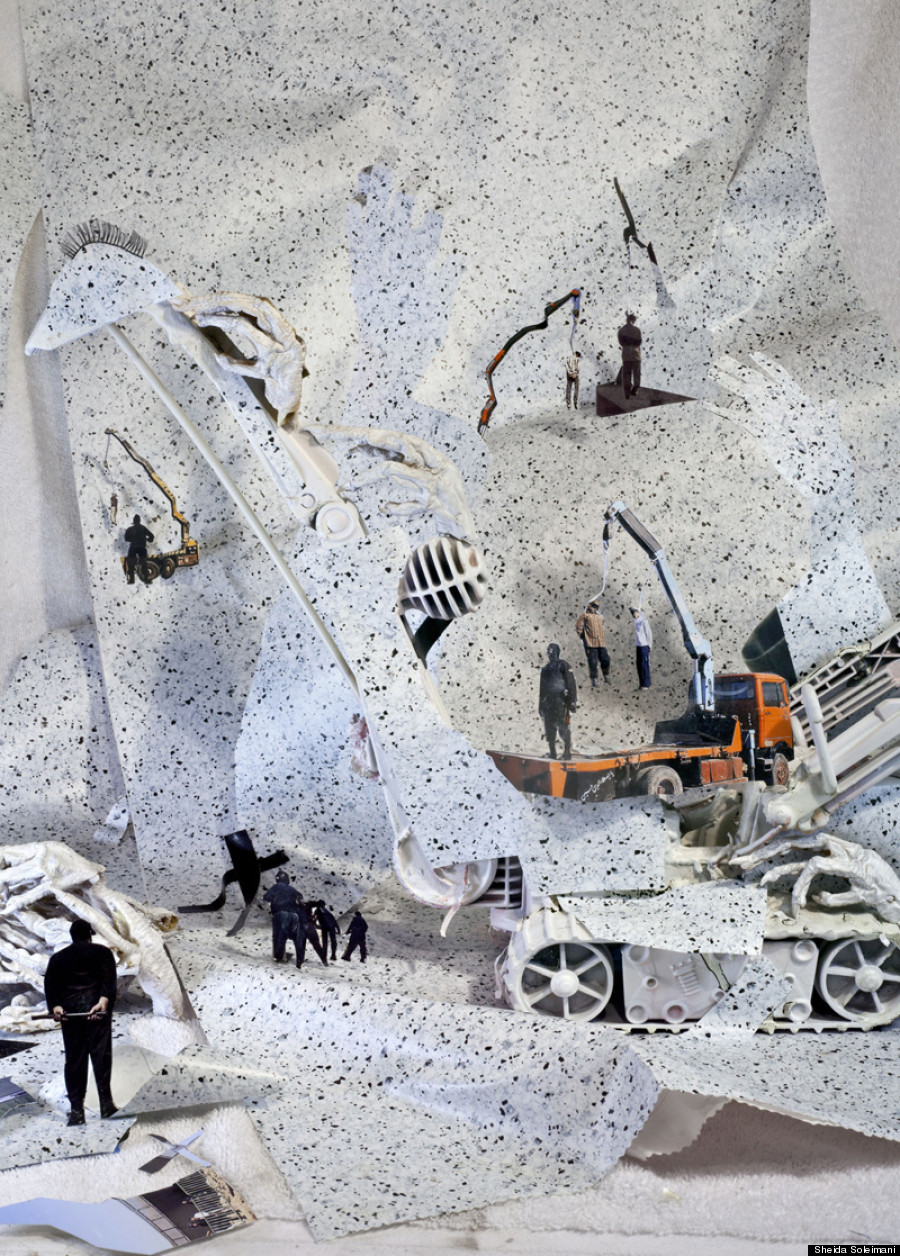