Caveh Zahedi is a New York based filmmaker known for pushing people's buttons. In "I Don't Hate Las Vegas Anymore," he tries to get his Persian father to take Ecstacy with him, and in "I Am A Sex Addict" he confronts lust and fear of commitment. In his latest docu-comedy, entitled "The Sheik and I," the director takes on political repression in the Middle East. The film was commissioned for the 2011 Sharjah Biennial in the United Arab Emirates. Since the only explicit rule to the "transgressive" biennial was that Zahedi could in no way make fun of the Sheik, he decided to do just that. Thom Powers, the Toronto Film Festival's documentary programmer, allegedly said the film was "deeply troubling for its breach of documentary ethics and reckless behavior.” We recently spoke to Zahedi over the phone about his contentious film, which he claims was blacklisted by Powers. Scroll down for a trailer of the film.

The Sheik and I Trailer - 2 minutes from Caveh Zahedi on Vimeo.

HP: What was your approach with this film? Were you trying to be an ugly American?

CZ: I was trying to make the best film I could, which probably means being an ugly American. I couldn’t be sensitive.

HP: In the film, you constantly mishear what your son is saying, to humorous effect (as seen by the translated subtitles). What was the purpose of this?

CZ: One of the keywords for the theme [of the Biennial] was "communication." The film is so much about miscommunication, so there was that. Also, the sense that I am clueless on one level in many ways, and the question of the film versus sensitivity -- I’m constantly sacrificing human connections for other goals. I’m so caught up with my film that I can’t recognize his needs, so it’s critical of myself.

HP: You fully display your ego on film when you show us these moments of vanity (e.g., choosing the appropriate shirt to wear or best shot of you). Is it best to approach the ego head-on? Why?

CZ: I really think the ego is the main problem in life, but it’s a really tricky problem. Often spiritual paths involve denial of ego and pretense. Putting it all out there is the best way [to live]; being conscious of it is the best way to address it. Not try to hide it or destroy it, but accept it consciously but critically.

HP: Why is it necessary to understand our egos? How is documentary film addressing this issue?

CZ:I was a Philosophy major in college. The ethical questions in documentary films are exciting; no one knows what’s good. My main critique of my critics is: it’s better to just be honest about these things than try to control how they will be read by others. It's important to leave plurality of interpretation.

What’s great is that the film always exceeds your intentions. The camera captures stuff you're not aware of and that you couldn’t formulate. In that sense, it’s more honest than you are. By letting it be as it is, it’s just richer. That’s my problem with Hollywood or fiction films in general -- it’s rare that they exceed the intentionality of the director. It’s a good cinematic strategy in general to allow as much of the world into the frame as possible.

HP: There's been charges that the film is exploitative -- that you’re ruining careers and endangering lives. What's your response to this reaction?

CZ: A lot of people hate the film for different reasons but one thing I wanted to do was show that Middle Easterners are complicated -- they’re not horrible or saintly.

In almost every film I’ve made there’s something I don’t say. In Vegas, my dad was a hypochondriac. He didn’t really have a heart condition; I was pretty sure nothing would happen to him, and I relented eventually. It made me look bad, but it wasn’t going to hurt him.

But this film, I could really impact people -- people who had been nice to me and were vulnerable. So it was hard. And I still don’t know if it’s the right choice [to release the film], but in the absence of certainty it’s kind of crazy to self-censor. I guess I’m a free speech absolutist. If we had a crystal ball that said, this person will die, then I wouldn’t do it. But we don’t have a crystal ball here.

There’s more respect for life when there’s freedom of speech. I’ve been reading Salman Rushdie's new book. Forty people died because of [the fatwa following the publication of The Satantic Verses], but did they really die because of him? There’s anger against the West because of racism and colonialism. You could say they died because he wrote a book, but he didn’t do anything wrong. There are things in the world that sparked that match that created a fire. He must have felt horribly guilty, but at the end of the day, he didn’t commit a crime -- other people did. That’s how I feel about it.

People are afraid because of Rushdie and [the film] "The Innocence of Muslims;" people are afraid to speak out against Islamic terrorists. My thing is basically there’s no freedom of speech or freedom of the press if people think they’re going to die for what they say. [The terrorists] can impose their laws on us this way, because they kill people and successfully intimidate everyone. That’s really what this film is about -- internalizing the censor.

"The Sheik and I" will be released in select theaters on Dec. 7. Find more information about the film here.

PHOTO GALLERY
'The Sheik And I' Photos

I Was Blacklisted By Thom Powers from Caveh Zahedi on Vimeo.

Correction: In an earlier version of this interview, we mentioned that Zahedi claimed the film was blacklisted at the Toronto Film Festival. This is not the case. We regret the error. 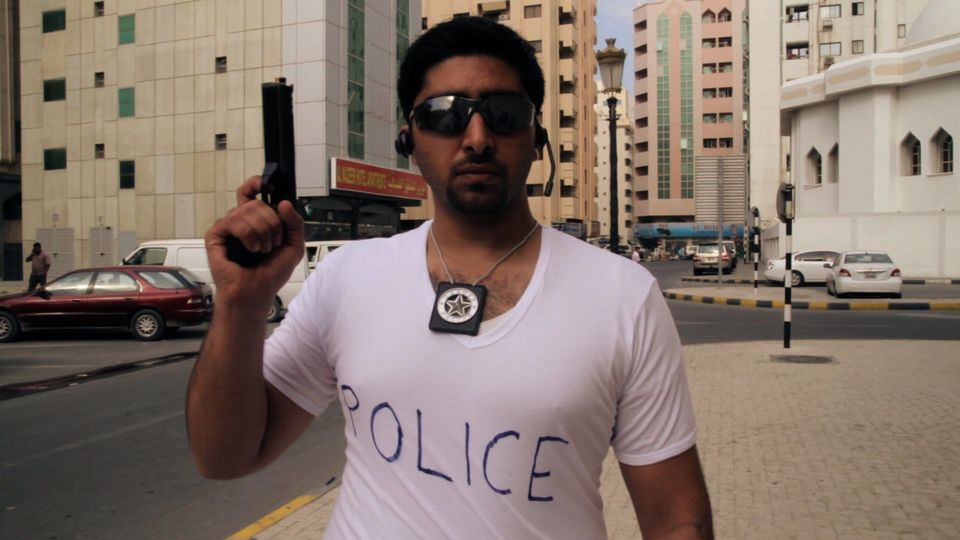