Twenty years -- almost to the day. Last weekend marked the anniversary of meetings between officials from oil giant Shell that led to alleged human rights abuses at issue in a landmark Supreme Court case known as Kiobel v. Royal Dutch Petroleum. The Court, considered by many to be the most corporate-friendly Supreme Court in history, could issue a decision as early as Tuesday as to whether Shell -- or any company -- can be held legally accountable for torture, extrajudicial execution, and crimes against humanity. Shell's position is sweeping and bold: Let us make over $30 billion off communities' and their homelands, but leave us off the hook when these operations lead to gross human rights abuses.

From February 15-18, 1993, Shell officials gathered in the Netherlands and the UK to develop a plan to "restore law and order" in Ogoni, Nigeria, where more than 300,000 villagers and citizens had peacefully protested Shell's environmental destruction of their homeland. This nonviolent grassroots Ogoni movement had managed to disrupt Shell's oil operations in one corner of the Niger Delta, threatening a significant source of revenue for both the oil company and the Nigerian regime.

At those February meetings, Shell formulated a strategy that included using the Nigerian military and police to suppress the indigenous protesters. The plaintiffs say, in court documents, that Shell knew "that the means to be used in that endeavor would include military violence against Ogoni civilians." Those same documents describe the details of the "usual assistance" that the government provided on Shell's behalf: Nigerian troops equipped with Shell helicopters, boats, and automatic weapons committing attacks on villages and communities engaged in the protests; massacres of hundreds of civilians, widespread property destruction, displacement of tens of thousands of people. The plans that were hatched at those meetings 20 years ago culminated in the arrest, torture and execution of a group of community leaders known as the Ogoni Nine. One of those men was Dr. Barinem Kiobel. His wife, Esther, who also suffered violent abuse by the military, sought justice against Shell in U.S. Courts. 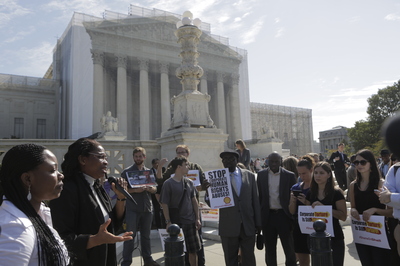 When Shell leaders sat down in their corporate headquarters to develop their plan of attack, they knew this: the Nigerian army and police would commit human rights abuses on their behalf. And they thought they knew this: they'd be able to get away with it.

This Supreme Court has already ruled that companies have a First Amendment protected right to purchase elections. Now it should recognize that when corporations are granted the same rights as human beings, they must also be endowed with the same responsibilities. Shell is hoping for the contrary: that the bet it made in 1993 -- that the courts will privilege business over people and universal human rights -- will pay off in 2013.