In 1990, a popular nonviolent movement for human rights and environmental justice burst forth from the Ogoni region of the Niger Delta. The Movement for the Survival of the Ogoni People -- 'MOSOP' -- demanded an end to the exploitation and degradation of the Ogoni land and people by the Nigerian dictatorship in partnership with the multinational oil companies, particularly Anglo-Dutch giant Royal Dutch Shell.

Few people outside of Nigeria noticed at first.

But MOSOP had a secret weapon and his name was Ken Saro-Wiwa. A charismatic renaissance man, Ken was a former civil servant, a businessman, and even writer and producer of a hugely popular sitcom in Nigeria called Basi & Company.

Best known as a brilliant novelist, playwright, and columnist, he was nonetheless relatively unknown outside Nigeria in 1990. In a few short years however, Saro-Wiwa's name and the cause inextricably and forever linked to it, were known around the world.

Unfortunately, his was a martyr's fame. 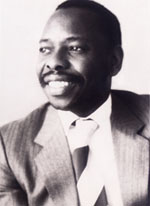 Early on a Friday morning in the Fall of 1995, Ken Saro-Wiwa and eight of his colleagues were led to the gallows in the prison yard of the jail in the Niger Delta town of Port Harcourt, Nigeria. The 'Ogoni Nine' were
hanged
on November 10, 1995.

The nine men were sentenced to death by a special military tribunal set up to try them for the murder of four prominent Ogoni men who were killed during a mob riot. To this day, many believe the murder of these men -- who included former MOSOP leaders and close associates of Saro-Wiwa's -- was orchestrated by the military to provide an excuse for exactly the kind of crackdown that ensued.

At the military tribunal, Ken made an extraordinary closing statement in which he singled out one guilty party above all others:

"I and my colleagues are not the only ones on trial. Shell is here on trial... its day will surely come and the lessons learned here may prove useful to it, for there is no doubt in my mind that the ecological war that the company has waged in the Delta will be called to question sooner than later, and the crimes of that war be duly punished. The crime of the company's dirty wars against the Ogoni people will also be punished."At the time, few dared to believe Ken's prophecy. And yet...

Next Wednesday, May 27th, a landmark trial will open in U.S. federal court in Manhattan at which Shell must finally answer to charges that it conspired with the Nigerian military to bring about the execution of the Ogoni Nine. It also faces charges of arming, financing, and transporting the Nigerian military, which conducted brutal raids that resulted in countless killings, beatings, arrests, and the wholesale destruction of villages throughout the Ogoni region. 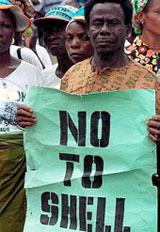 For decades, Shell had been the major operator in the Niger Delta, and mountains of evidence point to a shameful collaboration with the military to brutally stamp out the Ogoni resistance.

More than thirteen years later, the families of those murdered by the Nigerian military in conspiracy with Shell will finally get their day in court. And Shell, Europe's largest oil company and one of the most profitable multinationals on the planet, will, in United States Federal Court, answer to charges including arbitrary arrest and detention, inhumane treatment, torture, summary execution, and crimes against humanity.

From the beginning, this effort to hold Shell accountable has been a true David & Goliath struggle, with impoverished Nigerian villagers and their scrappy human rights attorneys facing down a multinational oil giant with seemingly endless reserves of money to pay high-powered corporate attorneys and public relations firms.

That this trial is finally making it to court is truly historic, and a finding against Shell would send shockwaves -- of the very best kind -- through corporate boardrooms around the world.

However, even if justice is found in the courtroom, too many people of the Niger Delta continue to suffer the terrible legacy of fifty years of Shell's operations in their land.

That's why a handful of organizations working in North America, Europe, and Nigeria have organized an effort called ShellGuilty -- to highlight Shell's crimes and to push for an end to one of Shell's abuses that Ken Saro-Wiwa and his colleagues ultimately died fighting against, and yet still continues today.

It's called gas flaring, the destructive and wasteful practice of burning off the gas released in oil extraction activities in massive fires that send toxic plumes of smoke and soot into the air. It's a practice that is devastating to local ecosystems and poisonous to local communities, and Shell would never get away with it in the U.S. or Europe. And in fact, it's a practice that puts us all at risk by emitting dangerous amounts of greenhouse gases that are fueling our climate crisis.

Despite court rulings and multiple promises by Shell over many years to stop the practice, Shell continues to make excuses, apparently unwilling to do the right thing if it cuts into its massive profits.

With this landmark trial around the corner, Ken Saro-Wiwa's famous last words become a more urgent appeal than ever before to all of us who care about corporate accountability, human rights, environmental justice, and peace:

"Lord take my soul, but the struggle continues..."

Please, take action now to send a letter to Shell's CEO Jeroen van der Veer and demand an end to gas flaring. Then visit www.ShellGuilty.com, where you can learn more about our campaign, and help us turn up the heat on Shell while they're on trial -- and in the spotlight.

Watch this space for more commentary on the efforts to demand an end to the monstrosity of gas flaring once and for all, the historic Wiwa v. Shell trial, and the momentous implications of this case.