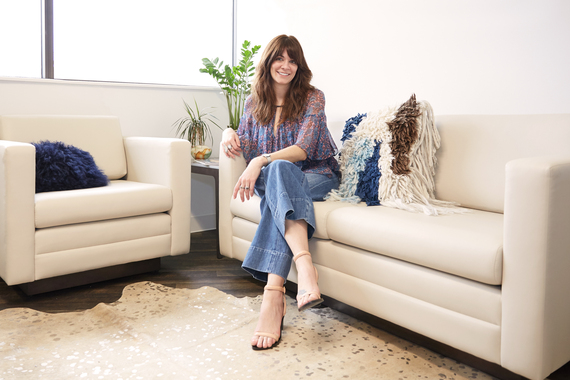 You graduated from Dartmouth with a degree in Economics. What was your path that led you to Destination Maternity and A Pea in the Pod?

I majored in economics because I had a love for quantitative problem solving and planned to pursue a career in investment banking but I also had this love for fashion.
During my senior year, I realized becoming a buyer would allow me to chase both dreams. I applied and was accepted into the Bloomingdale's buying training program. There I learned everything I could ever want to know about financials. My personal life later brought me to Philadelphia and I was fortunate to land a position at Urban Outfitters. During my time there, I had amazing role models and was able to explore both the design and creative sides of the business. I learned how to build a private label assortment, concept trends, and most importantly, serve the target customer. It was one of the most creative places anyone could work.
Destination Maternity®, which also owns the Motherhood Maternity® and A Pea in the Pod® brands, reached out to me last year to ask if I wanted to interview for the role of Vice President of A Pea in the Pod. I was intrigued by the opportunity professionally but also personally.
I have two sons, now six and eight, and when I was pregnant with them, I had a really tough time shopping. I was usually able to find whatever I wanted easily but the options felt really limited during pregnancy. What I was going to wear for the next year became an undue source of stress and I often thought about how much I would like to change that experience for other women.
When the call came for the interview, I felt ready to take all of my great experience and to embrace a new challenge. It was essentially a dream come true.

You re-launched A Pea in the Pod in 2015 focused on the modern, millennial consumer. What was this process like and what made that successful?

At Destination Maternity, our customer is mostly new every year. To reach new women constantly means that we must continually change, too.
The millennial customer is the majority of our customer base and we want to make sure to cover all of her needs. We learned she really likes to show her baby bump and desires more fashion forward options in her maternity wear. For us, this meant looking at our assortment and making adjustments to offer her both the fashion and the aesthetics she is looking for as well as offering innovation in our silhouettes and fabrications.
We also know that she doesn't want to create a new wardrobe entirely and if she's investing in items, she wants to be able to wear them after her pregnancy as much as she can. So we also really considered how to make items versatile enough so that she can wear them after pregnancy. A majority of the items we now offer work just as well at three-months as they do at seven to nine months and post baby.

What was your breakdown to breakthrough moment?

There was a moment a few years ago that made me realize the type of leader I wanted to be.
My son's graduation from his day care was the same day as a huge presentation I was making at work--people were flying in from all over the country for it. I assumed both events would be during the day and I cried in the car the entire way to work, agonizing over what to do. Thankfully, a few days later, I found out the graduation was actually at night and I was able to attend both events. However, I decided then and there that I would never want anyone on my team to feel forced to choose between being a good mom and doing well at work.
Creating an environment where everyone supports each other and eyebrows aren't raised if you have to step out of a meeting, whether you are a mom or not, is something I feel very passionately about. Whether someone wants to take a yoga class on a Tuesday afternoon or needs to miss a meeting for a child's graduation, I don't want her or him to ever feel like I think she or he is not committed.
Being honest and open about what our needs are helps us to all support each other and ultimately do a better job both at work and at home.

What kind of legacy would you like to leave behind?

Raising my sons to be happy, self-reliant and respectful to others is most important to me. Professionally, I want to be remembered in retail for making change. Change can mean a lot of things; for me it means pushing our brands forward from an aesthetic point of view, reworking operational processes to improve efficiency, and continually aspiring to better myself.
If I can inspire my team and others along the way to do the same then I will truly consider myself successful.

This answer might be very geeky but I have no choice but to borrow from one of my favorite series, The Lord of the Rings!
2015 would be The Fellowship of the Ring; working on the re-launch of A Pea in the Pod with my team felt like a long journey. However, we couldn't have made such progress without working together. Also, it's a book that is really just the start of what is to come-- we still have so many exciting things in the works for the brand!
2016 would be referred to as The Two Towers. In January, I was tasked with overseeing Motherhood Maternity as well and once again, it has been a task reliant on team work, where everyone plays their own part of equally great importance. I feel extremely fortunate to now be entrusted with taking two great brands to the next level; it is a great responsibility and the opportunity of a lifetime.