An unexpected thing happened last night: One of the biggest oil companies in the world -- Shell -- made a big decision acknowledging that the oil industry cannot operate safely in the Arctic. A decision that means one year of relief for the people and wildlife of the Arctic.

Shell, a company with one of the worst human rights and environmental records in history, has cancelled its plans to drill this summer in the Alaskan Arctic. A fitting end to a year-long tragicomedy of errors. A year that began with boasting and bravado and ended in a series of accidents and outright safety violations that proved Shell is far from Arctic ready. The bottom line is that no one is or will ever be ready, given the risks involved.

President Obama suspected that last month when he ordered a federal inquiry into Shell's Arctic drilling program. The U.S. Coast Guard confirmed our fears just last week, listing 16 safety violations on Shell's rig that ran aground in at the end of last year in Alaska. The onus is now on President Obama to make Shell's temporary stay of Arctic drilling permanent.

Millions of us have been have been crying out for Shell to back off and leave the Arctic alone. Millions have been calling for a global sanctuary in the uninhabited area around the North Pole. Because we know that despite the big promises of being the best in the business, Shell was in fact putting the Arctic at risk every day it operated there.

Faced with a likely embarrassing outcome from the U.S. Department of the Interior's inquiry, coupled with the realization that its broken chartered rigs could not be repaired in time to drill this year, Shell's management did the only thing they could: pull the plug before it was pulled for them. 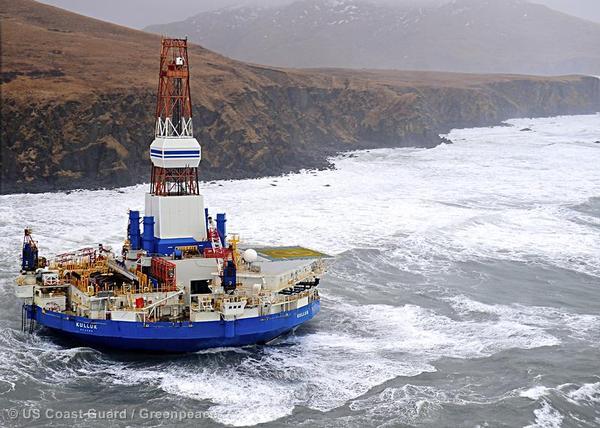 So what does this mean for the Arctic? It means one more year that Indigenous communities can fish and hunt and live off the land without fear of imminent disaster. One more year for narwhals to swim free in unspoilt seas. For polar bears and their cubs to roam freely.

It also means one more year for our growing movement to come together, to grow stronger, and turn Shell's hiatus into a permanent Arctic Drilling ban.

We have another year to increase pressure for a global agreement, a ban on all drilling and industrial fishing, for the kind of protection that lasts forever, not just one year, and applies to all companies, not just one.

Shell is not alone in eying the Arctic.

Statoil is eying up the whole Arctic, from Alaska to Greenland and Norway. It has tripled R&D spending and plans to drill further north than anyone else. Russia's Gazprom wants to produce the first-ever oil from the offshore Arctic, but its decrepit rig and useless spill plan show how just reckless its Arctic ambitions are. Rosneft is opening up vast areas of the remote Kara Sea as part of a $500 billion Arctic oil push with ExxonMobil. Drilling could start next year. ConocoPhillips has just submitted plans to the U.S. government to drill in the Chukchi Sea off Alaska in 2014. And Canadian energy giant Husky has its paws all over Baffin Bay in Greenland, where drilling could even start later this year.

In May 2012, Greenpeace published "Out in the Cold" which analyzed the financial risks faced by Shell -- and therefore by their investors -- in attempting to drill in the Arctic. The risks are almost too many to count, from questions about the commercial viability of some proposed Arctic projects, to the inadequate spill response plans that prove that no company -- not Shell or any other with Arctic ambitions -- has ever proven that they could clean-up a spill in treacherous Arctic waters.

Shell's disastrous summer in the Chukchi sea has proved every one of those risks as real and present threats to investors in Shell -- with $5 billion already spent and wasted, and substantial further costs to be incurred over 2013, and no returns in sight.

The fight is not over, and we mustn't stop here. Next month, a group of Arctic Indigenous representatives, celebrities, Greenpeace activists and guides will embark on a mission through the splendor of the pristine Arctic, on behalf of nearly three million Arctic defenders, to plant a flag on the seabed at the North Pole; a flag for the future designed by the youth of the world that says this place belongs to all of us, not to one country or corporation.

So breathe a sigh of relief for the Arctic, enjoy a moment to reflect, even have a laugh at Shell if you like. But then lace up your boots and join us on the front lines. We'll be there, demanding climate justice, rallying for peace, and promoting change.