Last Sunday, after I posted my most recent blog, "Climate Educators Wanted," I visited the Green page in HuffPost. My eyes lit up. Before my eyes, the GREENscape slowly turned into a story. Stories are nothing but fragments from life put together. Here's how this story came together.

About midway down the left column, my earlier post, "Letter to Young Americans" was still visible. Right above it was a Shell oil ad. The ad and the story each occupied an equal amount of space, so that was a good beginning. Here is a quick read: the ad says, "Let's Go," asking all of us to join in. The story asks all young people to join in. The ad says, "Go Further," telling us to progress into the future. The story says, "Start the climate revolution now," for the purpose of a brighter future. The ad and the story outwardly appear to be saying the same thing and peacefully cohabiting in the HuffPo GREENscape. 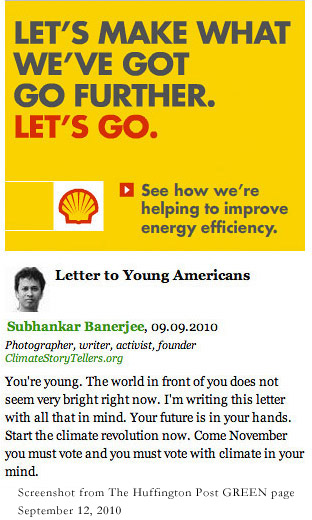 Allow me to use my wild storyteller imagination to go a little deeper. The ad says, "Let's Make What We've Got." Let's split this in two parts. I'd say, because Shell likes to "take" more than they "make," we can replace one with the other. And "What We've Got"? Oil is what we've got. So to get at the essence of the story, the line should read, "Let's Take the Oil We've Got." My story, on the other hand, talks about getting off of fossil fuels -- oil and coal -- and starting a clean energy revolution. So you see, in spite of the superficial similarities, the ad and the story are actually heading down two different roads. As poet Robert Frost wrote,

It's time that we also take the road less traveled -- the one with a clean energy future.

About the oil that we've got. Resource expert Michael Klare keeps pointing out that there is no easy oil anymore, only extreme energy in faraway places like the Arctic or in deep oceans. And it comes to us with great devastation.

That's why Shell wants to "Go Further," literally--in distance, not in time. Actually Shell wants to go quite far, all the way to the Beaufort and Chukchi Seas of Arctic Alaska to get the oil that is there. And they want you to support them in their journey, which is why they say, "Let's Go."

As it happens, Shell was ready to start drilling this past July in America's Arctic Seas. But BP's deadly oil-and-methane spill in the Gulf of Mexico put a kibosh on that plan. On May 25, I wrote a piece titled, "BPing the Arctic? Will the Obama Administration Allow Shell Oil to Do to the Arctic What BP did to the Gulf?" which was first posted in TomDispatch.com and then in numerous progressive outlets around the world, including HuffPost, and was also translated in other languages. I'll not repeat what I said there; I hope you'll take a look, but here is the last line:

"It's time to put a stop to Shell's drilling plan in America's Arctic Ocean for this summer -- and all the summers to come."

On May 27, President Obama suspended Shell's Arctic drilling plan for 2010. So I thought that this particular story had ended for the year and we'll reopen it again next year. But like all good stories, it became more like a large onion with many layers to peel. 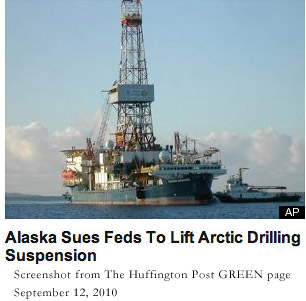 Back to the HuffPo GREENscape. I saw that, two columns to the right and about an inch down, there was a news story with title, Alaska Sues Feds to Lift Arctic Drilling Suspension. Here is how that story came to life. Interior Secretary Ken Salazar visited Arctic Alaska at the beginning of this month. His itinerary included a town hall meeting in Barrow (the northernmost Inupiat community in Alaska), a stop at the National Petroleum Reserve-Alaska, and a flight over the Beaufort and Chukchi Seas. Then on Sept. 4, there appeared a story in the Los Angeles Times with a headline that read, "Salazar: Arctic oil drilling must wait." In that piece you'll see my polar bear photo with the Beaufort Sea in the background, one of the two Arctic seas that Shell wants to drill for oil. But of course the story couldn't end there, either.

There is a lot of money at stake for Shell. They have already spent more than $2 billion in lease sale and probably several hundred million already in other operations and PR in the Arctic communities and outside. Did Shell arm-twist the Alaska state government? From my decade-long experience working on Arctic Alaska issues, all I can say is -- most likely. So there you have it. The State of Alaska is so willing to allow Shell to go drill in the Beaufort and Chukchi Seas that it sues the Feds to lift the Arctic offshore drilling ban.

Back to the ad: Shell wants to "Go Further." As it happens, Shell has actually gone very far. Perhaps not as far as Star Trek's famous where no man has gone before, but quite close -- all the way to Sakhalin Island, on the Sea of Okhotsk in Far Eastern Siberia, to drill for oil.

I've also been to Far Eastern Siberia, to the Yakutia province, the largest sub-national entity in the world. But I've never been to Sakhalin in person. However, I've been there through stories told by none other than the master storyteller Anton Chekov. In 1890, Chekov made a seven-months-long journey to the Tsarist penal colony on Sakhalin Island. Chekov's journey was so amazing that he regularly wrote home about it. His book, Sakhalin Island, is now considered a masterpiece of world literature.

Shell's journey to Sakhalin, on the other hand, is something no one would want to write home about. As a storyteller I believe in retelling stories again and again, because stories keep a culture alive. So here are some fragments from stories told by others about Shell's journey to the Sakhalin.

"The oil pipeline will cross over 1,000 wild rivers and tributaries, many of them important to salmon spawning. In addition, despite public protests, a million tons of dredging waste has already been dumped into Aniva Bay - an area crucial to the livelihood of the island's indigenous community - and has led to the destruction of the local fishery. To make matters worse, an oil platform is being built at the very spot off Sakhalin where the last 100 critically endangered Western Pacific gray whales feed. By Shell's own estimates, there is a 24 percent chance that there will be a major oil spill during the life of the 40-year project."
Claude Martin, The New York Times, December 2, 2005.

Things actually got really bad for Shell in Sakhalin. When Shell bought the Sakhalin leases in 1996, the price of oil was $22 a barrel and so little attention was paid. But five or six years ago, as the price of oil went through the roof, everyone began paying attention, including Mr. Vladimir Putin. Moscow sided with the Sakhalin Island environmentalists, and there was even a threat of a $50 billion lawsuit against Shell. In 2007, Shell was forced to give up half of its control of the Sakhalin operation to the Russian energy giant Gazprom. This story was reported in CNNMoney.com. One thing that stood out for me in that story was a comment by a Sakhalin local: "The company did everything that was good for them and not good for us."

As I was wrapping up this story, the following news came in, in a story called Melting sea ice forces walruses ashore in Alaska:

Tens of thousands of walruses have come ashore in northwest Alaska because the sea ice they normally rest on has melted. Scientists with two federal agencies are most concerned about the one-ton female walruses stampeding and crushing each other and their smaller calves near Point Lay, Alaska, on the Chukchi Sea. The federal government is in a year-long process to determine if walruses should be put on the endangered species list.
-- Seth Borenstein, Associated Press, September 13, 2010.

The news hit me like a rock. I have spent much time in Point Lay, an Inupiat community, and have walked some of the barrier islands where these walruses are probably jammed together right now. These animals are already seriously stressed by climate change, and now Shell wants to go drill for oil in the Chukchi Sea.

None of this bodes well for Shell's drilling plan in the Beaufort and Chukchi Seas of Arctic Alaska.

It's time Shell gave up on their hope to drill in America's Arctic Ocean and started spending their money to build a clean energy economy and create real jobs right here in America. Then we'll surely write home about "Shell's Journey to the Clean Energy Future," and we'll take Shell's "Let's Go" to heart. This will surely "Go Further" into a cleaner future for all life. Who knows? Like Chekov's book, such a story could eventually become a masterpiece as well.

But until then, we must stop Shell's plan to drill in the Beaufort and Chukchi Seas of America's Arctic, no matter how many "Let's Go" ads they place in the HuffPo GREENscape.