In cooperation with our longstanding partner Crowdrise, The Huffington Post is celebrating its 10 year anniversary by focusing on the promise of the next 10 years. We're highlighting causes that are near and dear to our ethos -- causes where we believe meaningful progress can be made in the coming decade -- and empowering readers to act and take part. Join us!

Lisa LaFontaine, CEO of the Washington Humane Society, is so optimistic about the future of animal shelters that she’s already bracing for the day when there aren't enough rescue cats and dogs for everyone who wants them.

"Where are we going to get pets?" she says.

It’s an enviable problem to have, and one that, realistically, won’t be on her radar for a while. According to the ASPCA, about 2.7 million shelter pets are adopted each year -- and about the same number are euthanized.

But the people working to get more animals adopted rather than euthanized say that momentum for a more animal-friendly future is building. 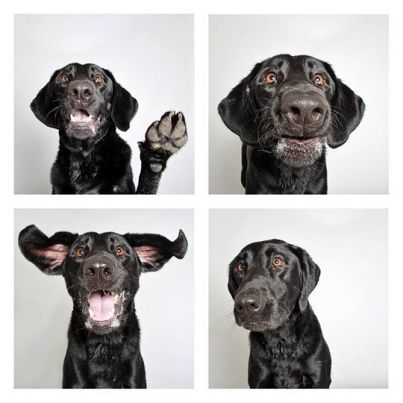 Photographer Guinnevere Shuster, who works her magic at The Humane Society of Utah, tells The Huffington Post that a picture like this one "encourages people to visit a shelter or rescue to get their next dog. These pets want to be a part of a family, so why not show how their personalities could fit into one?"

"Not too many years ago, when people thought of an animal shelter, they thought of a pound, which brought to mind tragic images of abused and neglected animals gathered in a dark, unclean environment," says Tawny Hammond, director of the Fairfax County Animal Shelter in northern Virginia.

Hammond thinks that image is changing. A 2014 PetSmart Charities poll shows a substantial increase in the percentage of people who say they'd adopt a shelter pet -- 66 percent last year, up from 58 percent in 2011 -- suggesting she's right.

Hammond's shelter has more than than doubled its adoption rate between 2010 and 2014, with the help of methods that illustrate how organizations can transcend their institutional image.

The shelter added some whimsical features to show off its animals' best faces, like cheerful Facebook photos for dogs, cats and pigs. Community involvement is another significant factor: Fairfax hosts birthday parties and summer camps for kids.

Then there are the efforts to help keep animals happy, like doggie playgroups, which help them let off some steam and take a break from the shelter environment.

Beyond such efforts, LaFontaine points to loosening restrictions on animal adoption as an important factor in the shelter-pet boom. For instance, a growing number of shelters now bring adoptable pets to events like street fairs and festivals.

"We need to go where the people are," she says.

We're on our way to The Big Bad Woof in Hyattsville with a bunch of wiggle-butts and fluffy felines so ready to find...

Other efforts, like low-cost veterinary clinics, pet food banks and programs to spay/neuter and vaccinate feral cats, are aimed at keeping animals out of shelters in the first place.

And, importantly, many shelters are working hard to make good matches between pets and families.

Finnegan Dowling of the Humane Society Silicon Valley told the story of Layla, a cranky adult black cat whose owners gave her up after they had kids. Layla had a history of biting and didn’t like children, traits that in the past may have made her an unlikely adoptee.

But the Humane Society managed to match her up with an older single woman who was comfortable with the cat’s limits.

"We’ve seen a real revolution in animal sheltering over the past decade, so increasingly people associate their local animal shelter with hope, triumph and second chances," Hammond says. "And that’s made a huge difference."

There are still many challenges ahead for shelters.

For example, though these laws are on the wane, hundreds of U.S. jurisdictions still maintain "breed-specific legislation," which restricts dog ownership to certain breeds. Experts say these laws contribute to pet homelessness and euthanasia without increasing public safety. Some shelters, too, discriminate against dogs by breed, though these policies are also in decline. Even Fairfax loosened its restrictions on pit bull adoptions only recently.

The dearth of pet-friendly rental housing -- especially without breed restrictions -- is another ongoing problem.

Better coordination in the rescue and transport community would help, says Teresa Johnson, CEO of the Kansas City Pet Project. Sometimes called "the underdog railroad," the network is made up largely of volunteers who drive and fly homeless pets from places where they'll likely be killed to areas where they have a better shot of finding a home.

Americans vastly underestimate the number of pets euthanized in shelters each year, PetSmart Charities' 2014 report found. It’s true that the number has plummeted -- from between 12 and 20 million per year in the 1970s to 3.7 million in 2008. But lowering it even further requires connecting with people outside the shelter world, says Francis Battista, a founder of the Utah-based sanctuary and advocacy group Best Friends Animal Society.

"All that we need to get there is greater public awareness of the issues, and for policy makers to listen to public sentiment, which overwhelmingly favors bringing an end to shelter killing," he says.

"When I take walks and I see dogs, I ask every single person, 'Where did you get your dog?,' after I cover them in kisses and tell them how beautiful they are," she says.

"And what I'm seeing more and more of is people say, 'She's a rescue.' And they say it with pride."