SHENZHEN, China -- Chinese technology is chock-full of awkward analogies and misfit metaphors. The social network formerly known as "the Facebook of China" (Renren) turned out to be a flop, "the Twitter of China" (Weibo) is slowly sliding toward irrelevance, and e-commerce behemoth Alibaba has burst out of several rhetorical straitjackets.

But recently, international tech circles have been buzzing about a new analogy, one that doesn't pigeonhole its subject as "the [insert U.S. tech giant] of China" but instead embeds it firmly in global innovation networks. They're talking about the city of Shenzhen, and they're calling it the Silicon Valley of hardware.

After two decades of astronomic growth in the digital world, some entrepreneurs and engineers are turning back to the world of real stuff -- wearable tech, robots, smart health devices -- and many of them are beating a path to Shenzhen, the mainland Chinese metropolis that borders Hong Kong.

Long viewed as the go-to region for massive and mindless production needs, the city has the manufacturing prowess, engineering talent and lightning-fast logistics that make it fertile ground for hardware startups to go from prototype to product. Shenzhen's legendary electronics markets and online retailers offer a feast of components on demand, allowing for the rapid tinkering and iterating that fuels innovation. Builders here say a week of work in Shenzhen is equal to a month in the U.S. 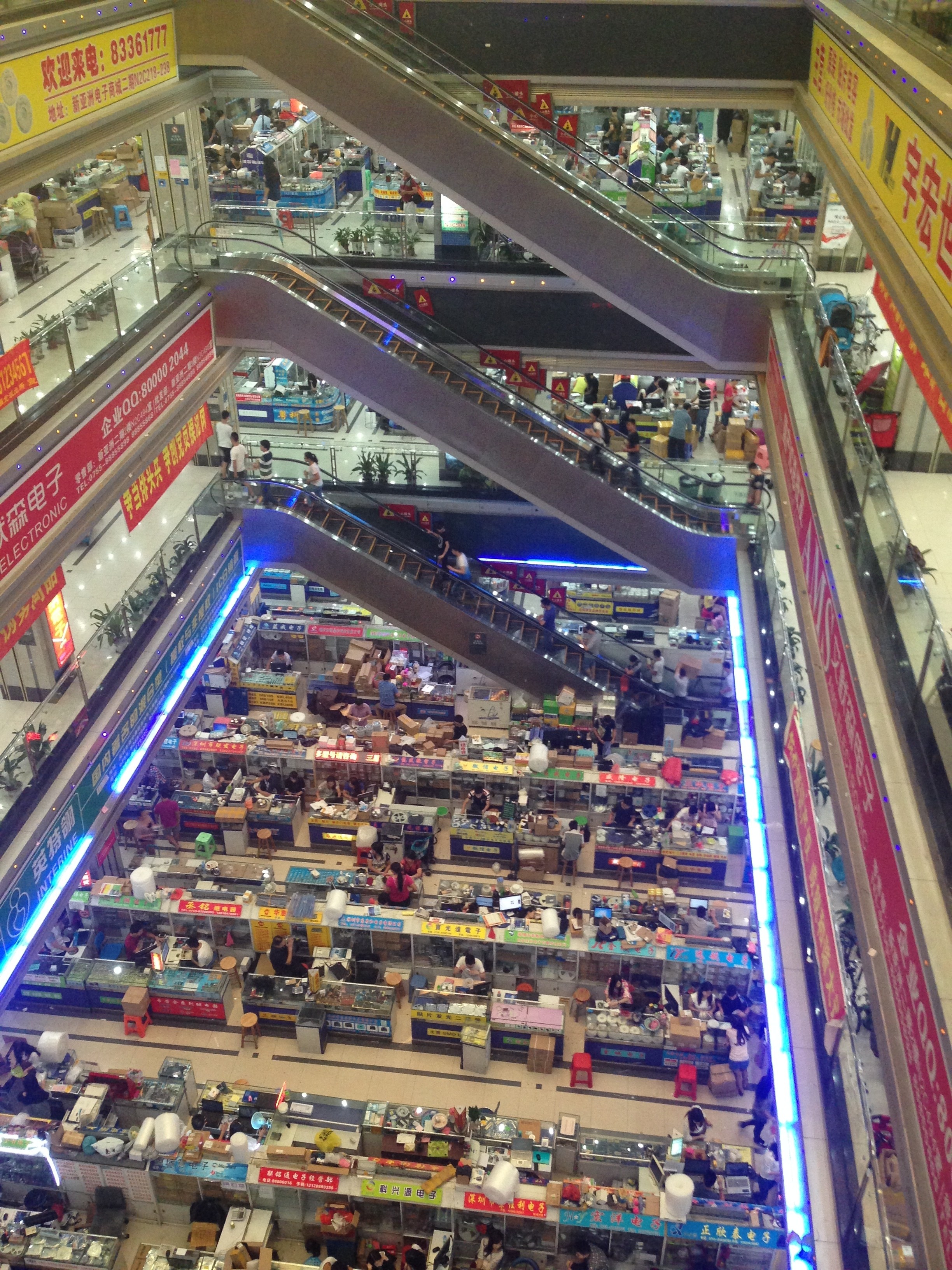 Engineers from around the world salivate over the selection of components at Shenzhen's Huaqiangbei electronics market. (Photo: Matt Sheehan/The WorldPost)

"If you're an engineer with an idea and you're waiting five days or two weeks to test it, that's no way of being creative," said Will Canine, co-founder of OpenTrons, a company building an open-source liquid-handling robot in Shenzhen. "When you're creative you want to try an idea and move on to the next idea and then the next idea. That's the kind of dynamic flow that's possible in hardware in Shenzhen that's not possible in the United States."

Canine and his two co-founders of OpenTrons are emerging from Haxlr8r (Hack + accelerator), a hardware accelerator that brings engineers and entrepreneurs from around the globe to Shenzhen for a crash course in prototyping and manufacturing. Haxlr8r helped OpenTrons put together its first product, the OT.One, an open-source pipetting robot that the founders hope will dramatically reduce the hours that biotech researchers and enthusiasts spend moving liquids around by hand. The OpenTrons team met on America's East Coast, but putting together a ready-for-market robot on a tight schedule and low budget required a stint in southern China.

With hardware funding and startup activity on the rise, Shenzhen now plays host to several groups that seek to connect both international and Chinese hardware startups to the bounty of resources in the city.

Despite the city's unique position in the industry, the Silicon Valley comparison remains mostly aspirational. The San Francisco Bay Area has spent decades developing a complex and near-complete software innovation ecosystem. Established tech giants, free-spending venture capital firms and world-class universities have consistently turned dorm room dreams into world-changing innovation. Shenzhen's hardware scene has almost none of those ingredients, and it's decades away from matching the valley's track record of success. What it does offer is all of the raw materials for tinkering and building, a factory-market-workshop nexus that engineers describe as "a paradise for makers" and that began decades ago. 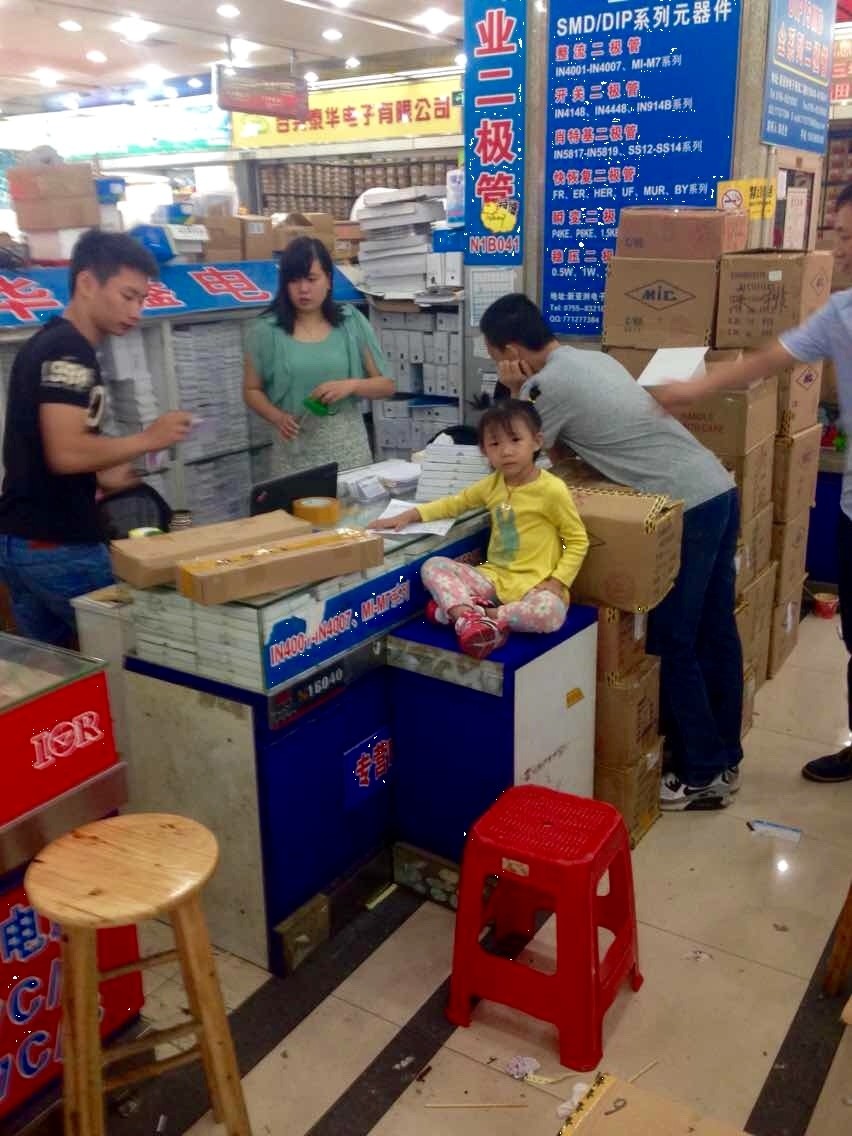 A young girl sits at the counter of a stall in Huaqiangbei electronics market. (Photo: Matt Sheehan/The WorldPost)

At the dawn of China's economic reforms in the late 1970s, Shenzhen was central to earning China the dubious distinction of "the world's factory." In 1979 the sleepy fishing village of Shenzhen was named China's first Special Economic Zone, triggering a flood of investment into the region and a tidal wave of cheap exports rolling out of its newly constructed factories. Since then, Shenzhen has grown into one of China's largest and wealthiest metropolises, one built on a foundation of free enterprise.

But today's hardware startups say it's not low-cost and low-skill labor that draws them to Shenzhen -- wages in Chinese factories are rising and by some estimations are now 20 percent higher than those in Mexico. Instead, Shenzhen and the entire Pearl River Delta region offer a manufacturing ecosystem unmatched anywhere else in the world, with clusters of symbiotic factories turning the area into a one-stop shop for many projects. 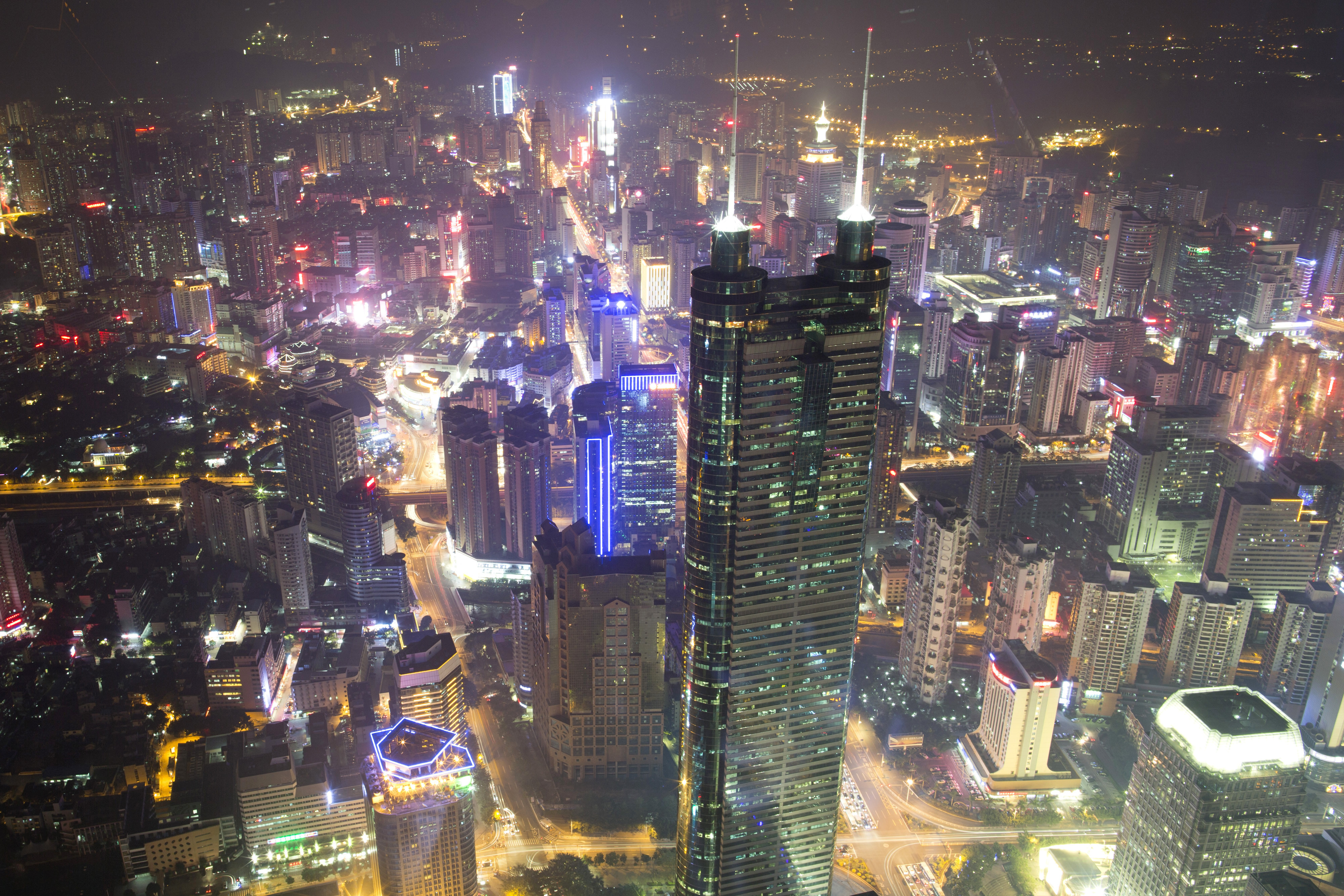 China's economic reforms have transformed Shenzhen from a fishing village to a wealthy metropolis and a magnet for hardware innovators. (Photo: Brent Lewin/Bloomberg via Getty Images)

That manufacturing process is also overseen by deeply experienced industrial engineers, ones who still come at a bargain rate compared with their U.S. counterparts.

"You have engineers in factories here, and when you show them a product or prototype they can already see how many molds you need, how much it's going to cost, which parts are going to be a problem, and how you should modify it," said Benjamin Joffe, a general partner and mentor for Haxlr8r. "They see those things because they have so much know-how and practice with the tools."

That know-how is invaluable when moving from garage-built prototype to factory-built product. Designers expecting factories to simply crank out perfect renditions of their blueprints soon discover that industrial engineers can be just as crucial in the creation of a finished product.

"There's this predominant idea in the West that things are created somewhere in a glossy, fancy design studio in Silicon Valley, and then the designs are shipped over and it's just executed in China," said Silvia Lindtner, a professor at the University of Michigan who researches the intersection of manufacturing and maker culture in China. "A lot of redesigning and collaborative design processes happen with the manufacturer, happen on the factory floor." 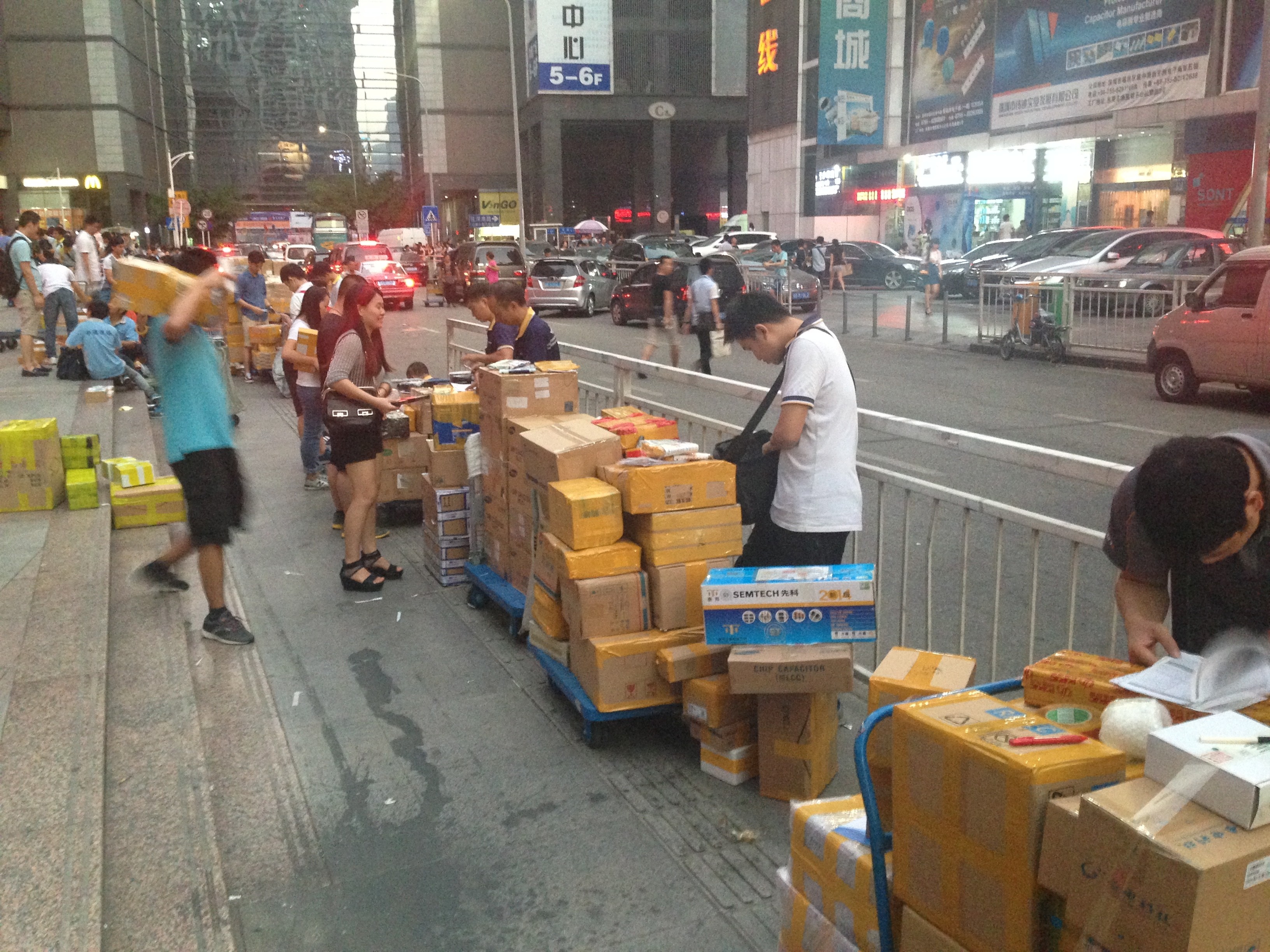 Lindtner says these exchanges are critical enough to warrant a new label: changing "Made in China" to "Made with China."

Shenzhen's industrial engineers honed their craft churning out everything from handbags to iPhones, but with rising wages now pushing mass production toward China's cheaper interior some small hardware startups see an opening.

"Previously every factory was so busy with big orders from huge companies," said Eric Pan, the founder of Seeed Studio, a hardware innovation platform that partners with Haxlr8r and connects builders around the globe to Shenzhen's resources. "But as those companies are moving out, the manufacturing is becoming more flexible, more agile, more responsive, which is very good for generating new products."

Pan's business caters to members of the maker movement, people around the globe who are putting digital fabrication tools such as laser cutters and 3-D printers to use creating quirky devices and new commercial products. Local entrepreneurs, designers and even politicians are hoping that a growing maker scene in Shenzhen can help support the city's manufacturing base as low-margin industries move elsewhere.

"There's a lot of effort being put into asking, 'What can we do to not have the same destiny as a region like the Midwest? What can we do that elevates us into a creative innovation capital?'" said Lindtner. 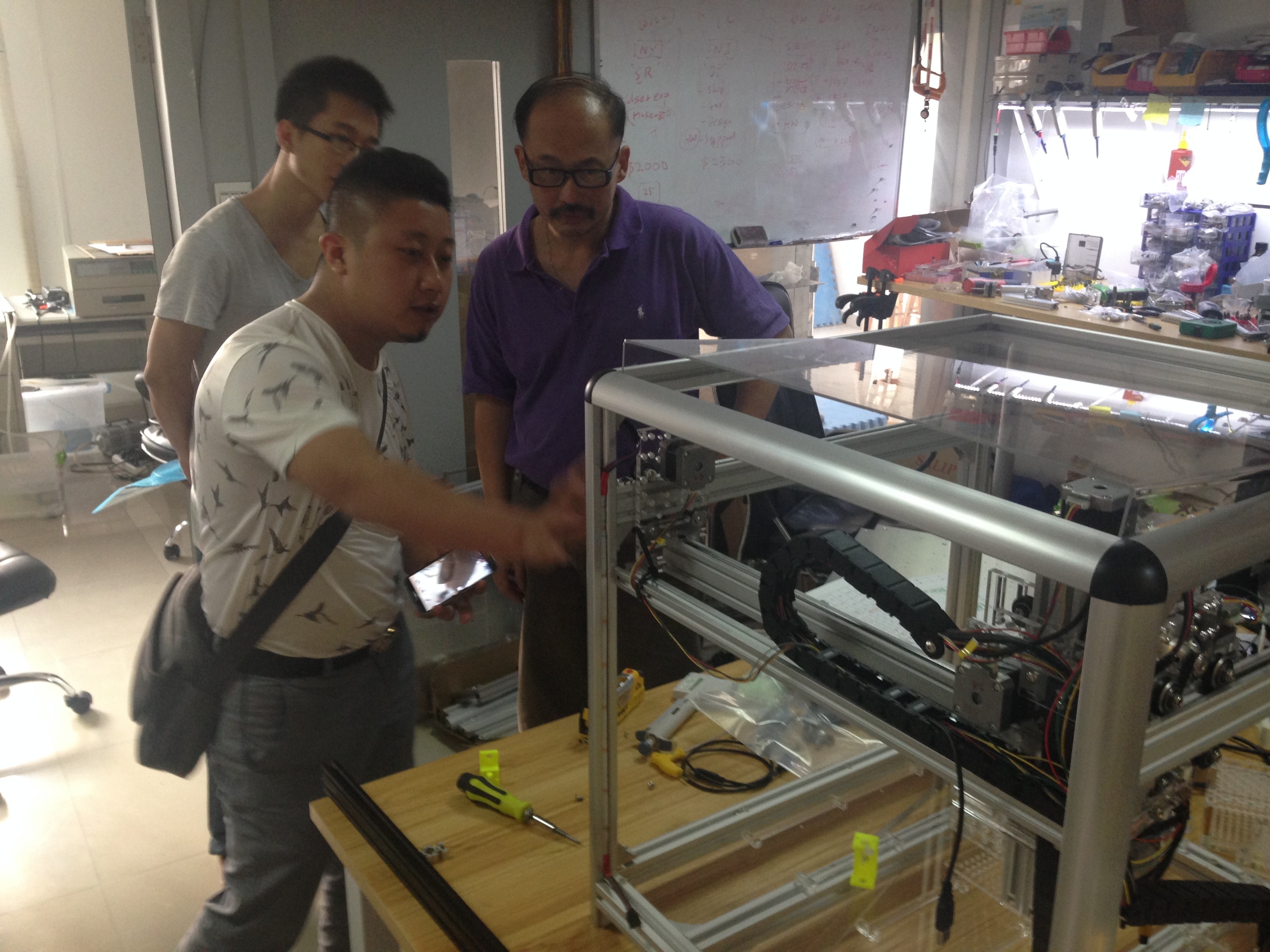 Chiu Chau of OpenTrons talks specs with a factory owner who dropped by Haxlr8r to pitch his services. Factory owners compete fiercely for business by catering to customer demands. (Photo: Matt Sheehan/The WorldPost)

Government funding is supporting "makerspaces" -- public workshops equipped with the tools needed for creative projects -- but it's crowdfunding websites such as Kickstarter that finance many hardware startups' pilgrimages to Shenzhen.

Software startups can glide by, incurring few costs beyond servers and instant noodles, but producing a piece of commercial hardware requires large upfront expenditures. Backers of hardware projects on Kickstarter are essentially pre-ordering products, letting entrepreneurs know if their idea has a customer base and then funding the first batch of goods.

But that surge has also included a large proportion of first-time hardware entrepreneurs who were blindsided by the complexities of large-scale manufacturing. Gleaming prototypes can turn out to be incredibly difficult to manufacture at scale, and a successful crowdfunding campaign is just the beginning of building a lasting business.

Rui Ma, a partner at angel investing firm 500 Startups, also warns of the seductiveness of a successful Kickstarter campaign.

"Kickstarter is not validation of product market fit," said Rui. "It mainly means you've produced a shiny video that captured the imagination of some people, and any funds raised is a liability, a promise to deliver that you now owe to your customers." 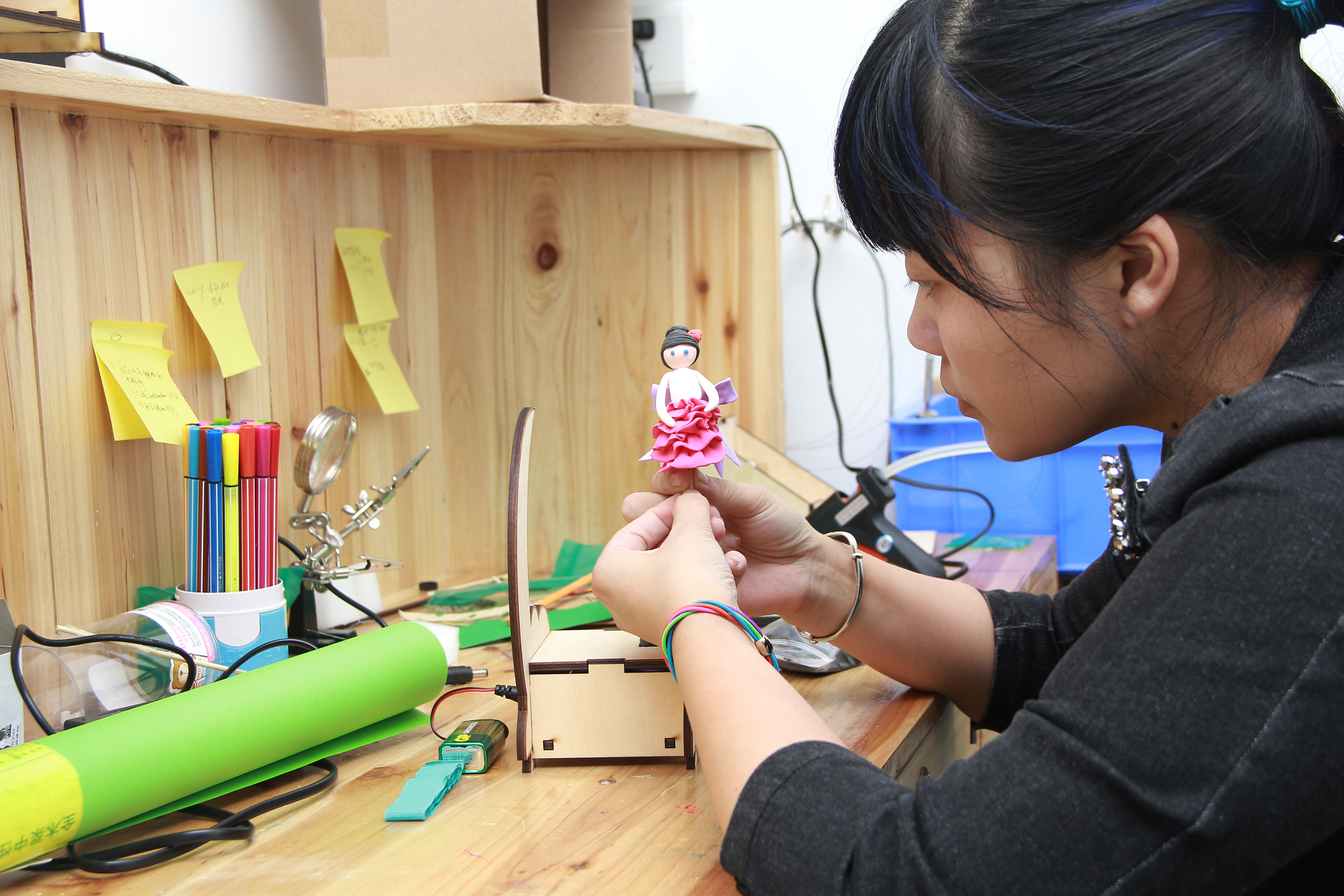 Makers tinker with creations, both casual and commercial, at Seeed Studio's space in Shenzhen. (Photo courtesy of Seeed Studio)

Even if a Shenzhen-built prototype does strike a chord with global markets, startups making the leap into mass production often must look beyond the city. Jeff Hsu, a Taiwan-based engineer and supply chain specialist, points out that as supply chains grow too complex for lone-wolf entrepreneurs to manage, hardware companies turn to specialized Taiwanese firms like Foxconn, many of whom are moving production inland. Breakout web startups can run a global empire from one Silicon Valley office, but the physical realities of mass-producing hardware mean that no single city or region will completely monopolize production or innovation.

Challenges for the hardware innovators and the city of Shenzhen remain immense, and if measured in pure cash, Shenzhen is still several dozen billion-dollar ideas behind Silicon Valley. That’s an enormous gap and one that won’t be closing anytime soon. But for engineers who are watching Shenzhen shed its reputation as a haven for low-cost copycats, the excitement is palpable.

"The city is going from an engineering site to a combination of engineering and culture that generates technology and innovation," said Pan of Seeed Studio. "The chemistry of the city is changing."