Time Magazine released its annual 'Person of the Year' issue, with 'The Protestor' earning the coveted title as well as the magazine cover.

The glory of the win is shared amongst protestors worldwide, including those involved in the Arab Spring, Russian election rallies and, of course, Occupy Wall Street. Activist street artist Shepard Fairey, of Obama's HOPE poster fame, designed the cover image. HuffPost Arts asked Fairey some questions about the challenge of creating the emblem. 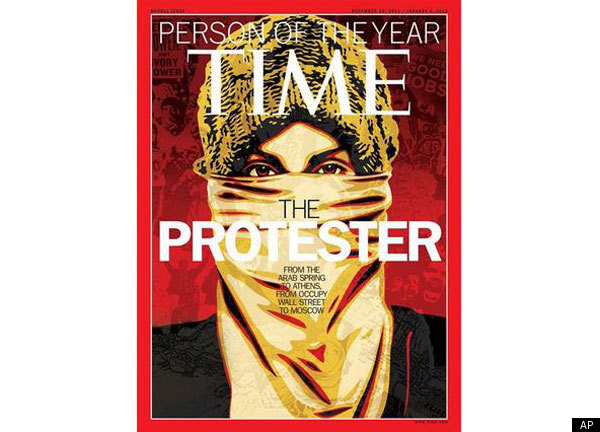 The cover depicts an anonymous protestor, serious yet sympathetic. Simultaneously representing a selection of minorities and a sweeping generality. At first glance it is easy to make assumptions about the protestor's gender, race and age, but a second look makes any sure judgment difficult. The protestor is rendered in Fairey's signature style, striking propaganda inspired minimalism with a stencil-esque youthfulness. Behind the figure is a collage of rally scenes from the Time Magazine archives, consisting of signs like "We Need Good Jobs" and "People Power, Not Ivory Tower."

What aesthetic and historical influences did you incorporate into the TIME cover image?

Time provided me with reference images to sift through and I illustrated from a photograph that I thought would be a good reference for an iconic and compelling protester who would come across as serious, but not scary. Most of the protesters are normal, idealistic, young adults, so I thought the "person next door" feel was important. I'm influenced by propaganda poster art and I try to emphasize the most powerful essence of an image and eliminate anything superfluous. My color palette has a propaganda influence as well. I like Warhol as well.


As evident in the wide-ranging variety of images and language associated with OWS alone, it is basically impossible to sum up the movement in a single image. Shepard Fairey's attempt, a revamped version of his HOPE poster, received a fair share of criticism. Fairey included reaching out to President Obama, going against the movement's Statement of Autonomy. Portraying not only the entire OWS movement at once, but also the other protestors across the globe is an unimaginable challenge.

Your HOPE poster for Occupy Wall Street was critiqued by some protestors for not accurately expressing the spirit of the movement. How did you, this time, create an image to express the spirit of so many protests simultaneously?


I try to convey my ideas in my work, but obviously not everyone is going to agree with what I think. Everyone has an opinion, but few people have the courage to create rather than just comment. A lot of people agreed with my Occupy HOPE image and it created a valuable dialogue. With the Time cover I wanted to capture the spirit of defiance that any protester must possess in the face of arrest or worse. To convey that the cover was about worldwide protests I created a collage of protests from around the globe that is used tonally in the background. I'm a supporter of Occupy, but I thought it was important to recognize that protest was a global phenomenon this year. I think the collage helps to put across that cumulative effect.

The brilliance of Fairey's image is its simultaneous evocation of the particular and the general, the individual and the archetype. On the one hand the image is a collage, just as there is no one manifesto for OWS making just one visual representation impossible. And yet in the devoted eyes of Fairey's anonymous protestor the greatest of differences lose their significance. Fairey conveys the move of a crowd putting on Guy Fawkes masks, of millions of people becoming 'the 99%.'

The image has not been entirely well-received, with LA Times critic Christopher Knight calling it "wince-inducing," "corporate," and "conventional." Yet in an interview with Time, Fairey explained his view of the protestors as "A lot of them are just regular folks who feel dissatisfied." Perhaps that is the most revolutionary part of the ongoing protests, that the protestors aren't all that conventionally revolutionary.

Do you think it is possible to create a political image without it being controversial? If so, is that something you aim for?

I don't aim not to be controversial, but I'm also never antagonistic for no good reason. Bringing my point of view into focus through my art has frequently been controversial, but I don't think this Time cover should be controversial. I encourage people to stand up for their beliefs and protest if necessary, but this Time issue is a documentation of an irrefutable phenomenon, not an incitement to protest. I try to make images that will resonate broadly, even if they are controversial. Art is a great tool of populist communication.


Watch the world's reaction to the new 'Person of the Year' below.