What is the difference between graffiti and paparazzi? Both are annoying invasions of public space. Whenever a cry to regulate either of these behaviors is heard, civil society acknowledges that it would take too much erosion of personal liberty to stop one or both. Therefore we tolerate and occasionally celebrate these rogue exercises on the fringes of free speech. There is no difference other than choice of art materials: Paparazzi is the filmed version of Street Art.

So it was doubly delicious to see Shepard Fairey flunk his first ordeal with the paparazzi, this bane of celebrity. After a decade of having his corporate brand enter our public space in the guise of a rebellious act, TMZ flaunted the liberty of public space exactly like Shepard Fairey has with glued up OBEY signage. The tables were turned and now instead of us, the public, forced to endure Fairey's flaunting of the social contract with unwanted street art, it was the street art legend forced to endure scrutiny in a public space for our entertainment.

Watch TMZ's VIDEO OF SHEP'S public meltdown when he has to respond to provocations in public space that he is not controlling.

And how entertaining that was... All the veneer of the silent cool established by a sleeping city waking up to see new street art ad campaigns forced upon their shared space. Trapped in the public space of an airport lobby, he revealed just how rehearsed he must have been in "Exit Through the Gift Shop" and "OUTSIDE IN: The Story of Art in the Streets". It was at the Q&A portion of the premiere of that Alex Stapleton documentary produced on-site at MOCA at the Levi's Film Workshop that Shep shined among the monosyllabic Sabers and Gaskins of the world.

He smiled in front of the theater crowd that night as he used the word "semiotic" with a certainty nobody in the theater knew what it meant. He had rehearsed his retorts, comparing graffiti to weeds - you are never going to get rid of weeds so work on efficient mitigation where the weeds are at their worst. Apply this to tagging and offensive graffiti was his message. But out "on the streets" he was unrehearsed for the thorns and thistles that comprise TMZ, a tagging crew that paints humiliation onto a million television screens, simultaneously reflecting our indulgences and lamentations of living in a free society.

Shep at his anti-improvisational worst is as revelatory as it is entertaining. When provoked by TMZ, does he not lash out at his wife in much the same way that an uncool old codger lashes out at the sight of graffiti? His once private and pristine marriage is now challenged by edgy activity in public space and he is enraged and hostile ... for the entertainment of a million television viewers, just like rabid "average Joes" enraged at their city being "bombed" for the entertainment for some kids. The Shepard Fairey image transformation: from cool innovator to conventional grumpy old man in a 76-second video clip.

To watch him viciously give his wife a "Shut the fuck up" look as she politely explained that he no longer does his own wheatpasting - the same grouchy attitude apparent in the voice of your dad seeing an OBEY poster and some tagging and muttering "What the hell is this city coming to!?" 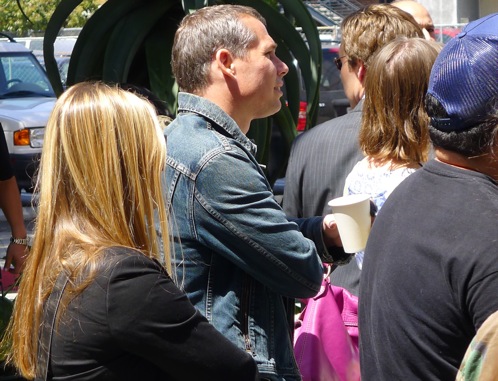 Sheppard Fairey may not want cash-hungry municipalities to build a case against what he has done when out in public.

When she tells TMZ that he used to put his own posters up "long time ago," it was doubly treacherous... is his credibility on the line with his fanbase? If he is not risking it all for his art, are his corporate logo mockeries just then corporate logos? Or did TMZ let a bigger Genie out of the bottle? Is Shepard Fairey angry at his wife for admitting that he did these wheatpastings at all at any time? Back in the "big hair 80s," Heavy Metal bands and the nightclubs they played at would get sent a bill for plastering phone polls with posters for their upcoming gigs by city governments sending out their cleanup crew.

If cash-starved local governments look up their own old laws still on the books and, having seen Fairey's own wife confirming on the record that the family fortune was based on advertising in these civic-controlled public spaces, will cities and counties all across America unite to collect fees from the Obey Empire with her admission as a pretext to write up an invoice? Imagining this were your empire, would you tell her to shut the fuck up? 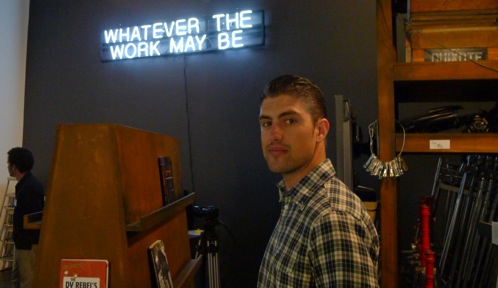 At MOCA's Geffen Contemporary, Joshua Katz built the Levi's Film Workshop to coincide with MOCA's Art In The Streets survey. Apparently, artists in the show were not coached on how movie stars deal with paparazzi while they and the general public were allowed access to filmmaking equipment.