Some relationships get off to a bad start. Instead of meeting cute, two people may instantly detest each other. Instead of appealing to their better selves, they may become greedy, vindictive, and hurtful. And that's just for starters.

In a formulaic romantic comedy, the path ahead is clear. Slowly but surely, two people are forced to acknowledge each other's strengths, rely on one another for help, and begrudgingly develop a liking for each other. But not every rom-com is formulaic. Nor does the final coupling end up being what the audience expects.

If I were stuck on a long flight and had to watch a movie chosen by airline management, I can't think of a more soothing and nicer way to pass the time than watching Sean Lackey's comedy, The Yank (which was screened at the 2015 San Francisco Indie Film Festival). By no means is The Yank a major studio film cast with Hollywood stars that is destined to sweep an awards ceremony.

And that's just fine with me.

Instead, Lackey's movie is a smartly written, low-budget romantic comedy whose basic goofiness, honesty, and intelligence can't help but win over viewers who just want to have a good time. And let's be honest -- any movie that includes Fred Willard as the bumbling hero's father (a well-meaning Irish-American ignoramus) can't be all bad.

Written, directed by, and starring Sean Lackey, The Yank follows the misadventures of Tom Murphy, a middle-aged sad sack from Cleveland whose girlfriend, Colleen (Nicole Forester), dumps him on their one-year anniversary and leaves him sitting, confused and crestfallen, on a famous drum set located at the entrance to The Rock and Roll Hall of Fame and Museum. Tom is quickly spotted by one of the museum's security guards, Vanessa (Niki Spiridakos), who has him removed from the premises. When her boss learns about the incident, he fires Vanessa on the spot.

That night, Tom and Vanessa are reunited under the strangest circumstances. Tom's best friend and drinking buddy, Marty (Allen Kellogg), has announced that he will be getting married to his girlfriend, Bernadette, in Bernie's home town in Ireland. Not only has Tom been chosen as Marty's best man, it turns out that Bernadette's maid of honor is none other than Vanessa. 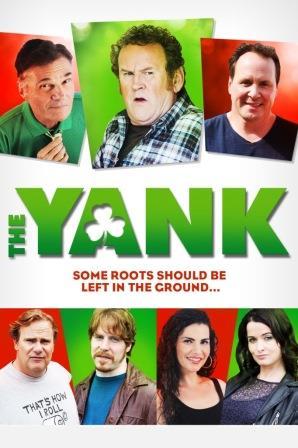 Poster art for The Yank

That's pretty much all you need to know to figure out how the movie will end. But give credit to Lackey for developing some novel plot twists, refreshing comedic moments, and casting a solid ensemble of supporting actors that includes Colm Meaney as Tom's Irish cousin, Fintan McGuire; Kevin P. Farley as his drinking buddy, Fred Finnegan; Lynette Callaghan as the seductive Molly Sweeney, and Martin Maloney as her combative brother, Declan.

Shot on location in Cleveland, Dublin, and County Clare, Ireland, The Yank benefits immensely from Keith Nickoson's cinematography. Lest one make the mistake of dismissing Lackey's film due its small budget ($1.2 million), let me state that I found The Yank far more appealing -- and interesting -- than 2010's Leap Year (the heavily promoted rom-com that starred Amy Adams and Matthew Goode). Here's the trailer:

Although Chad Beguelin's play, Harbor, has two male and two female characters in it, you won't find much romance in its plot. In fact, one would do better to remember that the word "harbor" can be a noun ("a place on the coast where vessels may find shelter, especially one protected from rough water by piers, jetties, and other artificial structures") as well as a verb ("give a home or shelter to").

As Harbor begins, the audience meets two women in a van. Behind the wheel is Donna (Terri Whipple), a mid-30s, questionably talented singer and determined grifter who is about to ruin the domestic tranquility of her younger brother's life in Sag Harbor, New York. The rough seas which give momentum to Beguelin's story are generated by this monstrously irresponsible and narcissistic creature whose selfishness and insensitivity to the realities of anyone else's life bring a rare level of feminine toxicity front and center. In another era, Donna would be described as a woman with no redeeming social values.

Accompanying her is 15-year-old Lottie (Jenna Herz), the self-taught, self-conscious, self-effacing, and responsibility-driven child who has spent much of her adolescence as her mother's keeper. While Donna's level of intellectual curiosity has not progressed much past tabloid television and celebrity gossip, Lottie is deeply engrossed in reading Edith Wharton's 1905 novel, The House of Mirth. 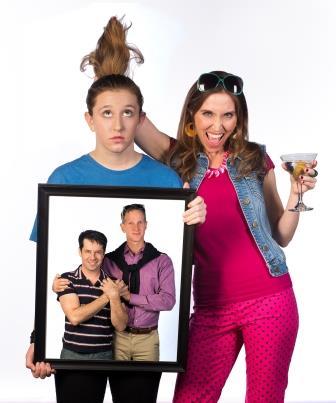 In the few minutes of tranquility remaining in their lives, Donna's gay brother, Kevin (Scott Cox), is struggling to write some copy for a tourism brochure while his husband, Ted (Andrew Nance), is attempting to lend emotional support. Kevin is an aspiring writer who has been working for the past 10 years on a novel that has gotten absolutely nowhere; Ted is an architect whose firm may have lost some business recently but can still afford to pay for frequent travel, impulse shopping, and a steady supply of booze.

Having recently discovered that she is once again pregnant, Donna's ulterior motive is to convince Kevin (who always wanted to be the Mommy when they played house in a highly dysfunctional white trash family) to adopt her infant following its birth and raise it in a secure, A-gay environment. The fact that she is steadily drinking and smoking dope while pregnant doesn't seem to matter to her. Nor has Donna given any thought to the fact that Ted and Kevin basically hate kids. All she really cares about is her chance to audition for a gig as a lounge singer on a cruise ship. 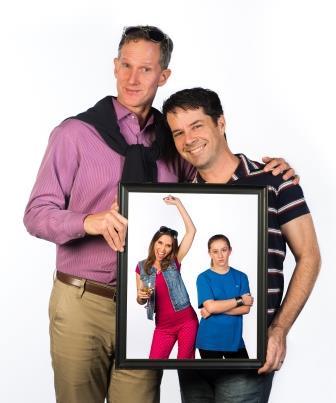 Directed by Ed Decker, the New Conservatory Theatre Center recently presented the West Coast premiere of Harbor in a production designed by Devin Kasper. While Beguelin's script is filled with acidic laughs, there is no escaping the sheer loathsomeness of Donna's amoral behavior or the casual (and jealous) homophobia with which she keeps alluding to Ted and Kevin's lifestyle.

A woman who thinks nothing of referring to her daughter as "Bee-yotch" or confessing that she always thought a misogynist was a person who gave great back rubs, Donna's parenting skills and crushing ignorance are dangerous enough to make people like Jenny McCarthy and Sarah Palin seem like role models for budding intellectuals.

On one side of the equation is a scheming succubus whose teenage daughter has, for years, been held hostage to her mother's delusions of grandeur and desperation to remain in touch with pop culture. On the other are two financially stable gay men going through the motions of being in love with each other.

When the shit finally hits the fan, Beguelin does a skillful job of letting the architect tell the wannabe writer that he doesn't have any talent and then proceed to call Donna's bluff by asking exactly how much money she was expecting to receive by shaking down her brother while saddling him with the responsibility of raising her child. 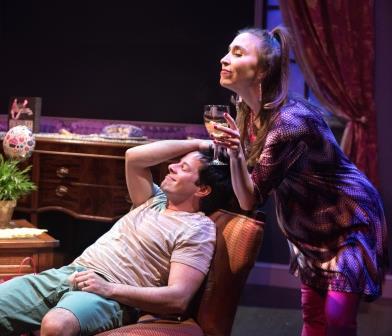 Scott Cox (Kevin) and Teri Whipple (Donna)
in a scene from Harbor (Photo by: Lois Tema)

There's an old saying that "Money talks and bullshit walks." To his credit, Beguelin has found a way to re-arrange personal loyalties so that, whether or not each character can understand what has just happened, at the end of the play everyone is better off than they were at the beginning. Translation: it's amazing what kinds of crises can be made to disappear with a substantial bribe.

What I found remarkable about the way the playwright has structured each character's growth is that the person with the ability to trigger a startling chain reaction is neither the oldest, the neediest, the best educated, or the most manipulative. Instead, it's the teenager whose keen vision spots an escape route from an intolerable future. 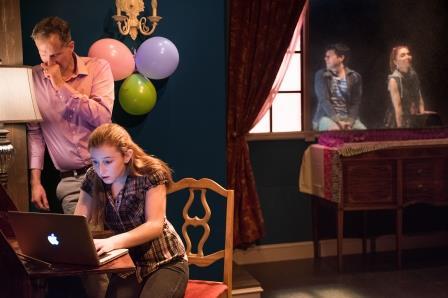 Lottie (Jenna Herz) comes to the rescue of Ted (Andrew Nance)
as Kevin (Scott Cox) and his sister, Donna (Terri Whipple)
hit the road in Harbor (Photo by: Lois Tema)

If the two women suck up most of the oxygen in the play it's because Donna is eternally desperate to remain the center of attention while her daughter is loathe to share any spotlight with her monstrosity of a mother. By contrast, the lack of spine shown by the two gay men may have a lot to do with their years of trying to take care of each other or, in Kevin's case, letting someone else take care of him.