"My idea of a perfect woman? A) she's gotta be hot." So starts a movie starring every single celebrity you've heard of in the past ten years and even some you haven't. 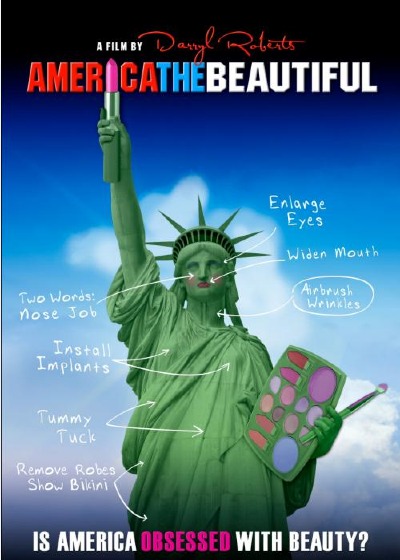 Interviewing such luminaries as Eve Ensler ("Stop fixing your body, it was never broken") and anti-luminaries (black holes?) such as Atoosa Rubenstein ("I don't think that advertisers and marketers are these people who want to make people feel bad"), Ted Casablanca ("Should the media be held responsible? I can't believe you are even asking me that question!") and Bonnie Fuller ("We're not going to put you on the cover if you're ugly. Ugly doesn't sell."), Darryl Roberts tackles America's dirty little secret. Well, as secret as Victoria's secrets are anyhow.

Let The Backlash BeginMen are often blamed for our unrealistic standards of beauty but this movies seems to make it startlingly clear that women are their own worst enemies.

"A lot of it is airbrushed. So women are coming in and asking for surgery that the actual models don't even have." Woman after woman is seen lining up to get a designer nose, sculpted abs or HDTV-worthy labia. The men just look shell shocked, as if a the heavens opened up and dropped a real-life Barbie in their Viagra-readied lap.

"Health isn't an option in this business. If you're going to worry about your health - go to college." The women in the video even acknowledge that what they are doing isn't in their own best interests. A six-foot 130-lb model (BMI 17.6) tries to lose 15 pounds. A fifteen-year-old investigates plastic surgery for her "pooch." The one man in the preview waxes rhapsodic about sculpting his abs and then when asked why a six-pack is so important, blanches and answers, "I don't know."

So now the question is: "WHY???" I guess we'll have to watch the movie to find out.