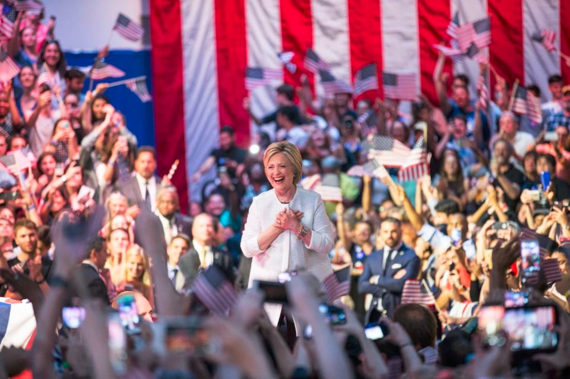 Four years ago, when I first began writing my book What Will It Take to Make a Woman President? Conversations About Women, Leadership & Power, there were no female candidates running for president and that benchmark seemed distant and out of reach. Last night, Hillary Clinton marked the milestone of becoming the first female presidential nominee of a major political party. As I watched her inspiring speech with my daughter (as well as the powerful "History Made" video which preceded it), it was hard not to be moved. As Hillary walked out to the stage to overwhelming applause and cheers, her face reflected clear emotion and pride as she experienced that historic moment with us. No matter where you stand on the political spectrum, this is a symbolic breakthrough we can and should all celebrate together, just as we did with Barack Obama's historic win. As Hillary said in her speech, "Yes, there are still ceilings to break for women and men for all of us. But don't let anyone tell you that great things can't happen in America. Barriers can come down. Justice and equality can win. Our history has moved in that direction."

With another history-making step taken last night, I looked back through some of my interviews for insight on the impact of having a woman in the White House.

What would having a woman president mean for our country, culture, and collective women's leadership? Why is it so important?

Having a woman break the presidential barrier would have an undeniable positive impact on women and girls in this country. The symbolism alone would be incredibly powerful, especially for young women and girls who would see first-hand that it is possible for women to be successful, respected leaders -- especially the highest leadership position of them all.

That's the reason I decided to write my book in the first place: my daughter. The book was inspired by my eight-year-old's seemingly innocent question after we were celebrating Barack Obama's historic win: "Why haven't we ever had a woman president?" Many interviewees in the book shared similar stories, such as Sheryl Sandberg, whose daughter noticed that there were no women's names in a song about US presidents, and this story from Lieutenant Governor of California Gavin Newsom and Miss Representation writer/director Jennifer Siebel Newsom:

"A few weeks ago, my wife casually mentioned something about a woman being president, and my daughter, who's three and a half--after all the indoctrination from birth on down around gender equality issues--says, 'A woman can never be president.' And that's in a household where we're trying to teach her and reinforce those opportunities. And our mouths dropped. It was to the old adage that 'you can't be what you can't see.' And the point being, every time Obama comes on TV, my daughter goes 'Obama, Obama, Obama!' Her image is so reinforced that it's a boy, it's a man. So from the earliest moments of childhood, you can imagine how that manifests in families all across the country and it creates a limiting belief and it creates a barrier of consciousness."

Putting aside whether or not they felt Hillary was the right woman for the job, everyone I interviewed agreed that it would be significant in so many ways to break that ultimate glass ceiling. Many felt that having a woman president would be an important step towards a government that reflects the diversity of this country; women make up over half of the population, after all (and the numbers of women currently serving in political office are still startlingly low: less than 19.4% of Congress, 20% of the Senate, only 6 women out of 50 Governors.)

As journalist Nicholas Kristof put it, "...The great strength that women bring when they move into senior levels of politics is not that they're more nurturing, caring, maternal figures, but that they will bring a certain level of different perspective, a different way of thinking, and that is just really valuable for all of us. This is not something that is just going to benefit the women of America; it's something that's going to benefit all of America." Democratic Leader Nancy Pelosi, the first female Speaker of the House, shared that sentiment: "It's about equality, but it's not just about equality. And the reason it's necessary to have more voices is because that strengthens the debate and it strengthens the decisions. It isn't that women coming in are better than men; they're different from men. And I always say the beauty is in the mix. To have diversity of opinion in the debate strengthens the outcome and you get a better result."

So what would a woman bring to the presidency?

Having a woman president would help shift the deeply ingrained idea in this country that leadership is a masculine role. As Pat Mitchell, the first woman president and CEO of PBS, told me, "One gender throughout most of our history has had power, so there's little wonder that when we think of power, we think about it in one-gender terms. So we need to change that, and we can only change that by changing the people who have power. A new power paradigm emerges when a different gender holds it, has it, and then uses it differently. I mean, if women get power only to be just like the guys who had it before them, then that's not progress."

Would a woman govern any differently than a man? Interviewees had varied opinions on this, but many pointed to evidence that women do bring a new approach to leadership. As political commentator and former MSNBC host Melissa Harris-Perry told me, "I think there is reason to think that there are some substantive differences in how women govern, both stylistically and in terms of the policy output. And that's just the empirical work of women in politics--scholars who show us that, in fact, when you have more women in a state legislature, for example, you're more likely to have real bipartisan bills passed, that women tend to introduce more legislation on issues of the environment and education than their male colleagues."

Robin Morgan, author and co-founder of The Women's Media Center, agreed: "There is a real difference in the way women practice power." She cited the example of the monumental changes that took place in Norway under female prime minister Gro Harlem Brundtland in the 80's and 90's when she appointed the majority of her cabinet women: "Policies on everything from employment and child care and flextime and work hours to environmental policies to you name it--it just changed. It was absolutely enormous. And the same thing is happening in Rwanda now, because a majority of the parliament are females."

Former Republican Senator Olympia Snowe said this: "Obviously it's very difficult to stereotype, but I think there is a collaborative facet to women in the way in which they approach legislative solutions, similar to life. And I think women are much more practical. I think that's sort of a connection among us: we're looking at the practicality of how we can get something done, how can we accomplish it and move forward, because we're juggling so many different things in our daily lives. From that standpoint, I think, yes, women bring those indispensable ingredients to the legislative process, and that's why it's healthier for governing institutions to be more reflective of the broader society and certainly to include more women in the political process."

Julie Zeilinger, a recent college grad, author and founder of the young feminist zine The F-Bomb told me, "From the point of view of my generation, I think visibility is so important in inspiring future generations of leaders. If we don't see female politicians out there, and we don't see them in equal numbers to men, then going into politics, or leadership in general, doesn't seem like a viable option for us."

No matter who the first female president is, everyone I interviewed agreed her election would serve as an important symbol and be an inspiration to women regardless of age, ethnicity, race, or background. There was also the sense that having a woman president would act as a hopeful benchmark that our society is moving toward greater equality and diversity--not just of progress for women, but for all minorities. As Maya Angelou told me, "I think we are more ready for [a woman president] than we think we are. We are growing up out of the idiocies--racism and sexism and ageism and all those ignorances."

I look forward to the day when our daughters don't have to wonder why there have been no women presidents, but when there have been several for them to look up to and learn from-- and when they too can easily imagine that they might very well be the next.

Portions of the above originally appeared as part of Marianne's series A Woman President: Conversations About Women and Leadership in partnership with Political Parity. For more articles, podcasts and interviews from this series, as well as other news and events around the What Will it Take campaign, click here.

Marianne Schnall is a widely published writer and interviewer whose writings and interviews have appeared in a variety of media outlets including O, The Oprah Magazine, Marie Claire, CNN.com, AOL Build, the Women's Media Center and The Huffington Post. She is also the co-founder and executive director of the women's website and non-profit organization Feminist.com, as well as the co-founder of the environmental site EcoMall.com. She is the author of Daring to Be Ourselves: Influential Women Share Insights on Courage, Happiness and Finding Your Own Voice and What Will it Take to Make a Woman President? Conversations About Women, Leadership, and Power. You can visit her website at www.marianneschnall.com.