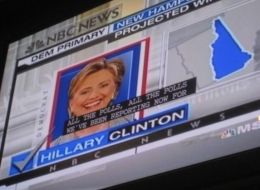 NO WAY. This is a crazy, shocking, hilarious, amazing, game-rocking result. How many people had the Clinton obit written? Well, this guy, for one. This changes everything. This race is on, and something feels like it righted itself, because what was happening with Hillary before felt wrong, for a candidate of her skill and stature, and for someone who really did have so much support, despite the high negatives. It felt wrong, to me, after being on that bus and seeing her speak on Sunday. It also felt wrong vis a vis Obama — not his movement or amazing victory, but some of the negative stuff, like not addressing the booing of Hillary from his supporters on Friday night, or the ungracious "you're likeable enough" after she just said he was very likeable. But generally, it seemed completely off to have John Edwards declaring that this was a two-person race — it seemed wrong and not a reflection of reality. And it didn't seem like the way a leadership race — this leadership race — ought to go.

The quote above is from Brian Williams on MSNBC minutes before they called her as the winner. He noted that this, taken in tandem with Iowa, could be read as a rejection of coronation, for any candidate. Said Rachel Maddow slightly earlier in the evening: "What New Hampshire did was come out and body slam the national establishment press." Said Williams: "Voters have decided, 'this goes on from here.'" That's a good thing — and when it does, everyone in it will be better: The press will be better, because this is twice now they've jumped the gun, and twice that they've been wrong; and both Hillary and Barack will both be better, because they'll be reminded that victory is hard-won, and not assured, and no one's right, and a lil' dose of humility never comes amiss. Every candidate who gets back up after being knocked down is better for it. Democrats are lucky that it worked out this way: Instead of knocking out a great candidate early, they get two candidates in the race who are better for it. Now that's a victory.