Shia "I AM NOT FAMOUS ANYMORE" LaBeouf has an explanation for his increasingly erratic behavior -- he is an artiste.

According to LaBeouf, the plagiarism, the apology via skywriter and the head-butt brawl can all be chalked up to a grand piece of performance art. Yes, the 27-year-old actor is claiming all the world's a stage and we are all merely players, to paraphrase Shakespeare. On Saturday, LaBeouf posted two lengthy statements to Twitter, which have since been deleted.

"Performance art has been a way of appealing directly to a large public, as well as shocking audiences into reassessing their own notions of art and its relation to culture," the actor explained. "All art is either plagarisum [sic] or revolution & to be revolutionary in art today, is to be reactionary. In the midst of being embroiled in acts of intended plagiarism, the world caught me & I reacted. The show began. I became completely absorbed, oblivious to things around me."

LaBeouf, who stars in the upcoming film "Nymphomania," went on to write that his Twitter account is a work of "meta-modernist performance art" and asserted that his tweets have started a "broad cultural discussion that needs to be had about plagiarism in the digital age & celebrity/social media absurdity."

Basically, LaBeouf claims he's totally self-aware, and he's been risking his "public representative's skin to prove [his] platitudes." That might sound like a total cop out, but the precedent has been set before -- thank you very much, Joaquin Phoenix.

The former Disney star went on to post a long list decrying the definition of performance art before making reference to his bar fight at the Hobgoblin in South London last week, tweeting, "#StopHeadButting.”

All of this has since been deleted, and in its place, yet another tweet reminding us of what LaBeouf surely tells himself every time he gazes upon his own reflection:

Because the Internet is forever, you can read LaBeouf's now-deleted explanation below: 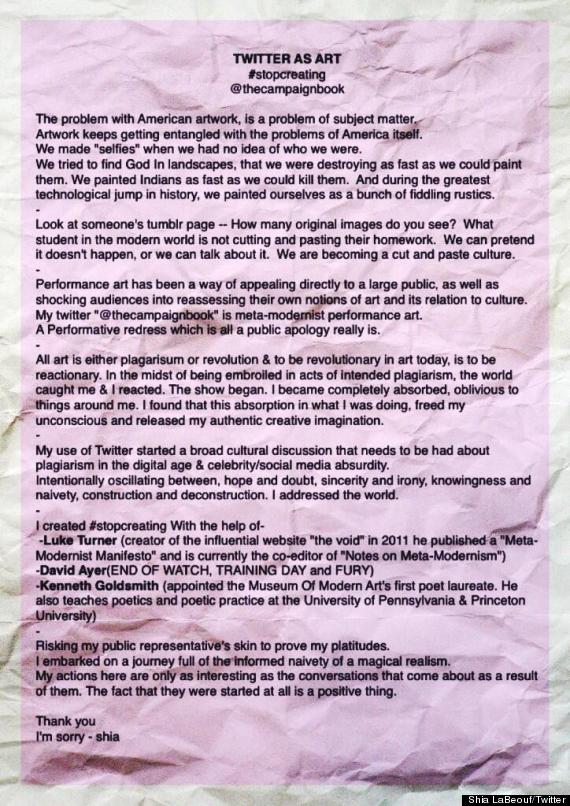 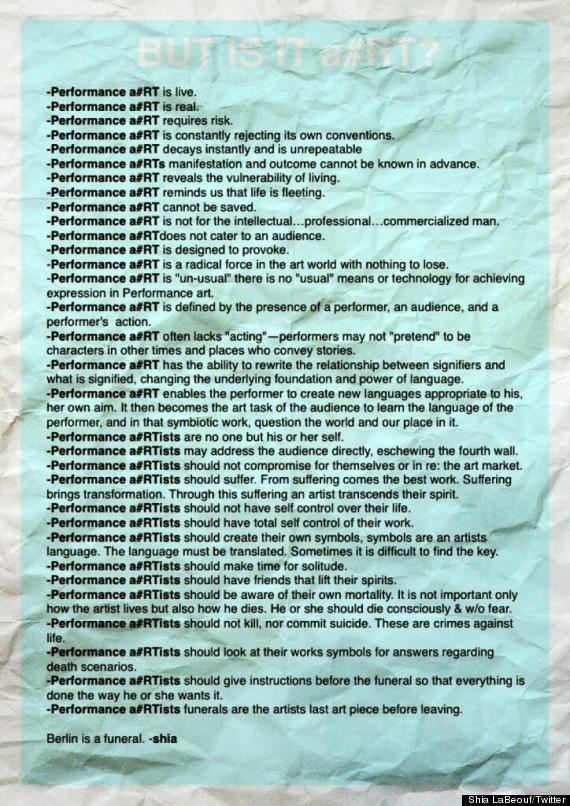