In the middle of June, at the Old Bronx Borough Courthouse at East 161st Street and Third Avenue, a large gathering of people came together to hear panelists parse the "New Dynamics in the Bronx Art Scene."

The event was organized by the Hostos Center for Bronx Nonprofits (CBNP), as part of an ongoing "Public Conversations Series." The dialogue went far deeper than a mere discussion of the current landscape of the Bronx art scene. It raised questions, and some hackles, about competing community needs, gentrification, constituencies that are too frequently powerless, and big money.

Executive Director of CBNP, Eileen Newman, introduced the proceedings. Sarah Calderon, the Director of Casita Maria Center for Arts and Education, served as the moderator. Each of the seven panelists gave an opening statement -- laying the groundwork for their insights. 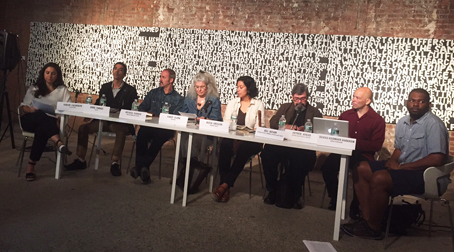 Arthur Aviles, Founder and Creative Director of Bronx Academy of Arts and Dance, raised the question of how the creative community can "stay vibrant in a capitalistic society." He referenced the importance of artists having space to create their work. "Bronx arts are moving around," he said, "and the works being created are empowering to women, people of color, and the GLBT communities."

Multidisciplinary artist, Alicia Grullón, noted, "It's an exciting time for the arts in the Bronx." She acknowledged that artists were being blamed for some of the recent development. "We need a wider conversation that must involve long-time residents. People are being pushed out." Grullón originated and has been leading the Percent for Green initiative, reflecting her concern with the environment and climate change.

Carey Clark, artist and Visual Arts Director at THE POINT, spoke to the potential results that could come from artists, art organizations, and the community working together to impact public policy. Qualifying the "downtown" Manhattan art scene as "elitist," it was clear that she was not looking to replicate that model in the Bronx.

Founder and Director of the Bronx Documentary Center, photographer Michael Kamber, embodied a very pragmatic point of view. Previously having lived in Dumbo, which he conveyed as "now all high rises," Kamber expressed concern about what he is currently seeing the Bronx. "The church down the street from me sold for $12 million," he said adding flatly, "I don't think we should be in this building today. We should not be in bed with the developers."

An ongoing concern for Dennis RedMoon Darkeem, artist and art educator, was the media "misportrayal" of the Bronx -- and how that impacts the way in which "residents view themselves."

Former Director of the Bronx Council on the Arts, Bill Aguado, who has been an activist and cultural leader in the Bronx since the 1970s, presented a succinct overview from his vantage point of four decades of involvement on the ground. "How do we define the artist?" Aguado asked rhetorically. He underscored the "people who were missing from the equation," explaining, "There are artists from different communities who are not part of the nonprofit system and who don't register in the nonprofit space." He enumerated those who are creating in fashion and hip-hop, as well as subway taggers. "We have challenges within our own universe," he stated. Determining the "proper role" for Bronx cultural organizations was key for Aguado. "We need to be in touch with individual artists."

Rounding out the group was Edwin Torres, Deputy Commissioner of Cultural Affairs for New York City. Torres grew up in the South Bronx and was Director of the Longwood Art Project before he worked at the Ford Foundation and the Rockefeller Foundation. He laid out what he considered two major issues: how the Jerome Avenue corridor will evolve and the development of Mott Haven. Within that framework he placed "the social impact of the arts."

With a move from individual statements to an exchange of ideas, specific points of view crystallized -- and it was clear that there were distinctly different concepts on how to tackle the problems. The common thread, in varying forms, was succinctly encapsulated by Aviles. "We have a capitalistic mentality. The power structure is the bottom line. It's all about the money."

"Follow the money, "Grullón said, "and divest from those funders. She gave the Koch brothers (Think the David H. Koch Theater at Lincoln Center and the Metropolitan Museum's David H. Koch Plaza) as a prime example. Grullón offered four points to ensure against displacement for artists and working class people: "Full taxation of corporations, effective community benefits agreement, housing protection and zoning, and protection of the commons."

Kamber, who bought the building the Bronx Documentary Center is housed in said, "For me, art is very political. We're interested in engaging the community. People need jobs." He asked, "Why are kids dropping out of high school?" As part of the Center's mission, Kamber has put in place educational programs to effect social change through film and photography.

Outlining the work being done at THE POINT, Clark spelled out, "We have all the arts under one roof, and the artists are involved in social engagement." Their programs are devoted to youth development, community development, and arts and culture.

"Artists are entrepreneurs," said Aguado. "Why can't we support them directly? There is a lack of equity in funding. Artists get exploited and they move out. And what about creatives who don't self-identify as artists?" He highlighted, "Poverty will always be an issue for people of color in our city."

"The most important thing for artist," said Aviles, is that "they have a place to live and work -- and make a living wage." When Darkeem addressed the need to have a larger discussion on the relationships between non-profits, the community, artists, and business, he suggested acerbically, "Artists must organize and not let Bronx Borough President Rubén Díaz, Jr. make decisions for us."

As soon as questions were taken from the audience, sparks began to fly in reaction to the colliding agendas. In the crowd were leading activists in the community and from the arts including Deirdre Scott (Executive Director of the Bronx Council on the Arts), Ed García Conde (Welcome2TheBronx), Linda Cunningham (Co-Founder of Bronx Art Space), and Lisa Ortega (Take Back the Bronx).

The top concern was getting a clarification of the relationship between the No Longer Empty (NLE) organization (whose tagline is "Revitalizing Space, Unlocking Creativity") and real estate developers. Manon Slome, President and Chief Curator of NLE stepped up to answer heated accusations stating, "We're using underutilized spaces. We're here to provide platforms. We're not here to gentrify."

Ortega, advocating for the agency of the Bronx community, had a different reaction about what was taking place at the Old Bronx Borough Courthouse. "It's about us taking back the building," she stressed. "The non-profit is part of the problem. Artists are pawns in the larger equation." Her bottom line was, "Why are gentrifiers being allowed into the community?"

Aguado drilled down on the need for the arts to make a statement. "We have to be part of the process. Our voices need to be heard," he said, reiterating, "Artists of color must have cultural equity."

There was, however, a definitive consensus with the observation by Dennis that the "New Bronx" language being pushed by politicians and developers does not bode well for the borough.

Is there a conflict between artists and members of the community? Dennis was clear, "Art matters." Kamber emphasized, "We were created to serve the underserved Bronx community." Clark said, "THE POINT is an incubator for the arts and social services. It's a community based arts component."

I followed up with several people after the formal discussion had ended. Cunningham, in response to the artist vs. community concern, affirmed, "We're allies." Shellyne Rodriquez, who has work in When You Cut into the Present the Future Leaks Out (closing July 19) offered, "Art organizations are choked out of federal money so they have to go to private funding. Artists are pawns. How can we speak to truth if the community doesn't trust us?"

When I caught up with Sloane, she was walking a visitor around the Future Fix room, an exhibit put together by Teens Curate Teens -- student curators of work culled from submissions from the ArtConnection's Student Art Program. She spoke about the curatorial training, the work being shown, and the Youth Docent Program -- another feature of the NLE education engagement. On the linked events at the Courthouse, Sloane pointed out, "We achieved what we wanted by opening a dialogue." 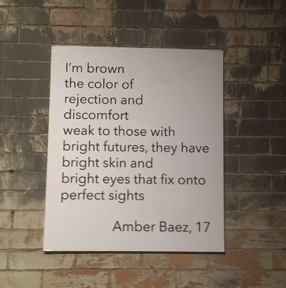 I went back to revisit the works in When You Cut into the Present the Future Leaks Out. I was struck by Michelle Lopez's Untitled video, sculpture, and sound site-specific installation which examined how birds misinterpret their own images reflected in glass, thereby attacking it. In her proposal for the piece, Lopez writes, "What interests me in this construct in what it might reveal: the narcissus complex of protecting identity to the point of destruction. The futility of pecking at the window again and again without a cognitive sense, but of desire, strikes me as appropriate for such a structure as the Bronx courthouse." Without the backstory of the ornithology that Lopez researched, and with the panel conversation reverberating in my mind, I experienced the bird as trying to crash a glass barrier -- which it didn't understand was not transparent -- with repeated futility. 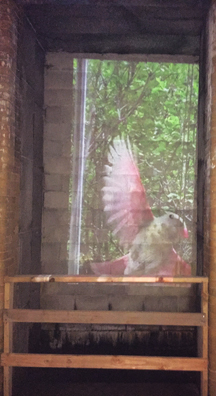 Returning to the room where the panel was held, on the opposite side was the Undesign the Redline installation created by Designing the WE. An interactive project, it laid out how "structural racism was designed into our cities and it has never truly been undone."

There appeared to be a consensus that just holding the panel event was an important beginning in the exchange of ideas. Yet, as I heard one person remark, "It's only the tip of the iceberg." 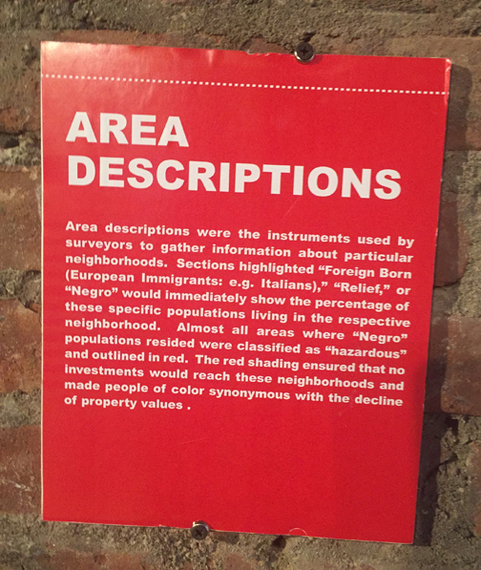