The global financial crisis has reversed an expansionary trend of international activities by banks from advanced countries that had been at play for decades. From the late 1970s to 2008, banks not only found new opportunities for intermediation in increasing cross-border capital flows, but they also raised their profile in domestic credit provision abroad. We are now watching an upheaval of that landscape, its ground dramatically shifting with the unfolding of the crisis.

As highlighted by Mansoor Dailami and Jonathon Adams-Kane in this week's Economic Premise- - "What Does the Future Hold for the International Banking System?" - European banks wrote their own chapter of that story (see chart below, from Dailami's and Adams-Kane's report). The European integration set the stage for their expansion, going much beyond the euro area's limits. They also became key agents in the operation of the U.S. "shadow banking" system, releasing themselves from dependence on retail deposits by borrowing in money markets to build a fast-growing asset base denominated in U.S. dollars. 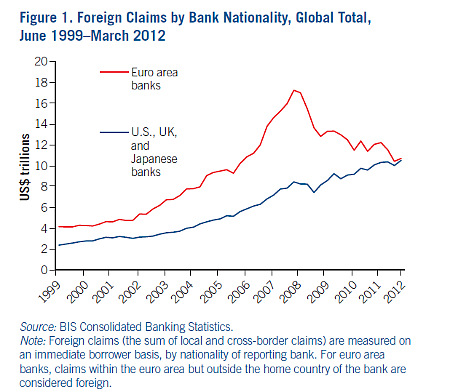 The pre-2008 era in global finance may be called a "Great Leveraging." Banks and non-banking financial institutions overstretched their balance sheets, indulging themselves on sources of non-deposit funding in order to scale up asset holdings that were many times larger than their capital base. Their newly found source of funding was highly sensitive to interest rate changes, credit risks and events. On the other side of their balance sheets, real estate bubbles and other hyper-inflated assets in the U.S. and some parts of Europe comprised the top of an asset pyramid erected with flimsy foundations.

A "Great Deleveraging" started when, under market and regulatory pressures from 2007 onwards, financial institutions were forced to liquidate assets and retrench lending. Bank lending fell from 68 percent of global GDP in early 2008 to 50 percent in 2009, where it has remained. Raising more capital would have been the alternative to selling assets and shrinking loan portfolios, but clearly the confidence in the solidity of banks' edifices had evaporated.

Japanese banks did not embark on the "Great Leveraging", as they spent the last two decades healing from their own previous financial follies. U.S. banks managed to make rapid progress in deleveraging, and their loan-deposit ratios had already declined substantially by 2011. It is on the European side that the process kept unfolding at high-speed, and yet failed to reach comfort levels in terms of capital-asset ratios.

So what, you might ask? Isn't the system simply returning to the initial configuration prior to the "Great Leveraging", with European banks devolving part of their overreach? Let me single out two processes among those approached by Dailami and Adams-Kane that preclude such a return to the origin.

Firstly, the European deleveraging has been more of an unraveling process, one in which the end game remains elusive and banks may still undergo substantial balance-sheet downsizing. The financial crisis morphed into fiscal crises in several countries, and negative feedback loops between banks' portfolios and public debts have been at play. The euro area banking system is now fragmented into national systems, some of them facing dependence on fragile public debts, as well as large declines in deposits.

Secondly, the center of gravity of global growth is shifting toward developing countries. Not by chance, while European banks deleveraged and divested their stakes in the U.S, like their American counterparts they have made efforts to uphold domestic positions in dynamic developing countries. However, emerging-market-owned banks have been the greatest beneficiaries of that gravity shift and are seizing the opportunity to gradually become global players, snapping up market spaces left open by retrenching banks.

Such movement of tectonic plates has kept high the peril of landslides for euro deleveraged area banks, and one may expect the adoption of unconventional monetary policies by the European Central Bank to stay heavy and for long. On the other hand, given the structural fragility of the standing banking edifice, with remaining deleveraging pressures, one may not envisage an end to the euro area crisis if actions are not taken outside the monetary policy realm.

Follow the latest from Otaviano Canuto at twitter.com/OCanuto and keep up with the World Bank's efforts to help countries fight poverty and close gaps in income and opportunity at twitter.com/WBPoverty. For more Economic Premise notes, go to worldbank.org/economicpremise.