Portrayals of strategic default in 2009 were typically of homeowners who "used their home as an ATM," or "deadbeats." Even news stories describing the positive side of default didn't entirely shake those images. One of the earliest semi-positive stories was in the Wall St. Journal, titled "American Dream 2: Default, Then Rent." This article described a couple who had defaulted, cut their housing costs from nearly $4,000/month to just over $2,000/month, and were living in a bigger house with "a swimming pool with three waterfalls." Another strategic defaulter in the same article found the benefits of default-and-rent included the discretionary income to go out to dinner more often, and hang on to his series-6 BMW.

These are not the people I meet in the course of interviewing and writing about surviving tough times. The people I meet are laid off, or from two incomes down to one, or on their way to medical bankruptcy. They cannot imagine a swimming pool, much less a waterfall -- they just have bills they can't pay, one of which is the mortgage. Some are slow in adjusting to the "new normal," and still eat out regularly, but others have already cut back to eating out four times a year.

Their home may be underwater -- or they may have equity. Often it doesn't matter, when the bottom line is that they have to choose between the mortgage and medical insurance -- because losing medical insurance in America is potentially lethal.

For this group, it is not a matter of cunningly defaulting to maintain a latte-sipping lifestyle. It is a matter of prudently walking away from the mortgage that is dragging their family and future under the waves.

The benefit for people who act both prudently and decisively can be startling. Taking a fairly typical example from people I've interviewed, this is the family's financial situation:

They have done a careful financial projection. The total monthly expenses are $5,000, right down to the last dime -- which includes $2,500/month on mortgage and credit card bills. That says that if the main breadwinner is not fully employed in 14 months, they will lose the home -- and of course take a dip in their credit rating. And if the job doesn't come until the 13th month, it had better be at the same salary as the previous job, or they'll lose the home anyway.

Scenario A: Betting on a job, and continuing to pay the mortgage (a.k.a. "doing the right thing," according to the moralists). They guess that they will be fully employed again in time to save the home. They continue paying mortgage, car payments, and minimum monthly credit card payments. If their bet is wrong, their trajectory is shown by the red line below.

Scenario B: Prudently walking away. They decide that getting a job might require a career shift or relocation, with some time and money invested in re-education. They immediately stop paying the mortgage and credit card payments. In this scenario, they cut their expenses by $2,500/month (which rises to $3,500/month when they move out and start paying rent). If there is real equity in their financed car, they sell it and buy a used car to replace it. 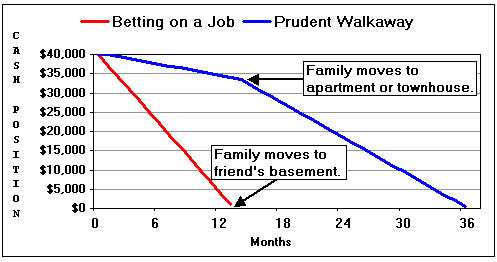 The difference between A and B is incredible. If the family bets the primary bread-winner will be working within the year and is wrong, they could be leaving their home without enough money to rent a decent apartment in 14 months -- exhausted, frightened, and possibly running on bald tires. (People who "do the right thing" tend to leave long before they actually get legal notice to move.)

The family that bets the primary bread-winner will not find a job in 13 months and stops paying the debts will be leaving their home with $33,000 cash in hand, move to a rental (usually in the same school district, if need be), and will have three years for the primary bread-winner to find a job. And that's their worst scenario -- it's quite likely they'll be in the house for 18-24 months without making any mortgage payments.

Conclusion: when the writing is on the wall, the best plan is often a prudent walkaway -- an escape to the future, equipped with enough cash to get there.

-->
Advertisement
This Blogger's Books
Walk Away From Debt For a Better Future
by Nicholas Carroll
Download
Calling all HuffPost superfans!
Sign up for membership to become a founding member and help shape HuffPost's next chapter
Join HuffPost