BAGHDAD, April 4 (Reuters) - Almost all Shi'ite paramilitaries had left Tikrit on Saturday after locals complained that some fighters had spent several days looting the Sunni city after helping retake it from Islamic State.

"Most of the (paramilitaries) were removed from the city," said Ahmed al-Kraim, the head of the council of Tikrit and its province Salahuddin.

The rampage of theft and burning began on Wednesday, within hours of the Iraqi government declaring that security forces and Shi'ite paramilitaries had recaptured the city from Islamic State (IS) after a month-long battle. IS had held Tikrit since last June.

Local officials said the mayhem left hundreds of homes and shops looted or torched. The violence had threatened to cast a pall over the government victory in the city, home of the late dictator Saddam Hussein.

Prime Minister Haidar al-Abadi, a Shi'ite Islamist, met officials from Salahuddin province and took the decision that the paramilitaries had to leave Tikrit.

The Sunni politician said that the looting and burning had stopped on Saturday after "the federal and local police along with (counter-terrorism) troops became responsible for Tikrit's security."

A spokesman for the Shi'ite paramilitary fighters, Karim al-Noori, confirmed that 80 percent of the Shi'ite volunteer fighters had left Tikrit.

"The situation now is calm," said a police major in Tikrit, speaking on condition of anonymity.

Some eyewitnesses and government officials also blamed local Sunnis for the looting.

Abadi, a moderate Shi'ite Islamist, has insisted that he will not tolerate rights abuses by any group in the war against IS, which has massacred thousands of Iraqi Shi'ites and members of other groups.

Iraqi troops, working in tandem with Shi'ite militias, secured Tikrit on Wednesday, but as the government declared victories, paramilitary fighters started ransacking buildings, according to local officials and witnesses.

On Friday, Abadi had ordered security forces to arrest anyone breaking the law and then convened his meeting on Saturday with Salahuddin's governor and key officials.

"It sent a clear message to everyone. Although it is very challenging, the prime minister is on the top of situation," said Rafid Jaboori, Abadi's spokesman. (Reporting by Ned Parker; Editing by Robin Pomeroy and Stephen Powell)

Shiite Militias Pulled Out Of Tikrit After Looting: Iraqi Officials
Battle For Tikrit 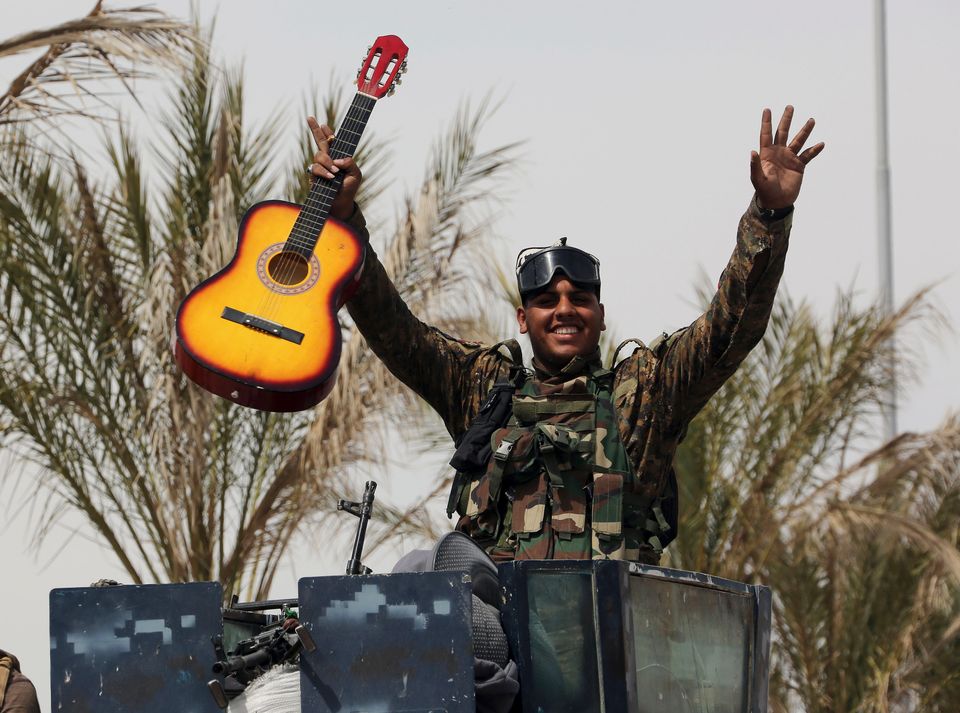 1 / 16
An Iraqi soldier celebrates with his guitar atop his armored vehicle on the main road between Baghdad and Tikrit, April 3, 2015.
AP Photo/Khalid Mohammed