The Anti-Defamation League (ADL), fresh off of several PR gaffes, recently managed to pull off another head-scratching moment by compiling and releasing a list of the "top ten most influential anti-Israel groups in America."

In other words, an organization that describes itself as "the nation's premier civil rights/human relations agency that fights anti-Semitism and all forms of bigotry, defends democratic ideals and protects civil rights for all" is spending its resources decrying American organizations that are not blindly supportive of a foreign government it likes to align itself with. 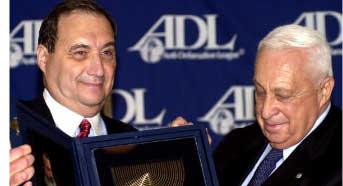 If that's not fishy enough, what the ADL's list really showcases are the top ten most influential groups that have taken a principled anti-occupation and anti-displacement position and who call for a just peace. Why does that bother the ADL?

Here are a few thoughts on this list:
Advertisement

The ADL cannot point to one release from CAIR that can be described as bigoted against Israelis as a people, let alone against Jews. CAIR's releases and rallies have only addressed the occupation and the questionable actions of the government of Israel. But as I mentioned the ADL tries to equate opposition to the occupation and the illegal practices of the Likud government to bigotry and anti-Semitism in order to create a chilling effect.

Does the ADL really believe that FOX News "fights bigotry and promotes democratic ideals and equal civil rights for all"? Has Abe Foxman watched FOX News coverage of Muslims, Latinos, or immigrants lately? Why would the ADL offer Murdoch its "International leadership" award? Because the ADL's awardee selection committee is more concerned with where a candidate stands on Israel, even at the expense of where he stands on bigotry, democratic ideals, and equal civil rights - once again bringing to light the disturbing shift in the ADL's mission and raison d'etre.

In response to the Israeli Navy's raid of a flotilla of ships heading to Gaza in May 2010, the executive director of CAIR-Chicago accused Israel of a "failure to apply Jewish values"

I am not sure what Abe Foxman's problem is with that? The Chicago Tribune piece that he is referring to was decidedly pro-Judaism. I received many thank you notes from Jewish friends and strangers including Rabbis. Given the gravity of the Israel violations at the time, many emailed to say that I was gracious and restrained.

So why did Foxman take issue with this piece, you may ask? Well, because the piece was decidedly anti-occupation. Another exhibit for the ADL's changing priorities.