Last week, the fourth Israeli Presidential Conference, "Facing the Future," concluded, and I was privileged to attend. Although I was not in a temple praying, I saw what was happening as a form of religious expression and had to a certain degree, a religious experience.

Rabbi Abraham Issac Kook writes in his classic work on Jewish spirituality, the "The Lights of Holiness":

"The great dreams are the foundation of the world. They are manifested on different levels. The prophets dream, as God is quoted in saying, "I speak with him [a prophet] in a dream" (Numbers 12:8). The poets dream while awake, the mighty thinkers dream of perfecting the world. All of us dream of the time "when God will return the captivity of Zion" (Psalm 126:1)"

I look at the yearning to bridge the gap between the real and the ideal as an expression of my Judaism and for me the Presidential Conference was a gathering of great dreamers and mighty thinkers trying to answer the question, "How are we going to make a better tomorrow?"

During the first plenary session called "Learning from our mistakes," I heard Harvard Professor Michael Sandel and author of "What Money Can't Buy" speak about the need to avoid the confusion of market reasoning and moral reasoning, because not everything is for sale. That gratitude, love of learning, and kindness should be done for the sake of themselves. I attended panels with great thinkers like Leon Wieseltier, the Literary Editor of The New Republic as he debated Jewish education with Professor Peter Beinart author of "The Crisis of Zionism." I watched Russel Simmons, the founder of Def Jam records, speak as a yogi about his efforts to bring together Jews and Muslims for the sake of peace and higher consciousness. Throughout the day Nobel laureates, writers, politicians, activists and artists engaged in discussions about the future of Israel, and core questions about how to live a meaningful life.

During a press conference organized for bloggers I was able to ask President Peres a question. I like to call myself a Jewish spiritual activist because I believe that change not only has to happen on the outside but also on the inside. So I didn't ask President Peres about politics or economics, I asked him about prayer. My question was, "If I were going to the Kotel (the Western Wall) to talk to God, what would you ask me to pray for concerning Israel?" At first I wasn't sure he was going to answer because he simply said "what God wants" and the crowd chuckled, but then he reflected for a moment and went on and spoke about the idea that he does not think of God as an authoritarian deity that controls us from the outside, but that God is inside of us, and that if we listen we can find guidance and ultimately he would pray that God "continue to give the right advice and we shall do the right things." 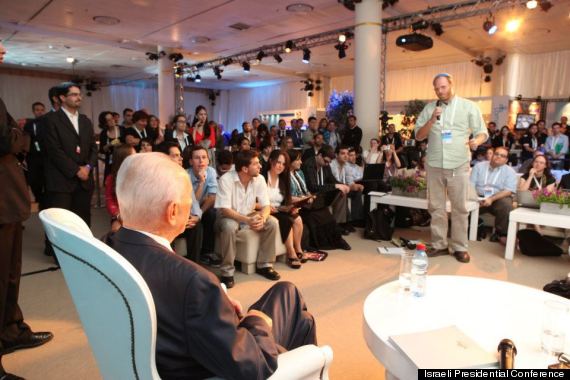 Listening President Peres speak during the bloggers session and throughout the conference, I was struck by his depth of thought and universality. I felt like I was listening to a a wise elder (President Peres is 89 years old), a grandfather of the State of Israel, share the wisdom his experience has taught him with the next generation. What he said about prayer echoes some deep teachings in Torah.

It says in the Torah that human beings are made B'tzelem Elokhim (in the image God), and Hassidut (a school of Jewish spiritual teachings) gives over that we all have a spark of God inside of us. Jewish tradition teaches that in our times, God is hidden and the age of revealed miracles and direct prophecy is over, but that God is still present in our lives, and that we can still receive guidance by going inward and tuning into what is called binat halev, translated literally as the "knowing of the heart" and also as "intuition." During the morning plenary, Nobel Prize winner Professor Daniel Kahneman best selling author of "Thinking Fast and Slow" spoke about how people make decisions, learn from their mistakes and how complex making a good decision is. It heartens me to know that a statesman like President Peres knows that decision making is not just based on reason and analysis and that he can also turn within.

I have been accused of being of being an idealistic dreamer. Many times after questioning the status-quo I have been told to "be realistic" and "thats just the way the world works." Those answers were never good enough for me, I wanted to know why and why not. Israel, my home, is a country founded by idealists. After 2,000 years of exile the Jewish people returned to their ancestral homeland and brought into reality what was thought by many previous generations of Jews to be an unobtainable goal. The tagline for Nefesh B'Nefesh, which helps diaspora Jews make aliyah (move to Israel), is "Live the Dream." Theodore Herzl, in response to what seemed to be his impossible vision of a Jewish homeland responded, "If you will it, it is no dream."

The State of Israel in a large way is the political expression of the Jewish people. Attending the Presidential Conference I saw the best side of Israel, a people thoughtful, questioning, idealistic, self critical, passionate and moral. Although the state of Israel is wrought with internal and external challenges, it affirmed to me that is was a good decision to make aliyah, to continue the efforts of the people who came before me in building the Land, and even in the face of seemingly impossible odds to continue to work for a better tomorrow.

During the closing session President Peres summed up for me a core sentiment of what it means to be a Jew, a people who wrestles with God, when he said, "For me, dreaming is simply being pragmatic." I left the conference feeling grateful for the experience, and I will make sure to put in a word with "The Boss" for President Peres next time I am at the Western Wall.