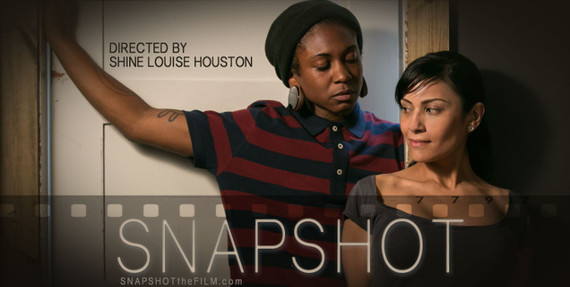 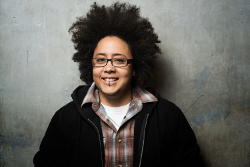 Jiz Lee has become an important part of Pink and White 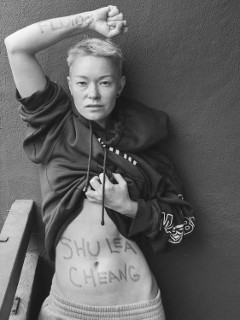 productions, and is just as passionate about this campaign as Shine, so much so in one of the perks aptly called "Jiz Lee's FLASH Thank You" they will write your name on their belly, and post a photo and a shout out on social media. And let's just say it has been pretty popular, so if you're interested you might want to get in on it ASAP.

Snapshot is a murder mystery - why?

I'm a big fan of Alfred Hitchcock and when I was thinking about the main character, Charlie, who's a photographer, naturally I started to think of Rear Window. Hitchcock created this term, MacGuffin. It's really a plot device that drives characters in one direction but doesn't have any real weight in the true story. So the photo that Charlie accidentally takes of a murderer is a device to get her to meet Danny, her love interest, and begin a journey into uncharted emotional territory. The mystery also symbolizes their triumph over fears of intimacy. 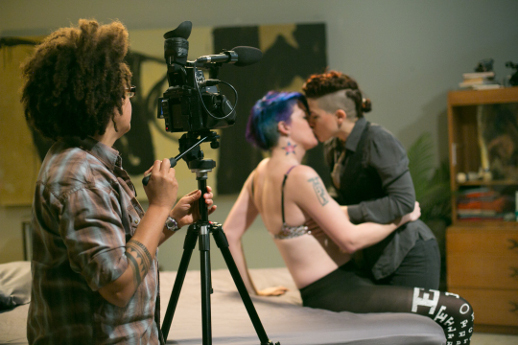 Without giving anything away, do you have a favorite aspect or scene in the film?

One highlight is a scene where Charlie whispers 'I Love you' to Danny in a group sex scene. Usually in films the first time someone says 'I love you' to someone else it's just the two characters in a close intimate setting. Not in Snapshot. I wanted to avoid the cliche.

Some might assume we're seeing some of your fantasies acted out on screen - is that true?

It's not the norm for me. In the past I've tried to keep my own proclivities out of things (with the exception of high heels) so the talent could negotiate what they wanted to do with each other, which I think is more important for a good scene. But Charlie is a voyeur and I'm a voyeur. So there are two scenes that speak to my own fetishes.

So you're a voyeur, and I've heard you have a foot fetish - do you have story?

Yes, I was taken to the Lusty Lady for first time. The Lusty was a peep show where you went into a dark and sometimes sticky booth and put your quarters into the machine and the window would open up to a room filled with half naked ladies dancing. When the screen came up in my booth naturally I asked to see her shoes.

But as I was watching her, I happened to glance behind her and was shocked to see my own reflection. The back of the room was mirrored and I saw a look on my face that I'd never seen before. So from then I've been a bit obsessed with the watching of the watching of the watching. I've always liked to look but that experience put an extra spin on it that has permeated most of my projects in some way or another. But I've never so directly referenced myself in a project until Snapshot. 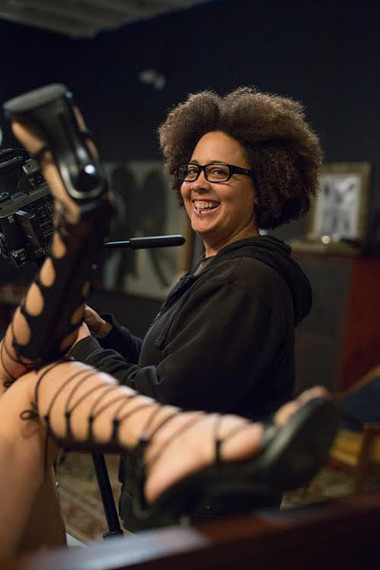 So lets switch gears - why did you decide to use crowdfunding to finance SnapShot?

I'm crowdfunding Snapshot because I wanted to keep all creative control over the movie and as a small company it would take far too long to save up a decent budget, so we looked to crowd funding to supplement our own financial contributions to the movie.

Since it's a new way to go for you, how did you feel about the idea of using crowdfunding at first?

I was skeptical at first. I worried that folks wouldn't fund our project because it seems like a lot of people think we're a much larger company than we really are, so why would they want to give money to a big company? I'd seen projects get booted from Kickstarter for being associated with the adult industry so I thought we just wouldn't pass their TOS. I know there are adult crowd funding sites, but they're not as recognized by the general public. In the end we went with Indiegogo and were very up front with them about the nature of the project, and surprisingly we passed inspection.

I think it offers more voices to get a chance to be heard without censorship (but to a degree - there are laws we all have to follows ). I think technology is playing a large role in this. When video first came in, it allowed people who previously didn't have access to film equipment to produce their own work for much less money and we saw more productions directed by women and especially queer women. Now with digital video and just how amazing the quality has become in the last five years coupled with the technology to be able to fund, host and distribute your own work, the combination is creating an explosion of new producers. These Independent producers get to call the shots on who is hired, what their scripts can be about, what sex acts happen and so on. There's a lot more freedom. So what I'm seeing is lots of projects headed by trans folks, gender queers, and other less-represented sexualities talking about sex through their own stories.

When's the last time you saw a beautiful, well-shot film starring queer people of color (with diverse bodies and abilities) being portrayed as intelligent, complex characters with healthy sex lives -- in a movie where they actually fuck?

Producers often dismiss diverse bodies as 'unmarketable,' so if we want to watch it, we have to do it ourselves. We can use advancements in technology to produce high-quality film independently, and flip the process by letting the consumer be the producer. Now it's just a matter of finding folks who want to help us do it. 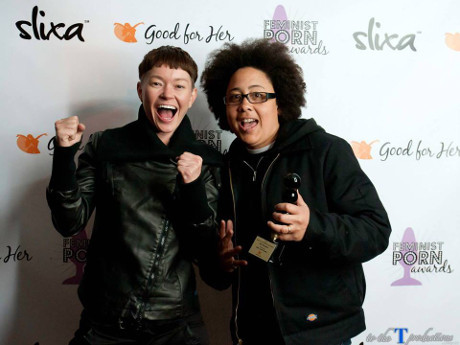 I think we'll get projects that are more earnest and heartfelt and speak to greater commonalities in our collective experiences with sex and sexuality. Because of the restrictive guidelines a lot of companies have which are based on 'what sells' there are a lot of projects that would never fly in that setting. With crowd funding, now there's another option to get your project off the ground. This is happening in lots of industries, not just adult.

Gearing up for this kind of campaign can be pretty intense - what has it been like for you?

It's non-stop. I'm on twitter and Facebook as much as I can possible be in a day. Then I'm constantly checking the campaign to see if we've had any movement. It's a hamster wheel. I really hope it works out because I've been working on this project for about 4 years and everything from cast, crew and locations is in place. We just need funding.

Did you have some help putting the campaign together?

Special thanks to Pink & White Productions for the pictures and video.