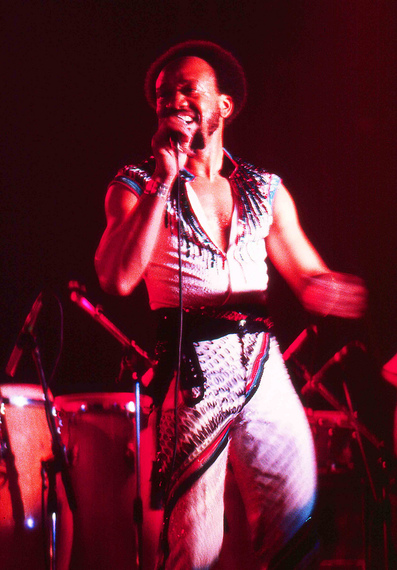 Maurice White performing with Earth, Wind, and Fire at the Ahoy Rotterdam; 1982

My mother worked with Maurice White's father, Verdine, a doctor at a hospital in Chicago. And whenever she heard Earth, Wind and Fire, the incredible band he founded in the 70s, she grinned like he was her baby boy, too.

I never met White. Even as a rock critic, somehow, I never managed to cross paths with him or his amazing band. But I danced myself half to death on their music for decades, as many of us have. In fact, they seemed to be at one of our casinos here in Tucson at least once or twice a year until very recently. And they packed 'em in, all ages, all thrilled to bask in that "Boogie Wonderland" of yesteryear with the best ambassadors from that era, ever.

The uplifting lyrics and infectious grooves still have a magical effect. You've seen it. An Earth, Wind and Fire hit comes on in the supermarket or wherever you are, and heads start to bob, people who never dance start to tap a toe, wriggle a bit.

One song, "Devotion," contained four opening lines that never failed to move me, and that I wish all teachers could listen to every morning as they're getting ready to hit the front lines. They're not quite as stirring just written out as they are when sung by the band, but the sentiment is still sweet and stirring:

Through devotion, blessed are the children
Praise the teacher, that brings true love to many
your devotion, opens all life's treasures
and deliverance, from the fruits of evil.

They knew how to move us, body and soul. Who can forget Phillip Bailey's silky falsetto and ear splitting squeals? And that brilliant horn section with its rapid fire riffs--how many people borrowed, or borrowed from, it?

Look, let's not talk about it. The best way to remember Maurice is to listen to him. And one of my favorite performances was on the old "Live By Request" show for which Mark McEwen was the ever genial host--go watch the David Bowie one, too, while you're at it. Another stellar performance by a musician we grew up with who just left us 'way too soon.

I couldn't find the complete show for you--the one full show is on YouTube but can't be embedded. But the most exciting 45 minutes of it were available thanks to a French gentleman who calls himself "Goofy." Thanks, Goofy, for taking me back to the real good old days.

Maurice White was already too weakened by illness to join the band for the show, but he surprises them by calling in to make a request of his own. So as one of the songs demands, just "Dance!" In joyful remembrance.