The "irreverent" (i.e. replete with obnoxious, casual swearing) website Ship Your Enemies Glitter claims that it'll send "so much glitter in an envelope that [the recipient will] be finding that s*** everywhere for weeks."

The Australia-based company supposedly acts as a middleman in a passive-aggressive assault on anyone the sender hates who hates glitter. It costs about $8 U.S. 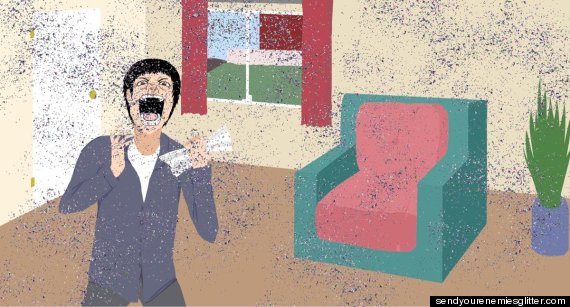 Artist's rendition of glitter-bomb, courtesy of Ship Your Enemies Glitter.

The company claims it's a legit operation. We tried it, and we'll see if it's real.

This wouldn't be the first business to offer to send people bothersome crap in the mail. Some have claimed to send dog poop in the mail, which is illegal in the U.S. if your intent is to harass.

In fact, the off-color card game Cards Against Humanity made kind of a big stink late last year after it truthfully pledged to send "bull****" to customers who bought it.

As for this company's assault vector, all we have to say is that we love glitter because it's fun and totally messy. Which is how we do: