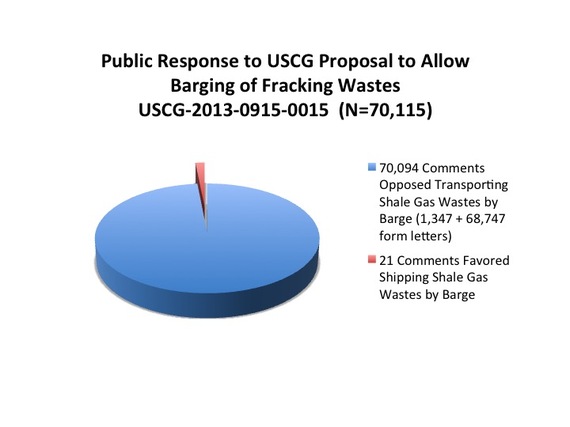 High volume hydraulic fracturing uses million and millions of gallons of water per well to extract natural gas from shale. During shale gas extraction, the water used is exposed to process chemicals plus metals and radon from the earth. GreenHunter is in the business of working with oil and gas drillers to dispose of fracking waste.

Even before the chemical spill in the Elk River, many were concerned about the impact of accidents and spills on drinking water if barging of fracking waste on the Ohio River was allowed. Over 70,000 voiced concern by submitting letters to the dockets opened by the Army Corps of Engineers (COE) and the United States Coast Guard (USCG) respectively.

USCG expected the GreenHunter request to be the first of many to barge fracking wastes. Hence, USCG proposed a policy change in 2013 designed to standardize both the process for barge owners seeking to transport wastes from shale gas extraction as well as the information submitted to USCG. The proposed USCG policy would have included the GreenHunter application and would allow expediting future applications.

Public response to the proposals before both COE and USCG was robust and overwhelmingly negative. 70,094 comment letters were sent to USCG opposing transport of fracking wastes by barge; only 21 supported the USCG proposal to allow shipping of fracking wastes by barge. Of the 460 comments COE received, 447 asked COE not to grant the permit to build a barging facility.

In 2014, GreenHunter modified its application to COE seeking permission to build the the barge offloading facility and promised to transport only wastes from traditional vertical oil wells. The revised permit would not allow transport of wastes from shale gas extraction. As such, in 2015, COE granted the modified GreenHunter permit to build the facility.

On February 23, 2016, one year after COE permit was issued, USCG withdrew its proposal. Rather than issue a blanket policy, USCG said it would evaluate requests to barge fracking waste on a case-by-case basis under the existing decades old USCG regulations.

To date, USCG "has not approved the transport of shale gas extraction waste water by GreenHunter or any other shipper."

USCG punted on the need for a policy change. USCG said it would consider instituting a standardized process for transporting fracking wastes in bulk after USCG assessed "whether current regulations are inadequate to handle requests for transport ...and environmental impacts that may be associated" with transport by barge. USCG further stated that the agency would use acquired experience with individual approvals to inform future rulemaking or guidance.

The USCG policy withdrawal has raised many questions: Is USCG approval of barging fracking wastes by GreenHunter imminent? If so, will COE modify its permit to allow the new GreenHunter Ohio River barge facility to include wastes from shale gas extraction?

While the future of barging fracking wastes is far from clear, certain lessons from the administrative process are crystal. The COE and the USCG dockets both indicate that the public has concerns about barging wastes from shale gas extraction.

Public concerns about mechanisms to protect drinking water must be considered by USCG before issuing any permit to barge fracking wastes. Spills and accidents are a predictable problem. Addressing public concern about safeguarding water should not be ignored.