I've been around this world for awhile, and it's pretty hard to leave me speechless. But when I learned about Omer Goldman - well, her story got me.

If you haven't heard the name Omer Goldman yet, have a seat and grab your Kleenex. Her courage, and the courage of the other "Shministim" in Israel is utterly humbling. And amazing. I don't use those words lightly. 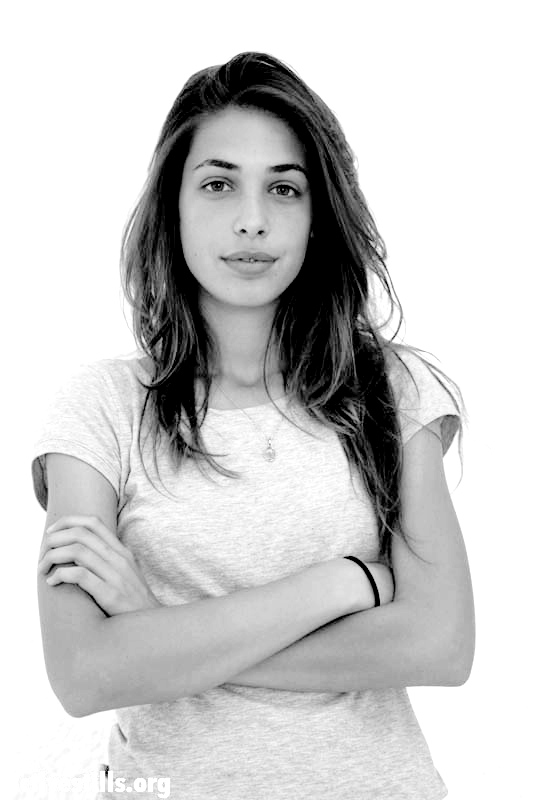 As you can see from the photo, she's young and lovely. 19 years old. She's already served two terms in an Israeli military jail, where she had to wear an American military uniform (a gift to the Israelis) or face solitary confinement. Now, she's out of jail for medical reasons. But as you read this, many of her young friends are in an Israeli prison for refusing to serve in the military there.

This new generation of young Israeli kids is standing up to the government - they call 'em "Shministim." The Shministim- all about ages 17, 18, 19 and in the 12th grade - are taking a stand. They believe in a better, more peaceful future for themselves and for Israelis and Palestinians, and they are refusing to join the Israeli army. They're in jail, holding strong against immense pressure from family, friends and the Israeli government. They need our support and they need it today.

In her own words:

"I first went to prison on September 23 and served 35 days. I am lucky, after 2 times in jail, I got a medical discharge, but I'm the only one. By the time you read this, many of my friends will be in prison too: in for three weeks, out for one, and then back in, over and over, until they are 21. The reason? We refuse to do military service for the Israeli army.

I grew up with the army. My father was deputy head of Mossad and I saw my sister, who is eight years older than me, do her military service. As a young girl, I wanted to be a soldier. The military was such a part of my life that I never even questioned it.

Earlier this year, I went to a peace demonstration in Palestine. I had always been told that the Israeli army was there to defend me, but during that demonstration Israeli soldiers opened fire on me and my friends with rubber bullets and tear-gas grenades. I was shocked and scared. I saw the truth. I saw the reality. I saw for the first time that the most dangerous thing in Palestine is the Israeli soldiers, the very people who are supposed to be on my side.

When I came back to Israel, I knew I had changed. And so, I have joined with a number of other young people who are refusing to serve - they call us the Shministim. On December 18th, we are holding a Day of Action in Israel, and we are determined to show Israelis and the world that there is wide support for stopping a culture of war. Will you join us? Please, just sign a letter. That's all it takes."

So, there you go. Omer Goldman. Now that you've met her, I'll bet you won't forget her. Better yet, damn it, do something for her, for the Shministim, for peace. Jewish Voice for Peace is the U.S. group heading things up for them. Here's the link.

One more thing - I know that this can be a tough subject for many of us Jews. But, I find it hard to believe than anyone can look Omer in the eye and tell her that she has to risk her life and her future for Israel whether she wants to or not. It's just not right. Especially during this time of year, when many of us are getting ready to celebrate a holiday about freedom- well, take a good long look at that photo. You're celebrating her.

Thanks for reading and send your letter here.