Social Security Works has assembled a set of slides that illustrate the Democratic Party's striking decline in voter opinion on the issue of Social Security. They're all worth seeing, but one of them especially demands attention: 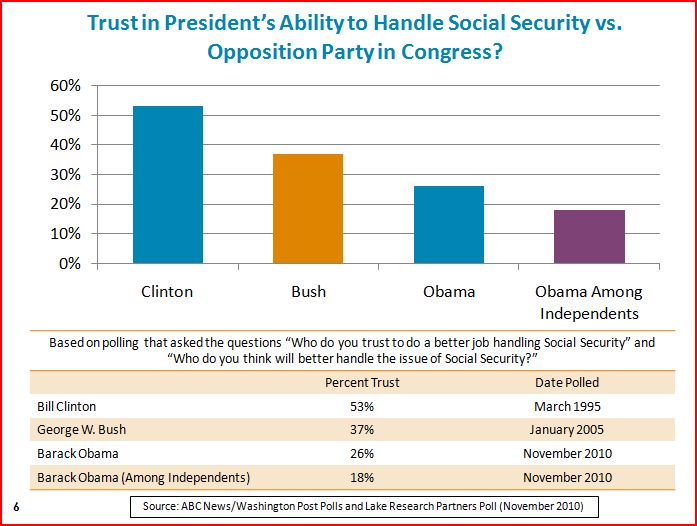 When asked whether they trust the president or his opponents in Congress more on the issue of Social Security, people have less trust in Barack Obama than they did in George W. Bush when he had Obama's job. And the question was asked about Bush in 2005, at a time when his unpopular campaign to privatize Social Security was reaching its crescendo.

That's a stunning statistic. The Democratic Party created Social Security and was seen as its champion for three-quarters of a century. Yet voters have less trust in a Democratic president on this issue than they did for one who had pledged to privatize the entire system, and whose party opposed it from the beginning. And the difference isn't minor. 37 percent trusted Bush more than the opposition Democrats in 2005, which was considered a low number at the time. Yet only 26 percent trust Obama over the Republicans, even after their failed attempt to privatize the program -- and even though Democrats have a "brand identification" with Social Security.

The Republican privatization attempt was thought to have contributed significantly to that party's Congressional losses in 2006. Yet the president refuses to say that he won't cut Social Security, and he continues to have kind words for the reckless, inhumane, and unneeded proposals of his Deficit Commission co-chairs (the Commission was unable to agree to a plan).

In this climate, with these numbers, any attempt by the president to cut Social Security could only be described in one phrase: Political malpractice. Is that where he's headed? Or will he surprise us all by delivering a stirring, unequivocal defense of Social Security? After all the suspense and fear over this issue, that would be a political moment for the ages.

But if he's going to have a change of heart, he better act fast. The damage is already considerable. As Social Security Works explains, the 20-point advantage Democrats had on this issue for the last 15 years has evaporated, and trust in President Obama is roughly half of what it was for President Clinton on the same issue. Obama's performance is even worse among those much-sought-after independent voters. Only 18 percent of them trust him on this issue.

Other critical groups are sinking too. Democrats won seniors by seven points in 1996 and lost them by 21 percentage points in 2010. As Social Security Works writes:

The public's preferred solution? "Bipartisan majorities support scrapping the payroll tax cap set at $106,800. They are comfortable requiring employers and employees to pay taxes on wages above that level."

Dan Froomkin reported on other poll findings in a piece entitled "Obama's Social Security Talk Is Turning Voters Off, Pollsters Say." It will turn them off even more in 2012, when Republicans spend millions reminding voters that the president broke his own unequivocal campaign pledge not to raise the retirement age or cut cost-of-living benefits. ("Let me be clear," said candidate Obama. "I will not do either.")

Why is this even an open question? Somehow, ideas that are widely rejected by the American public remain popular inside the Beltway Bubble. These ideas are usually mislabeled as "centrist" and "pragmatic" to give them mileage with credulous policymakers and journalists. (How can ideas be "centrist" when they're opposed by Democrats, Republicans, and independents by 70 percent to 80 percent overall? And how can they be be "practical" when the program's Chief Actuary under Ronald Reagan says they're not necessary or appropriate, and that lifting the payroll cap is a better approach?)

The latest attempt to push Social Security cuts tries to claim that these cuts aren't just "centrist" -- they're progressive, too. It's an intellectually dishonest work that wouldn't deserve attention if Obama's new chief of staff, JPMorgan executive Bill Daley, hadn't been a Board of Trustees member for the organization that authored it. Daniel Marans deconstructed it, so we won't repeat his work here. If anything he was too kind. (On the other hand, I did think that organization's suggestion that members of both parties sit together for the State of the Union was pretty sweet.)

It would be comforting to be able to say that this is all a misunderstanding and that the president will keep his promise to defend Social Security. But we can't do that. His silence about Social Security, especially after Harry Reid's stemwinding defense of the program, is disturbing. Reid and other members of the Senate and House are on the front line, and any attempt by Obama to triangulate and propose "bipartisan" cuts will devastate them. That's why there are reports like The Hill's of a strategic split between the president and Democrats in Congress: They're afraid he's going to sell them out for a personality-driven reelection campaign that suits his needs, not his party's or the country's. 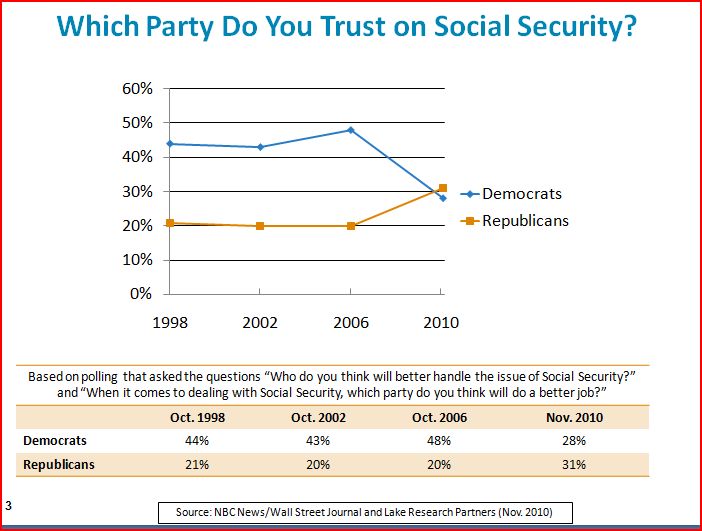 Democrats in the House and Senate are likely to be swept out of office if a Democratic president proposes cutting Social Security. Republicans will run a replay of their successful 2010 campaign, when they spent $71.1 million on ads claiming they were defending Medicare (a program they've always opposed) from Democrats. And as the first figure shows, a "centrist" strategy to cut Social Security won't help the president either. It's a lose-lose-lose strategy: for the president, his party, and the American people.

But we can't do that. Only he can. And he hasn't done it yet.

There's still time. The president can use his State of the Union speech to tell the American public, as clearly and forcefully as he did on the campaign trail, that he'll defend Social Security and oppose any cuts in benefits. That would be brilliant political theater. All the suspense and uncertainty would only amplify the effect if he rocked the public with a ringing, unequivocal affirmation of his support for Social Security.

The president can start rebuilding the public's trust, or he can continue to lose it. On the issue of Social Security, there is no other choice.

(UPDATE: There's yet another poll showing the public's strong support for Social Security, but this one has a new twist. As we summarized here, "Americans would rather reduce military spending than cut Social Security.")