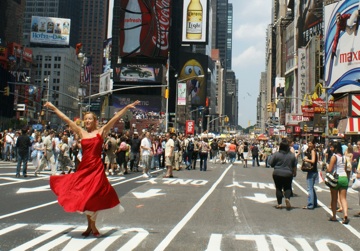 A woman In a red dress stands in the middle of the street and pirouettes. 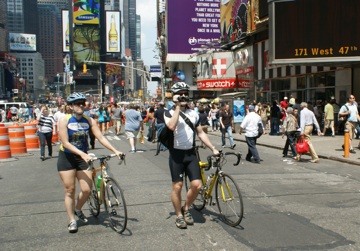 Two bicycles walk down Broadway. Not a car in sight. 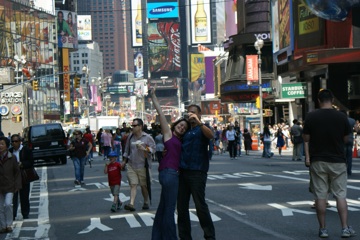 Lanes of pavement... But just pedestrians, a "V" in the air for Victory!

It's not a dream. It's post-automotive Times Square. A story that begins today.

New York's relationship with cars is a strange one.

On one hand, you can easily imagine not ever needing a car in the city. There's the combination of two major train stations, a remarkable underground subway system, buses, taxis, pedicabs, horses, and -- of course -- bicycles.

Car services. Limos. Fleets of chauffeur driven cars. And private cars that stream in by the thousands from every bridge and tunnel.

New Yorkers...drive. Aggressive, car-horn-blaring, brake-stomping drivers who are just as likely to use their car as a battering ram as they are a transportation device. Don't get me wrong, they won't run you over on purpose but they may nudge out into the pedestrian intersection before the light turns, or blow through a walk sign just to keep the pedestrians from getting too comfortable.

But as GM and Ford are under attack, it seems that New York's driving culture is being challenged as well.

Late last night, while New Yorkers slept, an army of workers and contractors descended on the heart of the city and began to put up barricades, beginning to create the largest swatch of pedestrian space that has been carved out since perhaps Central Park was created.

The battleground is Times Square. And while it may seem that the winners are pedestrians, that's merely a by-product of the wholesale face lift of Broadway from 47th to 42nd. The real winners are cyclist, who find themselves with an unlikely ally in Janette Sadik-Khan, the City's Transportation Commissioner.

New York's Battle of the Bikes goes back to a bunch of hard charging bike activists known as Critical Mass, who've been gathering to ride en-mass throughout city streets around the world to demonstrate in favor of more bike-friendly urban environments.

Now, being a bike activist may not seem like the kind of thing to get all up in arms about -- but the fact of the matter is that a city like New York doesn't change unless there's both a reason and a constituency fighting for change.

So over the past few months New Yorkers have started to notice a new carving up of precious city public space, a narrowing of lanes first on 9th Avenue, and then elsewhere. The addition of new bike lanes like the ones already along the West Side Highway. It seems the activists are winning and bikes are becoming a recognized piece of of the urban transportation-scape, a victory that can be claimed in equal parts by environmentalists, cycling advocates, and non-car owning city dwellers.

Perhaps you know best that something is really going on when the New York Post writes, "Alas, bikes are 'green,' so the eco-conscious Mayor Mike is doing his best to re-sculpt the city for their convenience" and hints that Bloomberg is giving in to "wannabe anarchists of Critical Mass."

Today, for the first time, a full stretch of Broadway is now a pedestrian-only zone. Billed as an experiment, the change in New York's most congested (and most visited) real estate is more than a minor change in traffic patterns. It is an acknowledgment that the car culture that has gripped both the city and the country may in fact be, for the first time in half a century, beginning to retreat.

If the changes in New York succeed, one can imagine both a changed city and a change of thinking around the need for, and rights of, users of public space.

Here's the NY Magazine rendition of what Times Square will look like once the transition is complete. 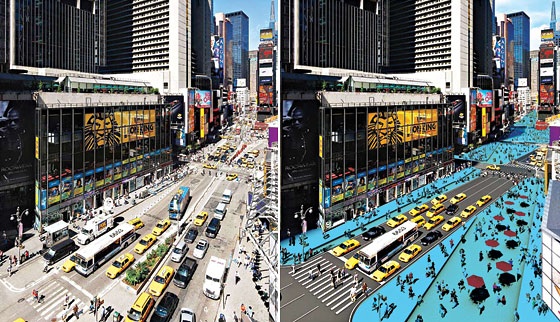 The changes to the cityscape are indelible and important. The shift to a post-automotive city is likely to accelerate as the forces of the economy, environment, and lifestyle all pressure the city to re-invent itself. And bicycles, already a major urban force in some of the most livable cities in the world, are sure to be an increasingly significant force both in the streets and the politics of the City. 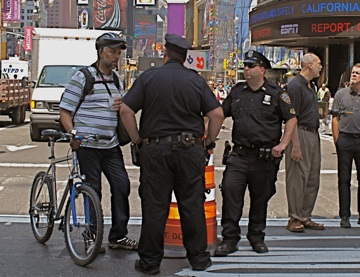