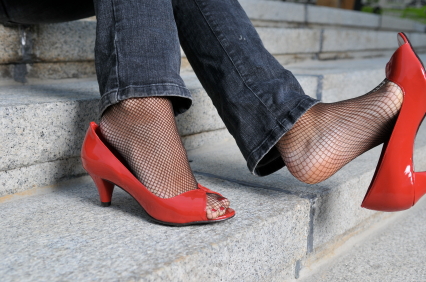 I admit to feeling uncomfortable when asked to remove my shoes as I enter someone's home. The awkwardness is especially true if I am wearing stockings, as I feel exposed, as if my underwear is showing, and on edge because I am quite sure that the stockings will most likely get a few snags.

If the home is Buddhist, or more culturally oriented towards taking shoes off at the door, I feel differently, as in such cultures removing shoes is a mark of respect. But when being asked to take off ones shoes is not a culturally ingrained, the request often feels off-putting to me.

Mud-room practices aside (we all expect to take wet, muddy, or snowy boots off at the door), I don't ask others to take their shoes off when they enter my home. Asking feels like an imposition, almost a demand for a level of intimacy (or adherence to fastidious cleaning habits) regardless of who they are or why they are visiting. And some don't like to show their feet. My mother, for example, had severe arthritis in her toes and was embarrassed about how they looked. She would have been mortified to take off her shoes in public.

What is your response to being asked to take your shoes off when you visit someone's home? Do you ask people to do this?

Many of us, like me, have complex and confusing emotional responses to this issue that have nothing to do with -- nor do they translate to accommodate -- the real and best reasons behind removing shoes at the door: to maintain the health of the home.

In the 15th century one was not allowed to enter a room without taking off shoes in Holland. One can only imagine the human and animal sewage that one would walk through out in the world at that time, so removing shoes would be a precaution against illness-causing bacteria.

As municipal sewage systems took hold and animal transportation gave way to cars and trains, the health reasons behind removing shoes fell away. But new studies show that while we may no longer be tracking in as much bacteria on our shoes, we are tracking in dangerous pollutants. It may be time to return to the practices of the 15th century to protect the health of our homes. Here are some examples:

•In a new study, and the largest ever conducted, 22 pesticides were commonly found in the dust of homes in Salinas, California. Salinas is an agricultural community, but not all the pesticides found were agricultural pesticides. The Environmental Protection Agency and National Institute of Environmental Health have found that low level chronic pesticide exposure as found in these homes can cause numerous health problems, especially for fetuses and young children. The study was by the California state Department of Public Health and researchers with the Center for the Health Assessment of Mothers and Children of Salinas (CHAMACOS) with the University of California, Berkeley. Protection Agency.

• Another new study published in the journal of Environmental Science & Technology, found that toxic coal tar, a known carcinogen used in driveway sealants (among other places), is tracked into homes from driveways and parking lots.

•Lead is commonly tracked into homes on shoes. Lead was removed from paint by law after 1978, and from gasoline in 1996. Lead is still remarkably prevalent, and should be removed from the environment, especially for children. Even low levels of lead can cause a reduction in IQ. Elevated levels of lead in blood range from behavior disorders and anemia to mental retardation and permanent nerve damage. Other heavy metals, such as mercury, can also be tracked in on shoes.

•Taking shoes off at the door is especially important if you have carpets. Carpets are a sink hole for toxins of all kinds that are brought into the home on shoes and boots, including pollens, lead, pesticides, and more. The cumulative levels of chemicals can become quite significant given that it is hard to clean carpets frequently and well enough, to remove the pollution buildup.

•Infants and young children spend a great deal of time on the floor, and due to their size they are closer to the floor, and also put toys that have been on the floor into their mouths. With their growing central nervous systems and developing immune systems, toxic chemicals can be especially damaging.

•Pets are vulnerable to exposure because they commonly lie on the floor or carpet.

How do we ameliorate the emotional tangles around removing shoes at the door? How make it a practice that becomes a comfortable part of modern culture? Some solutions to make the practice more relaxed could include:

•Having a specific place to take off and place shoes;

•Having an array of clean house slippers in various sizes available for guests;

•Installing a steel, or tough fiber, shoe scraping doormat at the entrance way. People can be encouraged to use these mats for their shoes if you don't have a house rule about removing shoes;

•Heralding the environmental friendliness of how less dirt tracked into the home on shoes requires fewer cleaning products and the perk of less time cleaning;

•Seeing removing shoes at the door as a point of welcome, a transitional moment to recognize that you are entering a new atmosphere, even a sanctuary.

Other ideas? How to announce to your guests that you have such a policy without alienating them?