I've been critical of Scandal, one of my favorite shows, when it's sometimes seemed to go off the rails, but this past week night Shonda Rhimes did some powerful cultural work.

Many episodes ago, Cyrus Beene, White House Chief of Staff, got caught in a relationship with a male escort, Michael, who was being used against him in another one of Scandal's byzantine plots. Olivia Pope, brilliant fixer, helped shut it all down. The blackmailer was defanged and Michael was publicly presented as Cyrus's loving fiance. 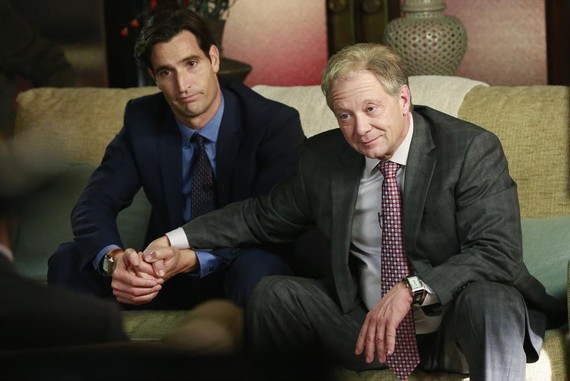 Avoiding more scandal last night and killing a whole flock of birds with one PR stone, Olivia arranged to have Mellie, The First Lady, soon to run for Senate, host a White House wedding for Cyrus and Michael. Chaos, plotting, potential disaster, and raging homophobia ensued.

Through most of the show, Cyrus looked like some weary aristocrat in a tumbrel being led to Madame Gullotine, and his past failed marriages swept over him in flashbacks like a tide filled with medical waste.

But right near the end of the show, just before the wedding, Michael opened up and talked about how lonely and mocked he'd been growing up, and how all he'd wanted was to feel important to someone. Scandal episodes are filled with characters who practically burst forth in arias of rage or need or envy (last night Mellie let fly). This was a soft, solemn elegy--and deeply moving, because who doesn't want what Michael does?

Lev Raphael's 25th book is the novel of suspense about out-of-control cops Assault With a Deadly Lie. You can explore his other books on Amazon here.