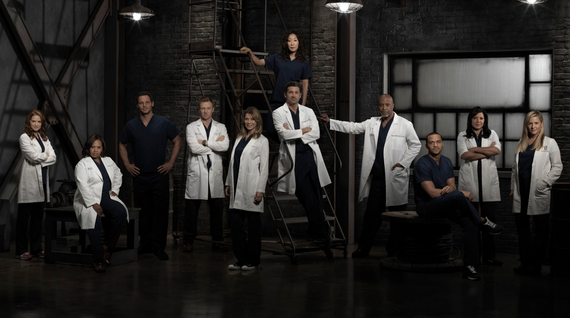 I'm currently positioned at a table in my university's hospital cafeteria, where I am able to see both the entryway of doctors who enter upon break -- some even donning periwinkle scrubs -- and a line of anxiously-awaiting college students at the adjacent Starbucks that I just recently exited. What I've happen to discover is that oddly-enough in less than a week, a similar occurrence will happen on a Thursday, on ABC, and all created from the ambitious imagination of one individual.

Her name alone elicits the kind of prestigious, yet thrilling notion that John Gresham or Dick Wolf would have in the mid-nineties. But this time around -- at least for myself -- she's a powerhouse of inspiration and childhood nostalgia that I could've never imagined looking up to in all of my 19 years of being a straight American male. With multifaceted mega-TV properties including the likes of Scandal, Grey's Anatomy, plus new entry How to Get Away with Murder, Shonda Rhimes has not only proven her legendary status in Hollywood (trust that people will be streaming and tweeting Mere Grey monologues for generations to come), but she's revolutionized an entire culture.

You see, before Shonda Rhimes and her unprecedented Shondaland exports, the ambitious 'minority' was vastly underrepresented. And being just nineteen years old, I can honestly say that within the past decade of maturing from "toddler" to "college-aged twentysomething", there wasn't a single television mainstay that represented an ambitiously diverse cast of color with the complexities that are Jackson Avery, Miranda Bailey, and Cristina Yang. And not only ethnic and far from stereotypical primetime appeal, but apparent in nature as well-being optimistically fleeting, dramatically unaware of what they want from the future, and functionally insecure. This, my friends, describes the characteristics of an entire generation of millennials that I am happily apart of. And knowing Shonda Rhimes' inspirational backstory, it applies to her as well.

The woman writes what she knows.

But after compulsively re-streaming her incredibly uplifting commencement speech to the 2014 Dartmouth grads this past summer, I knew that Ms. Rhimes was inspiration gold. In her speech, she speaks about how being dormant and dreaming is not at all an efficient way of living. In fact, the presentation of her advice was humanizing, truthful, and down-right honest. She explains, "I think a lot of people dream. And while they are busy dreaming, the really happy people, the really successful people, the really interesting, engaged, powerful people, are busy doing." She continued by articulating that, "Dreams are lovely. But they are just dreams. Fleeting, ephemeral, pretty. But dreams do not come true just because you dream them. It's hard work that makes things happen. It's hard work that creates change."

"Ditch the dream and be a doer, not a dreamer."

Never, ever has a commencement speech hit me like the one that she gave at that Old Pine lectern. Perhaps it was her bleak and effective pessimism that trigged such an intensely arresting reaction. And it's not even that I'm much of a dreamer in the Shonda Rhimes context; I hope to write, act, and politicize for a living and - for the most part - have been able to do so in my college career. But amongst deeper reflection, I understand that the appeal essentially lied in the fact that she actually does rule Thursday nights of television.

They're far from fabricated words of wisdom that she's spoken of because it can simply be proven by showing anyone a Thursday night lineup in a fall issue of the TV Guide. She's created this powerful empire that anyone would want to have (or work for). But surprisingly enough, the Shonda Rhimes that we know today wasn't always planned. She confessed that she once dreamed of becoming Pulitzer-Prize winning author, Toni Morrison. But after that dream wasn't realized, she didn't waste anytime belaboring or wishing for an alternative to miraculously manifest itself. No. She did what she has advised others by saying, "My dreams did not come true. But I worked really hard. And I ended up building an empire out of my imagination. So my dreams can suck it."

This is the Shonda Rhimes we know today -- daring, bold, and linguistically adventurous as evident in her material. From the John Doe is George! moment on Grey's to when Jake Ballard shot James on Scandal -- she's facilitated a brand that keeps audiences guessing decade after decade. And wanting more because yet again this fall, she'll delved into a new and exciting territory. A territory that is oh-too familiar to my friends and I. And a topic that every foreboding twentysomething has been wanting to see boldly taken on by Shondaland for years.

Based at the fictitious Middleton Law School, Shonda Rhimes' latest entry How to Get Away With Murder starring Viola Davis will premiere next week. Familiar to any Shondaland native, the series will deliver the drama, deception, and brilliant writing that we've become accustomed to expect. And although created by Scandal-producer Pete Nowalk, there's no worries for he wrote the controversial "Everything's Coming Up Millie" episode in Scandal's latest season. (As an aside, I'm anticipating for its premiere as my buds can attest to my telling of a reoccurring night dream where I'm on the set of How to Get Away With Murder looking over a script and still searching through my dream's lucidity to see if I have a press pass or SAG card in tow. Hopefully I'll discover that answer soon.)

But as I finish this article on the George Washington University campus, I'm peering out of the window of my Executive Branch Management course overlooking the quad, invigorated by the fact that one day my hard work will be validated. And as of late, I've stopped dreaming of becoming or personifying my greatest inspirations and "gotten busy becoming myself." Besides, I've come to know what I believe because of all that I've written and after diving into interviews upon interviews of Shonda from years past, I feel that I've finally been able to understand her experienced philosophy. The sky's the limit if you take the journey into your own hands. For I'm certain that Shonda Rhimes wouldn't have ever imagined that she would have three hit shows which would inspire so many lives in believing that ambition really isn't a bad thing.

She simply rules the world; especially on Thursdays nights in my dorm since -- like most college students -- I don't have class on Fridays.

Scandal, How to Get Away with Murder, and the eleventh season of Grey's Anatomy premiere on Thursday, Sept. 25 at 8 P.M. on ABC.

Tywan Wade is a Junior at the George Washington University in Washington, DC. Read more about him in Impossible Dreams: The Story of Discovering My Superpowers.