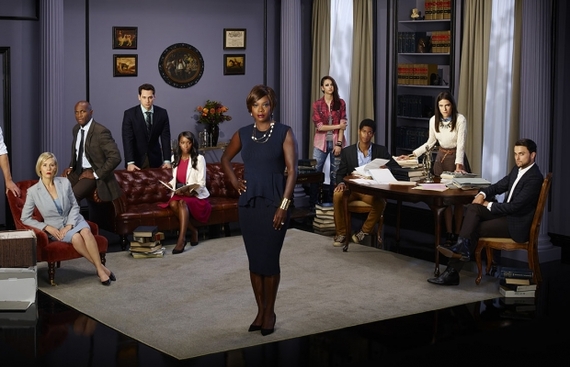 How to Get Away With Murder - Craig Sjodin/ABC

In case you haven't heard, Shonda Rhimes and her team have killed Thursday night's ratings with her creative trifecta of Grey's Anatomy, Scandal, and the new addition, How to Get Away With Murder, on which she serves as executive producer. It appears this woman, who the New York Times served ridiculous ignorance and insensitivity by declaring her an angry black woman, has much to celebrate!

Let's look at the numbers, shall we? According to The Hollywood Reporter, those three shows have given ABC its highest-rated Thursday night in five years, particularly in the coveted 18- to 49-year-old demographic. Not only did How to Get Away With Murder do better than both Grey's and Scandal, it also broke a DVR viewership record. In the three days after airing, the show gained 6 million viewings in DVR ratings. To clarify, this is huge. In comparison, hits like The Big Bang Theory garnered about 18 million in their premiere, while the second season premiere of NBC's hit The Blacklist had 12.5 million viewers. A look at last week's premiere of Survivor on CBS earned 9.7 million viewers in the 18-to-49 age bracket.

The NY Times' tone deaf piece missed the significance of what this could be for an African-American female show runner who carved out quite a groundbreaking relationship with a network on all accounts. However, let me be clear: This is historic, not just because she is a woman, not just because she is black, and not just because she is Shonda Rhimes; this is unprecedented for anyone and has never been done in television before on this scale. On the Sundance TV show The Writers' Room, hosted by writer and actor Jim Rash, Ms. Rhimes discusses last season of Scandal, and retold how grateful she and her writers are for what she created and the trust that she gets from the network to write without influence or notes from ABC steering her creative direction. She earned that respect and trust. She fascinatingly got into writing and television seemingly on a whim.

In another NY Times piece, back in 2013, she mentioned that she randomly read how hard it was to get into the University of Southern California's film school: "After graduating from Dartmouth, she read an article in The Times that said getting into U.S.C. film school was harder than getting into Harvard Law and thought, this sounds like a really competitive thing to do. I'm going to do it." She applied, and she got in. Then after writing screenplays for such films as Crossroads (yeah, that one starring Britney Spears and Zoe Saldana), The Princess Diaries 2, and Introducing Dorothy Dandridge, starring Halle Berry, she accepted another challenge -- motherhood. As parenting does, it caused her perspective to change as she ended up watching more television while awake with her kid who wouldn't sleep. The article goes on to explain how she transitioned to writing for TV through that experience, and that's when Grey's Anatomy happened.

It would appear with Ms. Rhimes's awesomeness and writing prowess, she took the controversy in stride. She is quite the opposite of an angry black woman, as she shows no signs to stop being the television juggernaut that she has become, accomplishing something that few have ever done before in television. She is hardly angry, while laughing all the way to the bank. So that, folks, is how you get away with murdering television, and I'm sure Shonda, nor anyone at ABC is angry about that one bit. So tune into Thursday nights, because I guarantee among Grey's, Scandal, and now How to Get Away With Murder, there's something for everyone to like! According to the ratings and the chatter on Twitter, you won't be alone, nor do you want to be left out.

Doctor, writer, and world traveler; lover of politics, movies, and advocacy through storytelling.