Journalist R.G. Belsky's background includes being metropolitan editor for The New York Post, deputy national editor and metropolitan editor for The New York Daily News, news editor at Star Magazine, and, most recently, managing news editor at NBCNews.com. One can understand why and how he comes by the fertile imagination and great storytelling he possesses in the Gil Malloy series, the most recent of which is Shooting for the Stars (Atria Books).

Gil Malloy, the living embodiment of a hard-driving newspaper reporter who's been through it all, broke onto the crime fiction scene last year in The Kennedy Connection, where Malloy connected the dots between the assassination of President Kennedy to a modern crime spree. Malloy proved to be a character to be reckoned with, the kind of dogged newshound that, more's the pity, rarely seems to exist any more due to the changing landscape of print media.

The Kennedy Connection was a cleverly written, suspenseful page turner in the best sense and Shooting for the Stars is its' worthy successor. In this saga, Malloy is thrown into the sleazy, headline-grabbing world of a prime-time TV newsmagazine when he joins forces with a beautiful reporter who has uncovered answers long buried that lead to the solving of a cold case from decades before. The victim, Laura Marlowe, was America's sweetheart, a beautiful starlet who made but a few films, but whose legend looms very large and has become a merchandising boon for the keepers of the flame, her widower and her mother. 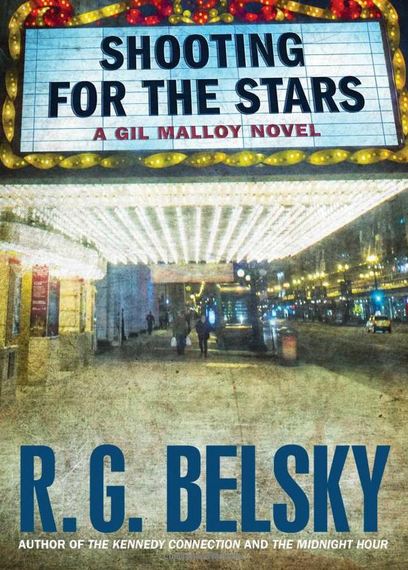 As before, Belsky's prose is sinewy, compelling, and addictive as he reels the reader in a chapter at a time until one literally can't stop reading until sleuthing out whodunnit. This is where Belsky's newspaper background shines from his many years of chasing stories in the naked city. His genius is evident in the way he compares and contrasts the atmosphere of a classic newsroom to that of the shiny new digital variety.

Malloy, the elder statesman newsman, is the other side of the coin to the young and eager editor who is all about the tabloid-y approach to attract more eyeballs to the paper's website. There is a brilliant scene whereby the editor has Malloy do a live webcast about a popular page one story he's broken, praising him for having tears in his eyes. Her attitude sums up new and old journalism in one fell swoop. Real emotion? Exploit it!

Again, we're hanging on for the ride, hardly able to put the book down so we can follow the hairpin twists and turns that lead us, eventually, to the answer behind Laura Marlowe's untimely death. Belsky has scored another home run with Gil Malloy's newest adventure in the seamy underbelly of American crime.