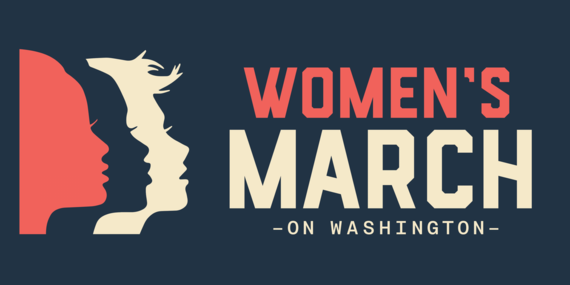 Three hours behind the East Coast, I woke in the morning and took to the Internet in search of coverage. The first people I saw: Nona Hendryx joining Toshi Reagon (daughter of the iconic Sweet Honey in the Rock founder Bernice Johnson Reagon) and her band, BIGLovely, followed shortly thereafter by friend and executive director of the Astraea Lesbian Foundation for Justice J. Bob Alotta, doing what she has done for as long as I've known her: speak truth to power as a queer woman and stand strong for the pivotal word of the day, representation. 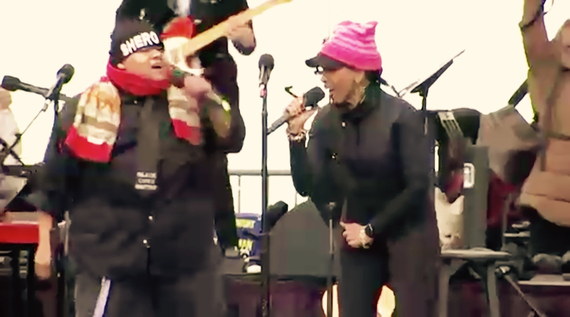 Toshi Reagon and Nona Hendryx at the Women's March on Washington

I kept watching, through all the WiFi disruptions and my stomach informing me it was time for breakfast. Saturday was going to be a day for the ages, but on a much more prosaic level, what it also meant was my weekly shot of testosterone. I thought, wow, is today really the day to do this, a day filled with Women's Marches and acres of estrogen around the world? Then I thought, yeah, today is exactly the day because in doing so, I acknowledge not only that I control my own body but that I stand with my sisters' right to do so as well. Today is exactly the day to do this because we need more men to call themselves feminists, because men of the world, we need to do better for the women in our lives...and for the women who aren't in our lives, for the women who voted for Trump and those who voted for Hillary and even for women who didn't vote at all, though I hope we can all agree that voting is crucial to a functioning democracy.

One man who understands just how much empowered women boost the quality of life for all of us is Mr. Van Jones. After hearing him say that opponents had bashed the idea of the #LoveArmy he began building last year, I had to see for myself what made the idea so terrifying. Was it their suggested resolutions: to stand with the most vulnerable? listen with empathy and expect to learn? or act out of love, not fear or hate? To me, energy spent hating on love is about as useful as a screen door on a submarine because the truth is, if we can't find a way to love each other, we're all going down together.

Love Trumps Hate, the Hillary Clinton campaign slogan, is in fact a call to action. Especially now, believing in the transformative power of love requires us to work through these miles of anger, frustration and disappointment armed with nothing more than compassion. It doesn't tell us not to have anger, frustration, or disappointment, but it does call on all of us to turn those feelings around without harming others. As a man, that's another way to stand up for women and a teachable moment for our sons and brothers to learn respect for the other 50% of the human race. 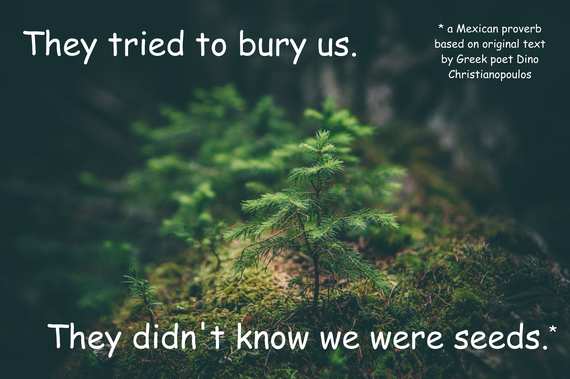 People have said to me--and probably to you--just give him a chance, but I'm here to report that peaceful protest and resistance to hateful rhetoric don't mean we aren't giving Trump a chance. They mean we're holding him accountable as a civil servant; so I say, give democracy a chance and remember, Donald, that you now lead a country by the people, for the people. What makes us truly great in America is not an assimilation of kind or mind but the ability to assimilate our diverse needs into workable solutions within a government that shouldn't get to pick and choose who it's going to represent.

When I travel abroad using my newly gender-accurate US passport, I owe it to an administration that made sure I could do so. I also owe it to my LGBTQ sisters and brothers who fought for legal protection because we don't get to take for granted that we have the ear of the civil servants who make policies and change laws. We understand that although we all deserve a voice in D.C., we have to work--and work together--to have that voice heard.

Because here is something I don't understand, not even from this eponymous perspective: why isn't "white male" considered an "identity" in politics, and why is it a national tragedy when some people feel forgotten but not others?

I have to wonder if the Trump voters who felt neglected realize that the reason "people like us" get any attention from politicians is that our forebears inconvenienced themselves for justice. When we feel forgotten, we organize. We make phone calls and stand in the rain at rallies and run for office and create national organizations and movements and love armies and remember the words of the poet, Audre Lorde: Your silence will not protect you...And we have done this not just during an election cycle but all year, every year, for decades. 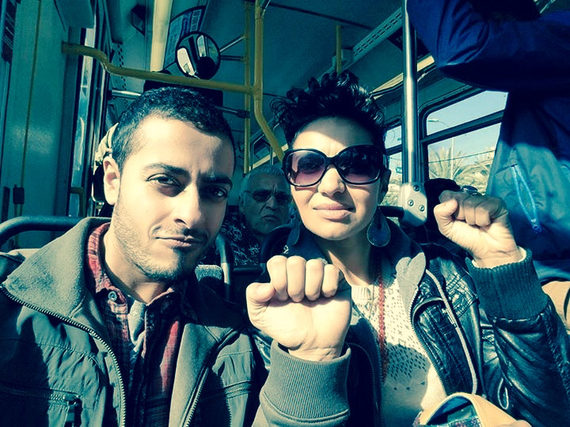 Yes we can learn from each other, of that I am convinced, but don't tell me that giving Trump a chance means not taking radical action. In fact, it means the opposite. It means caring enough about the fate of this country that we are willing to take time out of our lives to fight for the attention of politicians, attention that too many people who voted for Trump must feel is their--and only their--due. Maybe if you've never had to fight for your rights, you can't see that asking for equal treatment under the law doesn't take anything away from you. What we are trying to do is add: to the conversation, to the community, and to the promise and the soul of this country, which belongs equally to all of us.

I watched Gloria Steinem, Angela Davis, Janet Mock, America Ferrara, Alicia Keys, and so many others who may not be household names but for sure held the entire house's attention in D.C., and each in her own way reminded us of the crucial feminist belief that the personal is political. I know that injecting myself with testosterone won't of itself change the world, but it changes me. It is a personal act of power, of standing up politically with others--today, particularly with women--whose identities are too often used against them: my trans sisters, my lesbian and bisexual sisters, my black and brown sisters, my religious and my atheist sisters, my sisters with disabilities, my elder sisters, in fact all my XX and XY sisters, as well as my actual sister. We all have a part to play, and on this day, a shot of testosterone reminds me of the responsibility I have to be the kind of man who isn't afraid to make the rights of women a priority.

The "T" is Not for Trump