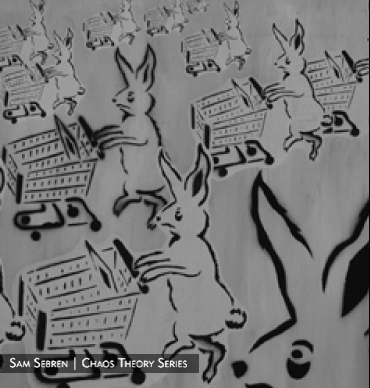 I've tried to put myself in the shoes of the Long Island lemmings who stomped the life out of Jdimytai "Jimbo" Damour in their rampage to ring up a bargain, but I just can't seem to fit into their frenzied footwear. Black Friday -- this travesty of a tradition of dashing out the door to score a discounted TV or DVD player before you've even begun to digest your Thanksgiving dinner -- is a sign of how badly we need to heed the Reverend Billy and seek salvation at the Church of Stop Shopping.

Damour's death was shocking but not surprising. Isn't the whole point of this retail ritual to feed a shopping stampede? Hopped-up Black Friday buy-bunnies pawed their way through the madding crowd at big box brouhahas all over the country this year; the fatal mall mauling on Long Island was just a new nadir for our nation.

Make no mistake -- this was not a tragic accident. According to Newsday, the police were dispatched to the Valley Stream Wal-Mart at 3:10 A.M. -- about two hours before Damour was trampled to death -- to investigate a disturbance. They spent half an hour admonishing the unruly crowd of 500 or so shoppers "to be orderly," and then they left.

By 5 A.M. the crowd had swelled to 2,000 people pushing against the soon-to-open doors with such force that the glass shattered and the doors came off their hinges. "A metal portion of the door frame crumpled like an accordion," Newsday noted, adding that:

Other workers were knocked to the ground as they tried to rescue Damour, and customers simply stepped over him and kept shopping even as the store announced it was closing because of the death, police and witnesses said.

"It was crazy," a worker who witnessed the stampede told the New York Times. "The deals weren't even that good."

Police trying to clear the crime scene were stymied by shoppers who refused to stop shopping even as Damour lay dying, because they'd waited so long for the chance to profit from those special "5-A.M.-to-11-A.M.-only" prices.

So who's to blame for this barbaric episode? It seems pretty clear that both the police and Wal-Mart failed to provide sufficient crowd control, but New York Times media reporter David Carr fingers another faction: the "newspaper writers and television anchors who are now wearily shaking their heads at the collective bankruptcy of our mass consumer culture" -- you know, the ones who cheered it all on as the countdown to Black Friday began.

But what about the frenzied folks who left their sweatshop sneaker track marks on Damour's back? Who created these monsters, these real-life incarnations of George Romero's Dawn of the Dead zombie shoppers? As Wal-Mart warrior Al Norman observed on HuffPo:

The 2,000 or so Wal-Mart shoppers at the Valley Stream store were merely lab rats responding to a stimulus. When the door opened, they went after the cheese.

Reverend Billy mourned Damour the morning after, imagining the horrific last moments of this young man's life before the glass gave way:

I read that there was a Magnavox flat-screen DVD player on sale at the Wal-Mart in Valley Stream, Long Island yesterday, available on Black Friday only, for $147. That is the deal that waits behind Jdimytai Damour. There he stands at the electronic doors, looking out at us. We stand in the darkness, pushing out with our elbows, spying the shiny packages up the aisles. We are a distorted America standing in the pre-dawn darkness. We have turned our Pursuit of Happiness into this desperate feeling. Jdimytai watches us. We push on the glass.

Jdimytai Damour we will slow down! We will stop shopping!

On Sunday's Face The Nation, Bob Schieffer was appalled and baffled by the deadly stampede:

It made me wonder: What were they shopping for? Christmas gifts? They didn't show much Christmas spirit.

When store officials ordered the mob out of the store because someone had died, many called it unfair, because they said they had been waiting hours to shop.

The terrorist attack in India will cause us to redouble our anti-terrorist efforts, and economic recovery plans are already in the works.

But shouldn't the death of that poor sales clerk give us some pause as well?

If we have become a people so self-centered that we are willing to step over a lifeless body to get a bargain, we have problems that go beyond terrorists, a credit crunch and bad mortgages.

Surely we can do better than that.

Yes, we can. But will we? There are 24 days left till Christmas. It's not too late to stop shopping.