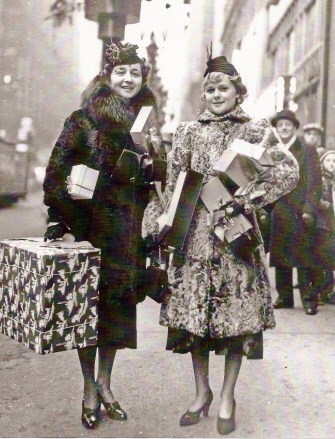 Life in the Boomer Lane has been thinking a lot about friendship, lately, partly because her friends give her so much solace at this particular time. The other reason is that she needs a good laugh, and her friends always provide.

She starts with Barbara, a friend since 1975. Their friendship was rooted in four areas: Their husbands were young economists, working for HUD. They were each at the start of creating their families, which would eventually top out at three children apiece. They were passionate about shopping and making others laugh. They shared body dysmorphia and unhealthy relationships with food. They were either on stringent diets or engaging in out-of-control eating. But it was shopping that LBL will always remember. It was shopping that took LBL and Barbara to the far recesses of mega-malls and of foreign countries. Wherever they went, they left their mark.

Potomac Mills Potomac Mills, a discount mega-mall on the outskirts of the DC area, is famous for attracting more tourists than the monuments and museums of DC. Potomac Mills was a favorite of Barbara and LBL. In the mall, they lifted a shopping cart from a store at one end and rolled it for the breath of the entire mall, bringing it into countless stores and piling it with items that were both wonderful and seriously embarrassing. In one store, they were shrieking so loud as they tried on items of clothing that a woman from another dressing area came into theirs, declaring, "There's a lot more fun going on in this dressing room than in mine." Barbara and LBL welcomed her into their tiny space. The mayhem continued, now with the three of them.

Years later, when Then Husband decided to remarry, Barbara told LBL, "We'll spend his wedding day back at Potomac Mills." And they did. It was a glorious day.

Orchard Street Originally the area of settlement of Eastern European Jewish immigrants in NYC, the Lower East Side eventually traded pushcarts for tiny stores run by Hasidic Jews. All along Orchard Street, the main drag, one could find off price designer clothing, handbags, and shoes, as well as the most astonishing array of cheap key chains and lighters ever produced. Barbara and LBL made two trips a year to Orchard Street. To this day, LBL can do an exact rendition of the little sales women in the dressing rooms who would kvell over whatever anyone tried on (no matter how hideous) and exclaim, "Oy! Dat is be-you-ti-ful on you! Vaht a shtunning look!"

Toronto LBL was determined to get a fur coat. Barbara's brother lived in Toronto. Toronto had a vast discount fur district. These items converged to have the two get on a plane, headed for Toronto. Shortly after they were seated, Barbara whispered to LBL, "Turn around v-e-r-y slowly. Don't make a scene." LBL did so and saw the the row behind them was open space. The seats were gone. On the day before their flight, the big item in the news was that the cargo door of a United flight became disengaged and seats had flown out of a plane, along with the passengers strapped into them. Barbara and LBL spent the remainder of the flight alternating between fits of laughter and terror. They also held on very tightly to their seats, as though that action, alone, would keep the seats in place.

In Toronto, the coat was purchased and the vendor suggested that he give LBL a fake bill of sale at a lower price in order for her to be able to avoid paying a huge customs fee for the coat. As LBL had virtually no experience purchasing luxury goods in other countries (or even in her own), that sounded like a good plan. She accepted.

She stood in the customs line, in sight of the gate. When it was her turn, she readily showed the coat and handed the official the fake sales slip. The customs official glanced briefly at the fake bill and said, "I need the actual bill. This isn't it."

LBL had the real bill in her suitcase. She did a quick calculation, which amounted to retrieving the actual bill and paying the higher fee vs standing firm. She looked at the custom's official square in the eye and declared, "That's all I have."

The customs official countered with, "We have a big problem, here," and looked behind her at another customs official. LBL smiled as pee ran down her leg. By now, several other people were in line behind her. LBL was interrogated right there at the desk, as more people joined the line and the plane waited. The pee continued to trickle out.

At the moment when it was obvious that she was about to be hauled away to another room, missing her flight and spending the rest of her life in a Canadian prison, one of the customs officials noted that the line now had at least twenty surly people in it. Disgusted, she looked at LBL and said, "Go. Take your coat and go." She threw the coat onto the desk. LBL grabbed the coat and ran to the plane.

The end of that story is that she subsequently wore the coat twice, before realizing that she really wasn't a fur coat person. She sold the coat at a consignment store for a small fraction of its actual (as well as fake) cost.

LBL thanks Barbara for decades of shopping, salads with dressing on the side or nachos with extra cheese, laughter, and travel. Together they traveled hundreds of miles and went into dozens of of stores, lost and gained countless pounds, and aways stretched the limits of immaturity. Whatever they bought or consumed is now long gone (except for one really cheap lamp from Potomac Mills), but the sound of their laughter is still ringing in LBL's ears. Hopefully, that is the one item that will never go away.

Shopping And Laughter: The Two Essentials Of Life
7 Ways To Make Friends Post 50