While Cairo has modern suburban malls as glitzy as anything in Houston, and it has its 20th-century attempt at a European-style downtown, I like the dusty, donkey-cart world of the old Islamic city center. Khan el-Khalili, one of the largest markets in the Arab world, is a tourist magnet. And even today -- with almost no tourism -- it still feels touristy.

The market's main drag is a gauntlet of hungry merchants. They drape you with a headdress or a bracelet, and you can't give it back. I'm a sucker for the charming English lines they toss my way with the grace of fly fishermen casting:

"You're breaking my heart."

"How many camels for your woman?"

"Can I sell you something you do not need?"

"No charge for looking."

"Come upstairs where we make things."

"You are back! How can I take your money?" 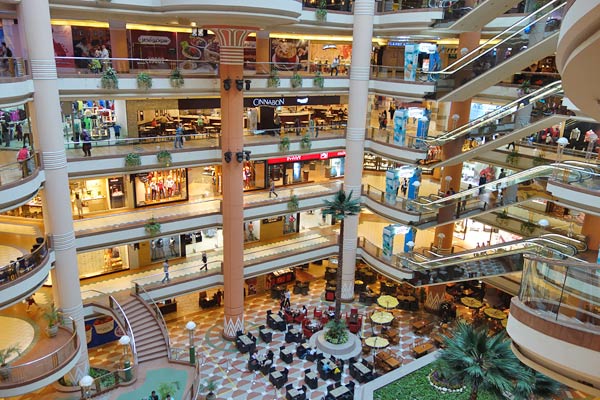 Suburban malls in a city like Cairo give wealthy locals a place to buy their name-brand shirts and pick up a Starbucks. While the unwashed masses jostle for penny loaves of subsidized bread to feed their children, I sip my $4 grande latte. Most locals shopping here manage to create an alternate reality in which there's no desperation.

But Khan el-Khalili is just a springboard for wandering deeper into Islamic Cairo. (That's "Islamic" as opposed to the more European-feeling, French- and British-designed streets that make up the modern downtown.) My favorite areas to explore were along Souk el-Selah street, the "Street of the Tentmakers" (Chareh el-Khiamiah), and the gate named Bab Zuela.

Simply walking down the streets -- dodging families riding motor bikes as if skewered on kebabs, rambling shipping dollies slaloming through browsers, and boys on bikes balancing rustic racks of bread on their heads -- is treacherous. I duck to avoid being scalped by a rack of government-subsidized baladi bread (crispy little wheat balloons of feed-the-poor nutrition). The new government (as governments have done since Louis XVI lost his head to hungry peasants a couple of centuries ago) provides bread to its struggling masses at about a quarter its actual cost -- the equivalent of a penny each.

I spent the last month explaining to friends why I'm traveling to Egypt. I'm here for lots of reasons. While letting my staff carry more of the updating burden with my existing guidebooks, I'm taking this chance to spend some steep learning-curve time in a country I don't know well. At the same time, I'll do some scouting for a TV special I plan to produce in the next year. Also driving this trip is my concern that the American public's fear of traveling here is an overreaction. A firsthand experience will help me knowledgably advise people on Egypt's merits and relative riskiness. One thing is certain: Egypt will be in the news a lot during the coming months. After ten days here, I think I'll better understand the context of whatever the future brings. And finally, I have always liked the people and culture of this nation that's as great as it is misunderstood and underappreciated. 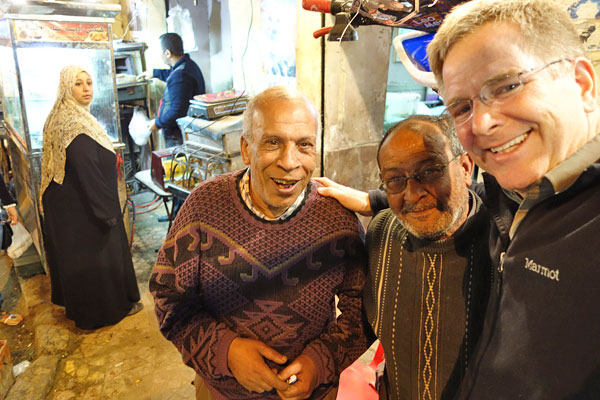 As an American on the streets of Egypt, I received only warm and enthusiastic welcomes.

I'm taking notes constantly for my TV project. For example, thinking about returning with my crew to this particular market street, I noted to film these things: towering stacks of rat traps, motorcycle minibuses (ride one, shoot point-of-view), bread boys on bikes, chiselers engraving grave stones, and the shop making shredded wheat kind of like cotton candy; avoid market streets on Friday and Saturday, when they are too crowded.

People are absolutely everywhere. While we have the refuge of our hotel, many people here have no escape. They seem to be out, in part, because it's just better than being in. Egyptians are good-humored. They don't stare. They're generally friendly to my camera. I sensed absolutely no anti-Americanism. Children everywhere are ready to steal your heart with a warm and gentle smile. 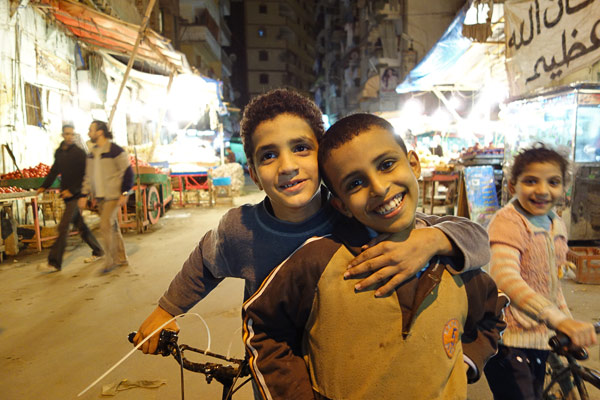