Get ready to finally embrace your short stature, Skee-Lo!

We've long known that short people live longer than the taller among us. Past studies have examined the relationship between height and lifespan of populations around the world, suggesting that shorter people generally live longer lives, while taller people are more likely to have certain illnesses and develop various types of cancer.

Now, thanks to new research published in the journal PLOS ONE, researchers have finally discovered the secret behind shorter people's longevity: It's in their genes.

Using data from a long-term observational study of Japanese-American men in Hawaii, researchers demonstrated that a gene linked to longevity, called FOXO3, is also linked to body size. What's more, researchers found that the shorter a person was, the more likely they were to have a long life.

In one of the world's largest and longest-running studies of aging men, researchers at the University of Hawaii John A. Burns School of Medicine, Kuakini Medical Center and U.S. Veterans Affairs ran an analysis by dividing more than 8,000 subjects into two height groups -- 5'2" and shorter and 5'4" and taller -- and looking at their heights, health and death rates over a 40 year period.

"The folks who were 5'2" and shorter lived the longest," Dr. Bradley Wilcox, a researcher and professor at the UH Manoa's Department of Geriatric Medicine, told Hawaii News Now. "They also had lower fasting insulin levels and got less cancer."

And while 5'2" is very short -- the average height of an American male is 5'9" -- the results were heartening for "taller" short guys too: Data showed that lifespan and stature were linked so that the taller a man was, the shorter his lifespan was as well: 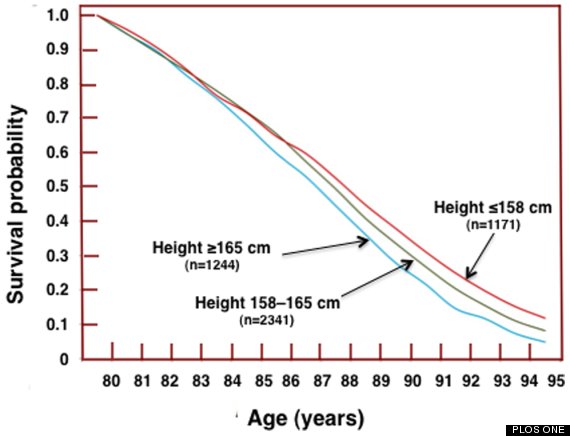 The research showed, for the first time, that the "longevity gene" FOXO3 is linked to human body size. "We knew that in animal models of aging. We did not know that in humans,” Dr. Willcox said in a statement. “We have the same or a slightly different version [of the gene] in mice, roundworms, flies, even yeast … it’s important in longevity across all these species."

"The small yeast, flies and mice have genes like FOXO3 that dampen insulin signaling and make them smaller from birth," said Dr. Willcox of the image above.

In order to make that same connection with their human subjects, Dr. Willcox and his team compared the genotypes of men that lived to be 95 years and older with those in the study who lived an average lifespan.

"What we found was that those who lived a long time versus those who lived an average time tended to have a certain version of the FOXO3 gene," Dr. Willcox told HuffPost. They discovered that people with the "protective" version of the gene had double the odds of living to 100 -- triple, if the person inherited that gene from both parents.

"If you're bigger you have more cells, so you have to grow more and you use up a lot of those cells," researcher Dr. Tim Donlon theorized to Hawaii News Now. "My feeling is that if you're shorter, you have a reserve of cells you can use later in life, and that might have some impact on why shorter people or smaller people have a longer life span."

As Hawaii News Now points out, the longevity gene acts "like a stress resistance gene. It sees problems and fixes them. For example, if there are too many cancer cells around, it will eradicate them. Everyone has it, but only 4 percent of people have the protective version."

“One of the reasons why Honolulu is perfect for this kind of study is that we have the longest-lived state in the country, combined with a population that has remained, for the most part, in Hawaii," Dr. Willcox said in a statement. He also noted that “no matter how tall you are you can still live a healthy lifestyle” to make up for not having the protective FOXO3 gene.

While the study could potentially apply to women and other ethnicities, researchers say that more research is needed to verify whether the results can be generalized beyond Japanese-American men. But Dr. Willcox seems confident that it will.