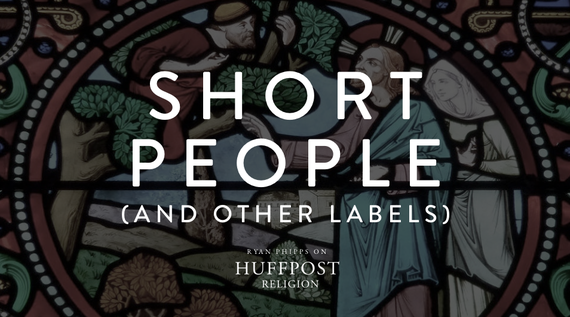 My spouse and I took our kids to the library at Bryant Park last week.

You may not know this, but it was Winnie the Pooh's 95th birthday, and they had the original Pooh family of characters on display.

They also had a mailbox set up where kids could send Winnie a birthday card, which my daughter was very excited about.

Anyway, about halfway through our library visit my two year old son was overtaken by exhaustion and started screaming in one of the few places in New York where it's publicly unacceptable to be screaming, so my spouse stayed at the library with our daughter and I took our son home for a nap.

It didn't take him very long to fall asleep riding in the stroller. He was out like a light in just a few blocks.

We were stopped, waiting for the light to turn on the corner of 39th and Madison, and I was looking down at my son sleeping peacefully, loved, safe, and at rest. Then I saw something else out of the corner of my eye.

I looked slightly down and to the right, and saw this. 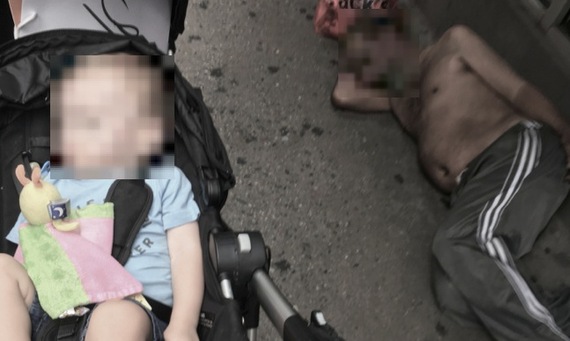 There was such a life-contrast between my son and this man that it nearly brought me to tears.

I am not one for taking pictures of the homeless. To me, it feels exploitative, but since the man was sleeping and there were very few people around, I decided to snap a quick picture to post online to draw some awareness to this heartbreaking contrast in one of the wealthiest cities in the world.

Just a few minutes after that I posted the picture online, comments of justice and compassion started stack up in the thread beneath the photo.

Then another thread started emerging. Someone didn't agree with my premise (imagine that). They commented on the photo and said, "Making people feel sorry for others doesn't change anything. That man needs to learn to rely on God, not on people."

I responded the person a few times, then realizing that I wasn't going to change their mind on the matter, quit responding.

This person claimed to be a Christian, so I couldn't understand how they could see this man through such different eyes.

We have members of our church who are currently homeless or who were formerly homeless, and having had the privilege of hearing many of their stories, it's caused me to take a deeper look at people than I used to. So many good, caring, brave souls who are living on the streets of our city just trying to stay alive and get by.

As I've gotten to know many of these men and women, I realize that the only difference between us is experience. Were I to have experienced what they've experienced, I would certainly be in the very same spot in life.

And this is what I was thinking about as I read the angry threads under the post.

If they only took the time to get to know people and hear their stories they'd look at all this differently.

Everything changes when you get to know someone. Relationship makes labels obsolete.

There's a story in The Gospel Of Luke about a man named Zacchaeus.

I've heard this story so many times, all the way back to my childhood.

Do you remember the song that accompanies the story?

Even today, I'm still confused by the meaning of the song. What's the lesson? That God loves short people? I mean, he does, but come on! It must mean more than that!

Who was the real Zacchaeus? We know from the story that he was a tax collector. But we have to be very careful not read a modern definition of this label into the story. If we do, we'll miss why this exchange between Jesus and Zacchaeus was so important.

Here are the facts.

If you were a tax collector in ancient Israel, you worked for the Roman Empire.

Many tax collectors were Jews who bought tax collection franchises from the Roman government and any amount that they collected over and above what Rome required, they could keep for themselves.

And in this way, many of the Jewish tax collectors became wealthy at the expense of their own people.

This is why Zacchaeus was so despised. He was literally robbing his own people to pad his pockets. Not only that, but his career strengthened the power of Israel's oppressor. He was financing the enemy.

And what does Jesus do? The text says these beautiful words.

Jesus looked up and said to him, "Zacchaeus, come down immediately. I must stay at your house today." So he came down at once and welcomed him gladly.

All the people saw this and began to mutter, "He has gone to be the guest of a sinner."

But Zacchaeus stood up and said to the Lord, "Look, Lord! Here and now I give half of my possessions to the poor, and if I have cheated anybody out of anything, I will pay back four times the amount."

Jesus said to him, "Today salvation has come to this house, because this man, too, is a son of Abraham. For the Son of Man came to seek and to save the lost."

Jesus was always doing things like this that went directly against cultural norms.

This a thread that runs through the ministry of Jesus that we see over and over again.

Jesus was always seeking to know the individual rather than judging them by the labels that society gave them.

You may recall two other examples, though there are many more.

Jesus befriends the Samaritan woman at a well. (John 4:1-26)
Samaritans were considered by full blooded Jews to be half-breeds, unclean, and outcast, but we see Jesus seeking to know her personally and hear her story.

Jesus befriends the woman caught in adultery. (John 8:1-11)
Jesus shrugs off the labeling and finger-pointing that is going on by the crowd around her and he kneels down and talks to her. He gets to know her and her story.

And yes, a tax collector who is being painted with the same brush as all the other tax collectors, even though he had it in himself to do good. Jesus goes to his house and gets to know him.

What if these examples, and the many more just like them in the life of Jesus are there for a reason? What if this theme matters?

Could this be what the heart of God for people really looks like?

What are your labels?

What do people whisper about you behind your back?

What do they mutter about you in the back rooms?

Sure, maybe they are even labels that your behavior has earned you, but in your heart, you long to be something else. You are something else, but everyone has labeled you as something damaged, broken, and as some kind of half-breed.

If the life of Jesus teaches us anything, it's that God longs to know us despite our labels.

God comes to seek and save those who are lost, not those who already know the way.

And this is where the world flips upside down for many of us who call ourselves "Christian." There are a lot of voices of "certainty" in this world. They shouting through microphones and megaphones, on television and on the radio claiming to know the way, the only way, and if you don't follow that way, you are labeled an outcast and an outsider.

You know what I always have wondered, though?

What if we can't find the way? What if we aren't capable of finding the way?

I'm always suspicious about that.

WATCH A SERMON ABOUT THIS TOPIC BELOW