(AP) BOGOTA, Colombia — Edward Nino Hernandez is in many ways a typical 24-year-old Colombian male. He loves to dance reggaeton, dreams of owning a car – preferably a Mercedes_ and wants to see the world.

Top on his list of people he would like to meet are Jackie Chan, Sylvester Stallone and former Colombian President Alvaro Uribe.

What sets Nino (pronounced NEE-nyoh) apart is his size.

He is slightly taller than a piece of carry-on luggage and weighs just 22 pounds (10 kilograms).

"He hasn't grown since he was 2 years old," his mother, Noemi Hernandez, said of the oldest of her five living children.

The previous titleholder was He Pingping of China, who was 1.5 inches (4 centimeters) taller and died March 13. The Guinness people discovered Nino afterward.

They say Nino's reign is not likely to last long, however.

Khagendra Thapa Magar of Nepal is expected to take over after he turns 18 on Oct. 14. He measures about 22 inches (56 centimeters) and is currently recognized by Guinness as the shortest living teen.

Doctors never could explain why Nino is so small, his parents say.

"They never gave us a diagnosis," his mother, Noemi Hernandez, said during an interview in the family's sparely furnished apartment in Bosa, a mostly poor district of southern Bogota.

She said doctors at the National University studied him until he was 3, then lost interest. She and her husband, a security guard, lost a daughter who was similarly small in 1992 when she was about to complete a year of life.

The couple's youngest child, 11-year-old Miguel Angel, stands 37 inches (93 centimeters) tall and has facial features similar to Nino. The other three boys are of normal height and appearance.

"I feel happy because I'm unique," Nino said in an interview Friday with The Associated Press.

He does, however, have his problems: cataracts in both of his eyes that blur his vision and, says his mother, require urgent surgery that the family can't afford.

During an interview, Nino's eyes water and he fidgets with the laces on his toddler-sized black dress shoes.

Other than his eyes, he has no medical complaints.

He's mentally sharp and laughs easily though it's sometimes hard to understand his high-pitched speech and his stubby fingers make writing difficult.

Nino had to repeat several years of school before dropping out in the eighth grade. But he's very sociable, loves to travel – though he hasn't been outside Colombia – and likes to play dominoes and checkers.

"He only gets depressed when he's shut in at home," his mother said.

Leafing through an advance copy of the Guinness World Records 2011 edition, which launches Sept. 15 in the United States and the next day internationally, Hernandez shows Nino a picture of the world's smallest woman, who is from India.

Nino says he already has a girlfriend. She's 18, is named Fanny and measures just under 5 feet (1.5 meters), he says.

Nino has earned some cash dancing at department stores and is now acting in a film in which he plays – What else? This is Colombia – a pint-sized drug thug.

In his big scene, Nino gets into a shootout.

He acts out the scene, mimicking a pistol with the index fingers of his entwined hands, then slumps over onto the chair's arm. His character doesn't survive the gunbattle.

Nino smiles broadly at the idea of more acting jobs and more life in the spotlight.

And he says he's gotten used to all the picture-taking.

But being the world's smallest man does have its drawbacks.

"It bothers me that people are (always) touching me and picking me up," he said. 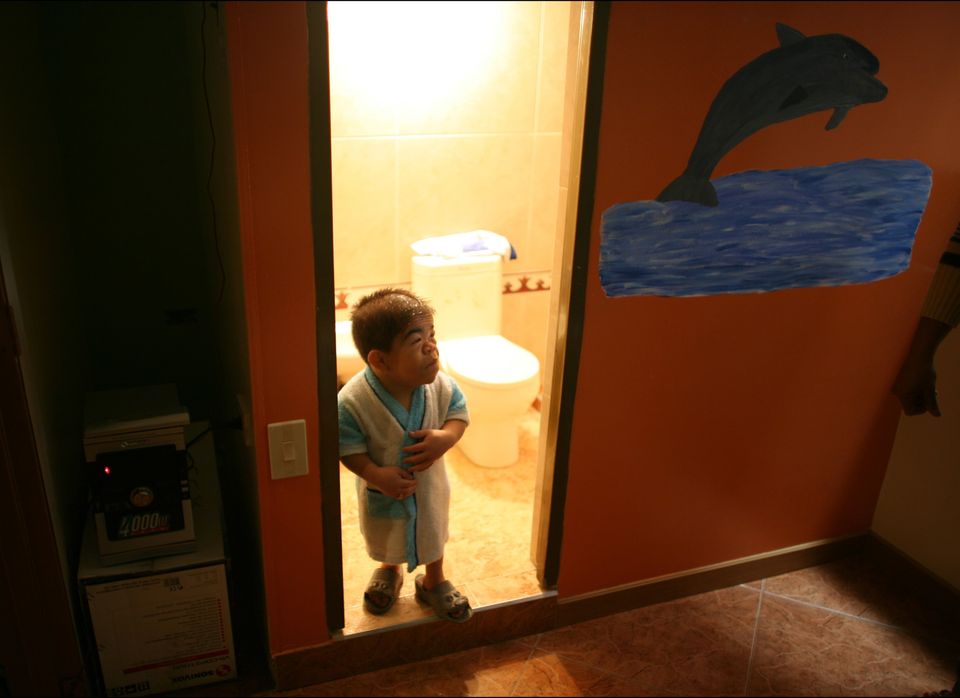 1 / 5
Standing in the doorway of his bathroom in Bogota, Colombia.
AP