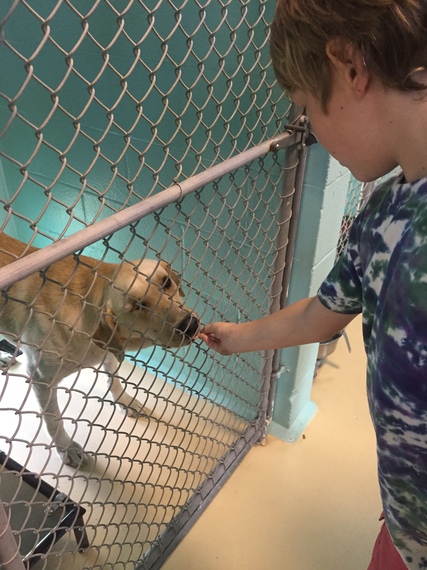 My son Brady, with Longshot, at the Dare County (NC) SPCA Shelter on July 30, 2015. Photo by Caurie Putnam

Longshot was once a celebrity.

The four-year-old yellow Labrador Retriever riddled with gunshot wounds and left for dead in Virginia in December 2014 made national news.

"An Accomack County sheriff's deputy brought Longshot in on Dec. 16 after finding the dog lying in a ditch, near death," said a January 8, 2015 article in USA Today. "Neighbors had reported hearing gunfire the night before, meaning the lab likely survived the cold night outdoors after he was wounded."

The public rallied around Longshot and names of people wanting to adopt Longshot piled up.

However, Longshot's injuries were severe and by the time he was ready for adoption, he was old news.

Those that initially wanted to adopt Longshot had moved on and he was moved too.

I met Longshot -- purely by chance -- a few days ago in the Dare County (North Carolina) SPCA Shelter in Manteo where he has been since July 2015.

My home is already filled with dogs, but I wanted to visit the shelter while on vacation in the Outer Banks to make a donation towards the adoption fee for a dog in need of a home.

"Who is this?" I asked the animal control officer escorting my family and I through the clean, but full shelter. "You don't know about Longshot?" she replied.

I had not heard the story of the dog whose name represents his life, but when she told me my heart broke.

My son Brady, 8, fed Longshot dog biscuits, which he took gingerly. He is a sweet dog and beautiful -- even with one eye and scars on his body.

"The media has forgotten about him," the shelter worker told me.

Not this member of the media.

I know there is a home out there for this special dog. 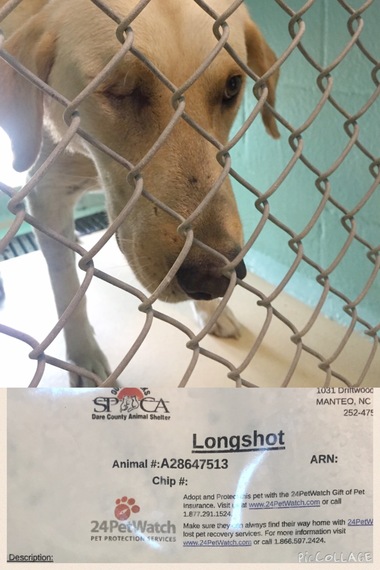 Longshot in a Manteo, North Carolina shelter on July 29, 2015. Photos by Caurie Putnam