If you are of a certain age, and of a certain mindset about how you should spend your weekends, you've probably gone out drinking with an emptied-out Coke bottle or Gatorade bottle filled with liquor and a mixer.

Furthermore, if you've ever prepared one of these to-go bottles, or taken a big juicy swig from one -- at the movie theater, or the public park, or the Chuck E. Cheese's, or wherever -- then you know that you have no idea just how much booze you've poured in, or how many shots of liquor you're actually consuming from your stealthy container.

A new app for the iPhone called Shots iGot wants to end your ignorance and let you know exactly how plastered you can expect to get from your plastic bottle concoction, all with the simple swipe of your finger. The people behind the app have mapped into it 44 different common containers that you might use as an impromptu flask, including a Solo cup, a Coke bottle, a soda can, the Slurpee cup and more, so that you can visualize the number of shots of you've poured.

You just choose the kind of bottle or container you're pouring your liquor into, and the app brings up a touchable model of that bottle; you then slide your finger to the level of the container that you've filled with liquor, and the app measures, in real-time, how many shots you're about to swallow down. 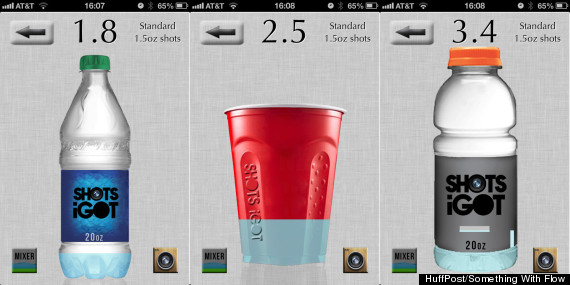 Three screenshots from the Shots iGot app, showing a 20 oz. bottle, the iconic red Solo cup and a Gatorade bottle, filled up with 1.8, 2.5 and 3.4 ounces of liquor, respectively. You can adjust the amount of liquor in the cup by sliding your finger up and down the graphic to the appropriate level.

Because it's a bit hard to imagine if you've never used it, here's a quick clip of Shots iGot in action. Though the design is simple, it runs smoothly, and it's quite easy to figure out how to use:

The app assumes a standard 1.5 ounce shot and is accurate down to one-tenth of a shot, according to Paras Jain, one of its creators. The inspiration, Jain said in a phone interview, comes from a very real place.

"My buddy Josh [Rosenheck, now CEO of their startup] and I, we both were at our fraternity at Rutgers, and we used to see girls and guys carrying out bottles around all the time," he said. "And the girls would say, 'How many shots do you think I have in here?'"

"One day my buddy Josh ... said to me, 'Wow, now there's an iPhone app -- that you can just virtually see the number of shots,' and it just clicked."

They sought out developers, eventually finding two at a hackathon on the nearby Princeton University campus. Soon, after carefully measuring 44 different drink containers and mapping them into Photoshop, Shots iGot had launched in the app store. About 10,000 sneaky booze drinkers around the world have downloaded it so far, and Jain, Rosencheck and developer Mike Verderese have formed a startup, Something With Flow, to promote the app and explore possible corporate partnerships.

For now, though, the Shots iGot app serves a specific and useful purpose, encouraging smarter, more informed alcohol drinking on college campuses (and sports arenas, and rock concerts, and the office, etc.). Rutgers, Jain said, is even considering introducing the app to incoming freshmen to promote safe drinking. Of course, that would open up the can of worms of whether the school should be preaching abstinence or safety -- an argument that the public university likely does not want to get into, Jain said.

I, on the other hand, encourage all of my readers who drink liquor out of repurposed plastic bottles to do so responsibly -- for them, Shots iGot is an excellent resource. You can download a free version of Shots iGot, which gives you a limited number of containers; to unlock all of the containers, you can pay $1.99 for the full version here.