When we knew we wanted to begin trying to have a baby, Kelley got off the birth control she was taking several months in advance. Then, like most couples we tracked days/cycles and other typical things you do as you begin trying to conceive.

I was ignorant to most of how this all worked, and Kelley had to explain a lot along the way. To me, I thought our first try would yield an instant positive on the pregnancy test and then we just wait it out for nine months. Go ahead, laugh, and if you see me in person, laugh in my face; I'll understand.

Well, almost a year later and we were still trying with no luck. I didn't get it, we were a healthy couple who ate whole foods, never went out to eat, drank only in moderation (we usually share one beer), and exercised daily. So what was keeping us from creating our perfect offspring?

By recommendation of Kelley's doctor, we made our first of many visits to a fertility clinic to see what was (or wasn't) going on. After examining Kelley and testing one of my "samples," the doctor found several factors working against us.

I'll keep it short and just get to the point; they though Kelley had a uterine septum requiring surgery and I had an abnormally low, errrrrr... count. The doctor referred me to another doctor for a thorough analysis of my blood and scheduled surgery for Kelley.

Kelley's surgery went off without a hitch, but required more than one stitch (sorry, had to)! Actually, she never had a uterine septum, the sonogram just made it appear that way, but she did have endometriosis which the doctor removed during surgery. My blood results, on the other hand, came back with several abnormal levels; low T being one of them. I also had iron deficiency anemia, low hemoglobin, and others I can't remember. Probably for the best!

This was hard for me to accept; extremely hard. I strive to live a healthy and active lifestyle, and this is all I have to show for it?! I just couldn't wrap my head around how this was possible since I stress the importance of being so healthy. Remember that bold word in italics....

I was prescribed HCG injections twice a week to combat my low levels and they would monitor how I responded. The doctor helped explain how to give myself injections in the lower abdomen at home, and this became the norm every Thursday and Sunday each week.

A while passed and I had the whole giving-myself-shots thing down pretty well, but still no results. An updated blood test showed my levels were barely up. The doctor suggested we try IUI as this seemed like we had a good chance with the procedure.

I was given two new meds (thankfully just pills!) to help with my thyroid function, and Kelley was given several prescriptions as well, including shots. Poor wife, she cringed at the thought of giving herself shots. Luckily, she had a husband who was now pretty good at it, so I signed up to administer her shots.

She was hesitant with the stomach shots at first, but after I proved to her that I wouldn't hurt her, she became accepting... somewhat. We went through two cycles with IUI, and although the norm is to try three before looking for other options, the doctor then suggested IVF. Being the impatient person that I am, I readily agreed and thankfully so did Kelley.

To stimulate the growth of her ovaries, Kelley needed daily shots in her stomach. That's right, shots, plural. One to help her eggs grow, and another to help keep them from over-growing since Kelley was expected to respond well.

The eggs grew just as needed, and it was time for retrieval. After retrieval, Kelley needed another injection to help prepare her uterine lining for when the fertilized eggs were implanted. So, it looked like I would still be giving shots to everyone in the house.

But then there was the location of these new shots... the butt! Yep, the butt. The stomach was one thing, and the needles were tiny, but the butt meant bigger, longer needles!

I'd have to work within a specific area of the buttocks, use enough force to get through to the muscular region, make sure the needle went in straight, not angled, and make sure no blood came into the syringe as that meant I did something wrong. This was to happen every day precisely at 7:00 p.m. for approximately seven weeks. Oh man, the nerves, the needles, the stress!

Even those times when we were arguing and not talking to each other, I'd still have to give her the shots in the rear, which was awkward, but necessary. Luckily, I never had blood come into the syringe, but there were times when I had to hold gauze over the area after administering... sorry, Kelley.

Finally, after the first few days of shots in the "dark" (my reference to ass), it was time for implantation! We had several outstanding embryos to choose from, made a tough decision to only implant one as opposed to two eggs and thankfully all went well!

Long story short, our first round of IVF was a success! We proceeded with the butt shots to complete the seven weeks worth and keep Kelley's uterus in good condition for the newly implanted egg.

Doctors were still trying to figure out the cause of my low counts and anemia to no avail. They performed an endoscopy of my upper GI tract to see if it was an absorption issue, and even collected tissue for a biopsy; this didn't help either. Really should've looked into stress more!

We still remember the first positive test Kelley took. She woke up at 5:00 a.m. since it's best to take after sleeping and not peeing for a while, and tested. It was dark, and she didn't see anything, so she tossed the stick in the trash and came back to bed upset.

Later that morning, I was going to throw something away and saw the stick and what appeared to me to be a faint line. I had no clue how to look at a pee stick or what it meant, so I just held the thought to myself for a while. Then Kelley did the same double take at her trashed test and noticed the line as well... we confirmed a positive!

From there we experienced the ups, downs, scares, and joys of pregnancy and now we have the most beautiful baby girl! I can't believe she's already 8 months old and that part of our past is behind us. It wasn't fun, but so worth the outcome. 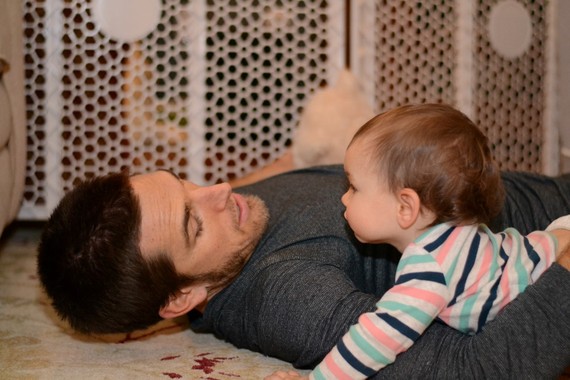 Back to that stress word. I stressed a lot while working in my office job as I despised the sedentary setting and well, I stress over things way too much. Working out, cooking meals for the both of us, and going to a job I didn't like each day took its toll on me. Some are good at accepting this, I am not one of them.

This stress that built up over the years was what actually affected me mentally and physically in ways I never thought possible. It was the cause of my low numbers and something the doctors never considered, myself included. How could a non-tangible thing wreak so much havoc?

Now that I'm a stay-at-home dad, I am positive my levels are good, and I'll be damned if they aren't outstanding!

Have you or are you currently going through difficulties in trying to conceive?

If you care to share, please do. You can message me privately at RCrown2@aol.com if you'd like as well.