Costco Connections, a publication of the discount variety store chain, provided a venue for pro and con essays on the right of adopted adults, which many states deny, to access their own true birth certificates. 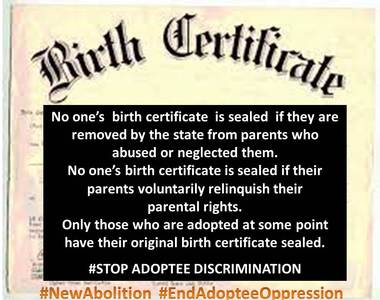 The affirmative argument is presented by April Dinwoodie, Chief Executive, the prestigious Donaldson Adoption Institute (DAI), an organization with no ulterior motive or financial backing that would impact their conclusions. It is on point and factual, backed by extensive research of experts in the fields of child welfare and law as it relates to this issue conducted by DAI. Their position is in keeping with the AMA, The American Pediatric Association, and The Surgeon General, all of whom recognize the importance of a family medical history which adoptees are denied without access to their original birth certificates. The DAI's position paper on access is available here and here.

The negative argument is presented by Megan Lestino, of The National Council for Adoption (NCFA), the lobby for those whose income is dependent on adoption fees. The NCFA has for decades opposed adoptee access, alleging that they speak on behalf of mothers who have lost children to adoption, the 1-2% of such mothers who live in fear of having their secret exposed. Lestino admits that it is the "less frequent cases," or minority, of mothers for whom the NCFA is feigning concern. What other laws protect a tiny minority while causing harm to other citizens by denying their rights?

Rather than presenting any facts, Lestino begins with flowery expressions of honoring "every unique adoption story," strengthening the "culture of adoption," and celebrating adoption practices, which she admits have become "increasingly open and less secretive, minimizing any inappropriate belief that adoption should ever be something to be ashamed of."

Indeed, adoption is not and should not be anything to be ashamed of or embarrassed by. As Dinwoodie points out, today we live in an age of truth, openness, and honesty about a great number of heretofore taboo topics. Yet despite saying adoption should never be "something to be ashamed of," the NCFA's entire argument is about "protecting" mothers who want remain ashamed, thus perpetuating a need for secrecy and shame in adoption, the very thing they claim is unwarranted and wrong.

Lestino goes on, writing another entire paragraph that makes the argument to allow access:

"A society that accepts and respects the positive practice of adoption should allow individuals involved - adopted individuals, the birth family, and the adoptive family - to feel accepted and validated if and when they choose to share. ... [T]he story belongs to those affected - not onlookers."

Lestino is absolutely right. "The story" belongs to those affected, and one's birth certificate is a major part - in fact the very starting point - of one's "story." It is critical to, and should belong to, the adoptee, according to Lestino herself. Regarding "onlookers," no one is proposing or ever has suggested making any adoption records open to the public.

Lestino is right in saying that those involved should control their own stories and lives. These are, after all, ADULTS: tax-paying, voting citizens, many of whom have served in the military. As such, the 14th amendment that ensures all laws apply equally to all US citizens should apply here. No one else is denied access to her or his own birth certificate. Laws that seal adoptee records apply to just 2% of the population and are thus discriminatory, violating the civil and human rights of those adopted by treating them unequally as compared to their non-adopted peers.

Lestino correctly notes that "many [adoptees and their birth families] may choose full, open direct communication." - She follows this fact, however, with the contradictory recommendation of intermediaries for such contact. It seems that Lestino needs to look up the definition of "direct communication."

Coscto posed the question to the general public, who can still vote at this link. Some of the voters' comments are included alongside the two essays. Many of these are obviously written by people who know nothing of the topic on which they are commenting. For instance, someone named Janelle LaMotte Shumaker says: "I believe you are promised anonymity when you make the very hard [decision] to give up a baby. That should be respected."

This is a very common assumption, albeit an incorrect one. .

Another voter identifies himself as an adoptee and says that his birth parents' rights "trump" his. It is sad, but understandable, internalized oppression to believe that another's rights trump yours.

The Sealing of Adoptee Birth Records

It is important to understand that adoption records were not always sealed - and have never been sealed in Kansas or Alaska - and no one has ever objected.

The records began to become sealed, state by state, in the 1930s, allegedly to protect adoptees from stigma at a time when birth certificates of babies born to single mothers were stamped "illegitimate." Records also indicate that the right of the adoptive parent to privacy from the birth mother was a major concern. It was an era of shame and secrecy, including embarrassment about being infertile.

Adoption records were sealed at a time when social workers counseled adopting parents not to tell their children they were adopted, lest the child feel less a part of their family. Thus the sealing of the true birth certificate, and the issuance of a falsely amended certificate making it appear that the child was born to the adoptive parents, provided a legal seal of approval to the lie.

It is also important to note that as the states sealed adoption records - including original authentic birth certificates - most states sealed them in two steps: first to the public and then, years later, to the adoptee.

It is interesting that Lestino begins her argument about confidentiality with the word "if" stating: "If confidentiality has been promised and remains desirable..." She is surely aware that no historian - nor the NCFA - has ever turned up is any indication whatsoever that there was ever any concern for the privacy of birth mothers in the sealing of the records. Lestino is also well aware that, as Dinwoodie points out, there is no constitutional right to privacy or secrecy.

Additionally, Professor of Law Elizabeth Samuels conducted an extensive review of the paperwork for relinquishment of parental rights signed by mothers in order for their children to be adopted. None included any promise of anonymity or confidentiality.

The history of the sealing of adoption records also shows the role of black-market baby brokers like the notorious Georgia Tann in persuading their politically connected clients to create secrecy. It is thus very telling to note that, to this day, the opposition to removing the veil of secrecy in adoption comes from the adoption industry itself. The NCFA is as concerned about the privacy of mothers as the NRA is concerned about the welfare of school children. As stated in the introduction to the pro and con arguments, adoptee records are not sealed when a mother relinquishes her rights, or when rights are terminated because of alleged abuse or neglect.

They are only sealed if and when an adoption is finalized, so that it is impossible to guarantee or even imply confidentiality when a mother relinquishes a child, and she will likely never know whether in fact an adoption takes place. Once parental rights are relinquished, the mother no longer has any legal standing and is not present at or notified of an adoption. Thus all the records containing her name may in fact be open and accessible.

Why should adoptees be singled out with restrictive laws that apply only to them when even convicted felons have unrestricted access to their birth certificates? These laws are in violation of adoptees' civil and human rights and treat then as a suspicious or potentially dangerous class of people.

"...mothers have all the power. Mothers alone can decide if their children have the right to know who their mothers are. Mothers are in charge. You're adopted? Too bad. You want to know whose DNA you share, what your medical history is, who you look like? Too bad. You are a second-class citizen and your mother retains her right to live her secret life, and deny your existence."

Any parent who placed a child for adoption is at risk of being found with or without adoptees having access to their records. Adoptees have always found ways to search out their blood kin and today are using social media and DNA testing services. As I have pointed out previously, adoptee access protects their parents' privacy. A birth parent's best defense against being found via social media and having the "story" publicly exposed, or shared first with extended family or ex-partners, is to go on the offensive and tell the current spouse and children. If they choose not to do this, then they can sit back and wait for a letter, knock on the door, or phone call. Most adoptees use care and respect when making contact and try to make it as directly to their parents as possible.

Once contact is made, the choice to meet is totally in the hands of the two adults involved, just as it is with any other two adults who meet via any means. If someone does not take "no" for an answer to a further relationship, there are laws in place to protect us all from harassment and stalking. There should not be additional laws that treat adoptees or their parents of birth as criminals from whom anyone needs "protection."

Mutual consent registries such as the NCFA proposes are an insult to adopted citizens and fail to provide them equal rights.

Let us not celebrate another National Adoption Month until all adoptees have their rights restored.