Those damn Plastic Cups. I don't promote bottled water, but the plane is a place where it actually might make sense. At the end of one long-haul flight you can easily find yourself with five one-time use plastic cups on your hands. Five! And there's a good chance all of this junk is going straight to a landfill, as few airlines recycle. And the airlines that do have recycling programs, such as Delta, only do it for certain routes. 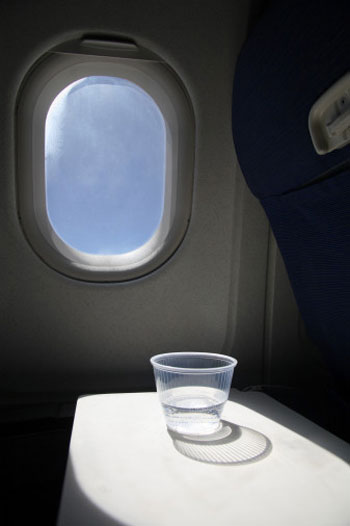 Now let's think about this a bit: These cups, filled from a bottle to start with, are probably packaged with a group of their identical flimsy friends in a plastic cardboard box, with a whole bunch of other cardboard boxes on a pallet, itself wrapped in plastic. And the pallet was probably shipped via a big truck, or boat its place of origin. That's one ridiculous footprint.

If passengers just receive one reusable cup -- or better yet, the bottle and no cup -- during a long flight, you effectively remove an entire chain of waste.

Going the dreaded bottled water route might be better here, but it's still lacking...we need a real solution. Have an idea? Comment below!

More on Disposable Cups from TreeHugger
::I am Not a Paper Cup
::Bring Your Own: Reusable Bags, Cups & More