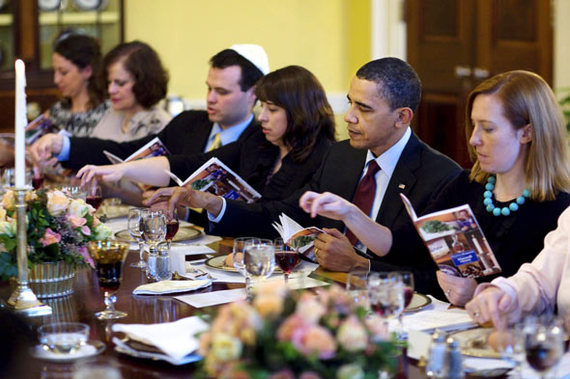 One of my lasting memories from college is celebrating Passover with Chelsea Clinton. We shared the Passover meal with several friends, and during it I asked her if she had ever celebrated Passover. She told me she had attended Passover seders (the ritual meal) her whole life.

As I wrote my first book on Passover, I discovered she is only one of many Christians who regularly do. President Obama hosts a Passover seder at the White House every year. Many churches host a Passover meal on Maundy Thursday, the evening before Good Friday.

For Jews Passover begins in less than two week. Should Christians explore it as well? Absolutely. It teaches universal values that can transform our lives. To me the following the are the most powerful:

1. The meaning of freedom: The Israelites were slaves in Egypt for 400 years. Then in an extraordinary act of deliverance, God brought them to freedom. It was God's first great act of redemption.

When we observe the Passover meal, we remind ourselves that God's redemption did not just happen in the past. Each of us can experience. We are not stuck where we are.

Passover compels us to ponder anew the places in our lives where we feel trapped and inadequate. We see where God's outstretched arm can renew our lives and faith.

2. The importance of empathy: One of the central customs of Passover meal is tasting bitter herbs. In doing so we are supposed to imagine that we ourselves--not just our ancestors thousands of years ago -- were slaves in Egypt, and that God freed us and led us to the Promised Land.

It also reminds us of the contemporary resonance of the Passover theme. When we eat the bitter herbs, we awaken our conscience to the bitterness felt by oppressed people around the world experience today. Tasting the bitter herbs not only creates a bridge to the past, but also to the others in the present.

3. The centrality of Jerusalem--and of peace: The closing song of the Passover meal is "Next Year in Jerusalem." During the lifetime of Jesus, Passover was celebrated with a massive gathering of the Jewish people in Jerusalem. It was, by some accounts, the pinnacle of the year.

Yet, from 70 C.E. until the state of Israel became a reality1948, no Jews lived in freedom in Jerusalem. Even today the city remains plagued by violence.

Thus, our concluding prayer is that God will redeem us and the world by allowing Jews to live in freedom in Jerusalem. This same hope underlies the story of Jesus' triumphant return to Jerusalem as depicted in the Gospels. This story is so central to Christianity that it is one of the few that appears in all four Gospels. Jerusalem and peace go hand-in-hand.

To say "Next year in Jerusalem" is to say we will work to realize this vision. If Jerusalem is at peace, the world will be at peace. This dream unites not only Christians and Jews, but all those who seek to build a home for God here on earth.
Are you interested in trying Passover? Get a free script for a Passover meal